Being an Uber driver doesn’t seem like a great job. Conditions aren’t great and the rate of pay, already typically less than the minimum wage, is declining.

So why do Uber drivers keep driving?

When we asked them, they told us the job was better than any others they had.

That’s something that should concern us all.

Across the world the proportion of people in “insecure” jobs is creeping upwards. Less than half of all Australian workers now have permanent full-time jobs.

As the “gig-economy” grows, casuals and contractors without protections such as paid leave and job security may become the new normal. So too may be the experiences of those who end up driving for Uber.

The best of a bad situation

Our team interviewed 24 Uber drivers in Brisbane. Most had worked in hospitality or service sectors. These drivers were earning A$10 to A$17.50 an hour. Almost all reported some form of economic insecurity working for Uber.

Yet most said they were satisfied working as a “driver-partner” because their other options were awful. Many turned to Uber because of chronic underemployment, with their current job not giving them enough hours.

According to the Australian Bureau of Statistics, 8.1% of Australian workers are underemployed, up from 2.5% in the 1970s. The graph below shows Australians want more work but aren’t finding it.

Surprisingly this was an experience related to us by drivers who had been working in areas such as advertising, business management and finance. They told us about “commission only” jobs, and having to “win” projects from potential employers, which meant they always felt insecure and didn’t have reliable income.

Uber was essential to them in making up the difference. In fact, for many Uber became their primary income.

Others told us about even worse working conditions at their old jobs. Former hospitality workers struggled with too few hours, unpaid work outside of shifts and terrible managers.

While they earned less per hour driving than working at a restaurant, they were free to work as long as they wanted. That flexibility meant they could do things such as pick up their children from school without having to take time off.

So in many ways Uber has been a step up for these workers.

While Uber drivers have greater flexibility and earn extra income, should workers have to choose between bad and worse?

This points to a bigger problem than just ride-sourcing: precarious, insecure and non-standard work with uncertain job length, few benefits and unpredictable pay is becoming an issue for more and more Australians. 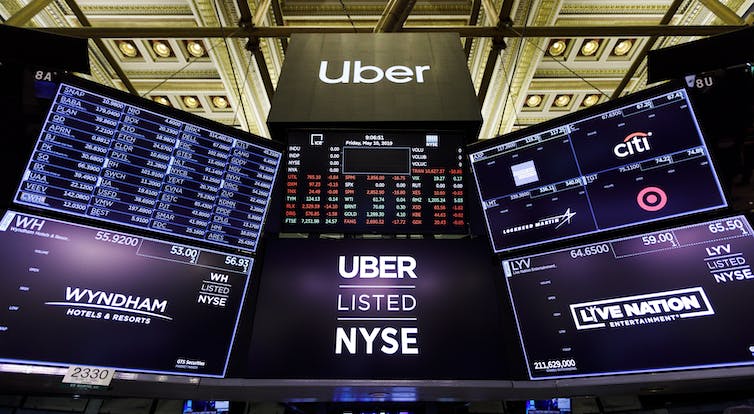 Uber listed on the New York Stock Exchange on May 10, 2019. Its share price has fallen from the US$45 of the initial public offering, but the stockmarket float has still made a handful of company owners extremely wealthy. Justin Lane/EPA

The Australian Council of Trade Unions regards Australia as a “global pacesetter in creating precarious jobs”. It says about 4 million people now work on short-term contracts, for labour hire companies and as so-called independent contractors, as is the case with Uber drivers.

The proportion of Australian workers in some type of non-standard employment is the third-highest in the Organisation for Economic Cooperation and Development (behind the Netherlands and Switzerland), according to a 2015 report.

Non-standard work includes any job that is not full-time and permanent. It is less likely to have the same rights and entitlements, such as sick leave and paid holidays.

This type of employment was historically common in industries such as hospitality and retail. But our interviews with skilled workers turning to Uber presents evidence that non-standard work is spreading to other industries.

Read more: Sugar daddy capitalism: even the world's oldest profession is being uberised

Businesses such as Uber use legal loopholes to avoid responsibilities as employers. As more companies try to “uberise” their workforce, the future of work becomes more precarious.

Worker organisations are important for protecting individual workers. But federal and state governments must do more to close the legal loopholes and protect all workers.

The most important change is ensuring workplace laws cover non-standard workers. The law should ensure contractors such as Uber drivers are protected from unfair dismissal, minimum wage violations and safety violations.

Non-standard forms of employment can be useful for entrepreneurs, primary carers and students. But without basic guarantees of income and regular work, contractors are at the mercy of whoever pays their bill.

If almost half of Australians are precariously employed, we need a change.