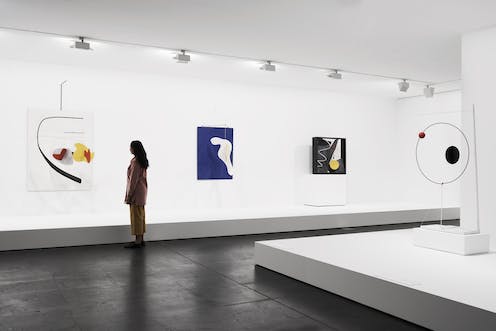 “This is no ordinary painting – it is a living picture that moves!” So says one of the “For kids” labels in the...

“This is no ordinary painting – it is a living picture that moves!” So says one of the “For kids” labels in the National Gallery of Victoria’s impressive exhibition, Alexander Calder: Radical Inventor.

The exhibition is an elegant testimony to the living, breathing work of art, charting Calder’s atypical path into the modernist canon. It is also great fun, curated with care and a sense of play by the Montreal Museum of Fine Arts and the NGV. 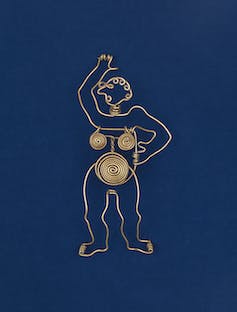 Calder (1898-1976) was born into an American family of established artists. Both his parents received formal art training and practised: Calder’s mother Nanette set up an easel in the corner of the living room, while his father Alexander operated a professional sculpture studio.

Calder’s career bridged both domestic and the professional, as the NGV galleries compellingly narrate, moving from intimate, domestic objects (including spoons, jewellery and, significantly, toys) to scale models for the monumental works that occupy urban spaces across the world. 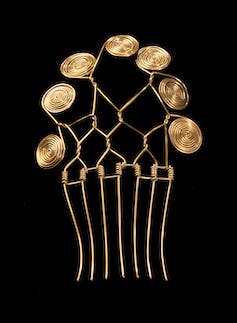 The exhibition starts with a self-portrait in his “workshop” and two gifts to his parents from the eight year old Calder: a rocking duck and a dog. Both are tenderly made from single sheets of brass, fitting in the palm of the hand.

Witty, efficient, emotive and in motion, they signpost the concerns underpinning a career that generated 22,000 works over six decades, received over 250 commissions, and exhibited on five continents.

Despite an early affinity with the art world, Calder chose to study science and graduated as a mechanical engineer in 1919. After trying various jobs, he joined the famous Art Students League in New York in 1923 where he studied until 1925, by which time he was working as a freelance illustrator. 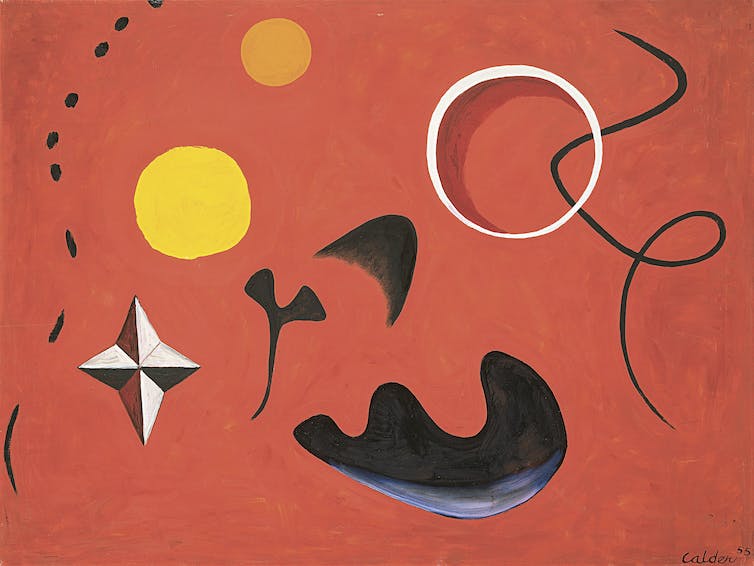 He developed a portable “drawing table”, which allowed him to capture fast moving scenes through fluid drawings in ink and pencil, including animals at the New York Zoo and what was to become a key motif, the circus. Invention, speed and sinuous line became the vocabulary for his emerging artistic identity. 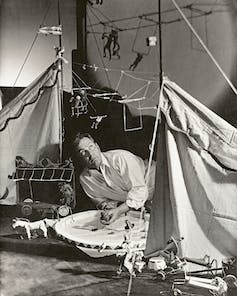 The obvious joy Calder took in his practice overflows in the Cirque Calder works. Using found objects, scraps and discarded materials, this ongoing project presented a miniature circus for family and friends, growing to over 300 items, including 69 miniature figures and animals.

This work is presented as still objects in the exhibitions as well as in footage of Calder himself bringing the circus to life, recorded by Hans Curlis (1929), Herbert Matter (1950) and Jean Painleve (1955).

During Calder’s years in Paris in the late 1920s, guests at these performances included some of the most famous names in European modernism, such as Jean-Paul Sartre (who wrote a 1946 catalogue essay for Calder), Jean Arp, and Marcel Duchamp. These artists fostered Calder’s work, recognising the irreverent, radical ideas that he brought to art making at the time.

The now commonly used term “mobile” (meaning both moving object and motive in French) was first invented by Duchamp during a studio visit in 1931 to describe Calder’s balanced, agile forms; while Jean Arp coincided the term “stabile” to differentiate Calder’s static forms. 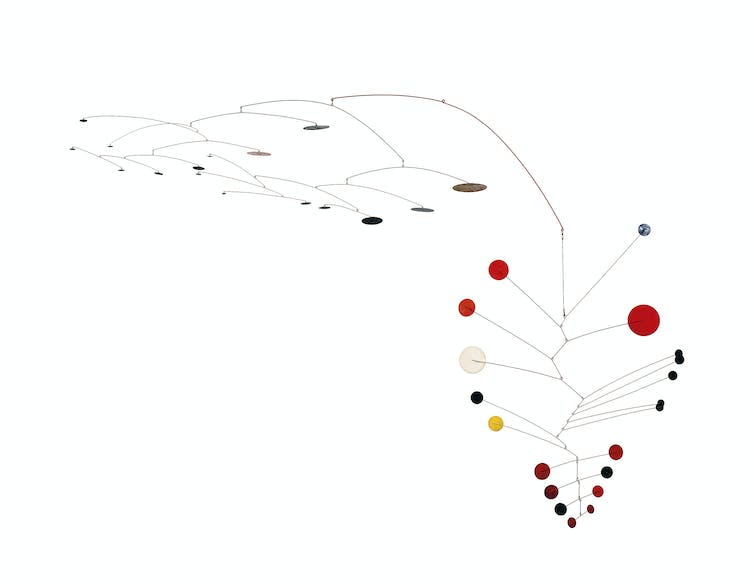 This exhibition originated at the Montreal Museum of Fine Arts, but the NGV makes masterful use of its gallery spaces in this iteration. We move from intimate spaces where shelves and alcoves display the delicate early toys and domestic works at eye height, to transition spaces with stacked asymmetric plinths and double-height galleries in the penultimate space, in which major suspended mobiles hover above the viewer’s body. 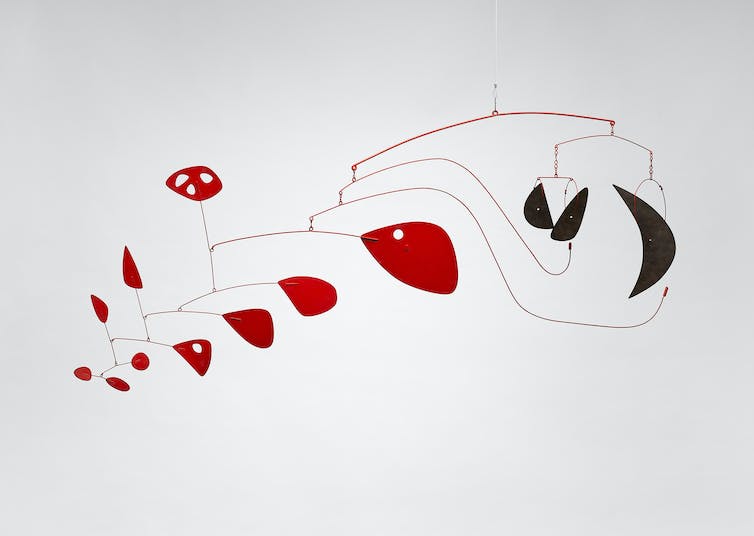 Looking up at the dramatic white, red and black forms gliding overhead, we seem to be suspended ourselves, somehow floating as if underwater. At its best, Calder’s work disrupts our usual perception of gravity, somehow inverting floor and ceiling as the baseline for orientation.

One disappointment is that the work does not culminate with the full-scale public commissions; in Montreal these would have been a given. Arguably Calder’s most famous commission was for Expo 67, held in Montreal, where his Trois Disques (1967) formed the centrepiece then, and is again the focal point of a current urban redesign.

Australia is home to Calder’s major work Crossed Blades (1967), commissioned by Harry Seidler for Sydney’s Australia Square, referenced through a maquette in the exhibition. The final room resonates with this absence, presenting studies for a number of late, large scale commissions that can only point towards the culmination of his vision. 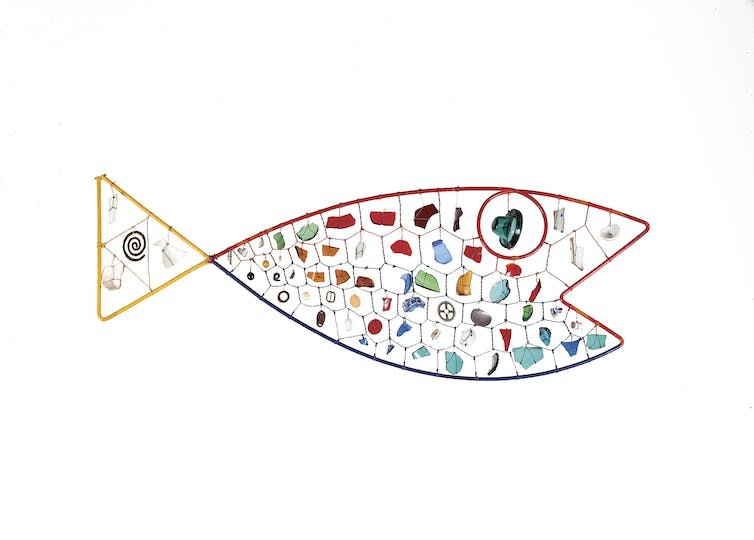 Any sense of lack is quickly displaced by the delight of the NGV Kids Room. Returning to the deep sense of play running throughout the exhibition, we design and make our own animals from sheet material; or create a public sculpture out of found objects through touch-screen bricolage. There is, of course, a selfie-site, and a beanbag corner where parents can retreat, listening to the music of the Paris Jazz Age.

The exhibition finishes with the same values with which it began. As Georges Mounin suggests in the handsome catalogue accompanying the exhibition: “[Calder] gets us to look at his ‘mobiles’ with the same sense of silent wonder, the same rapt attention, the same outwardly invisible joy that we experience as children”.

Alexander Calder: Radical Inventor is on at the National Gallery of Victoria until August 4.