Current smelting emissions from the Nyrstar smelter in the South Australian city of Port Pirie continue to pose a clear risk of harm to local children, our research has found.

Port Pirie has been a world-leading centre for lead and zinc smelting and processing since 1889, exposing the adjoining community to dangerous lead contamination for more than a century.

Read more: Lead poisoning of Port Pirie children: a long history of looking the other way

Based on our results, which are in turn based on government data, we would argue that protection of public health and the environment must be made a higher priority than the present focus on economic opportunities. 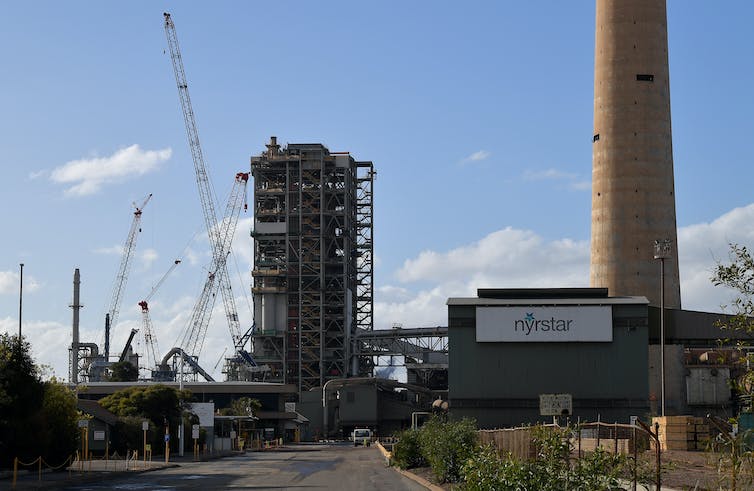 Half of children in Port Pirie exceed the maximum acceptable blood lead levels, according to Australian standards. David Mariuz/AAP

Lead in blood, even at low levels, has a range of adverse health impacts, including reducing IQ, lowering academic achievement, and socio-behavioural problems.

In 2018, the percentage of Port Pirie children under five exceeding the Australian intervention blood level of 5 µg/dL rose to 50.5%, compared with 47.4% in 2017. Mean blood lead concentrations rose in all children to 4.8 µg/dL.

Blood lead levels in children aged two, who are considered the most sensitive indicator of lead exposure trends in the city, rose to an average of 5.8 µg/dL in 2018.

A recent University of Adelaide study looked at children from Port Pirie and the New South Wales town of Broken Hill. It calculated that 13.5 IQ points were lost when a child’s blood lead level increased from 1 to 10 µg/dL.

Therefore, the estimate of loss for Port Pirie children with an average blood lead level is around 6 to 8 IQ points. To put this in perspective, the average IQ is around 100.

Multiple studies of the long-term effects of lead exposure show its adverse effects do not improve with age. In one New Zealand study, children who had high lead exposures reported lower cognitive function and socioeconomic status at age 38 than those who didn’t.

Elevated concentrations of air lead results in the deposition of lead-rich dust, which Port Pirie children are seemingly unable to avoid.

The smelter company, Nyrstar, monitors lead levels in the air daily. In 2017, the average lead in air measured across all four of Port Pirie’s EPA monitors was more than double the Australian standard, at 1.13 µg/m³.

In 2018, the smelter only met the Australian standard by closing part of its operations for several weeks.

Our study shows Port Pirie’s lead in air concentrations need to be 80% less than the current Australian standard of 0.5 µg/m³, at no more than 0.11 µg/m³.

Children under five would be better protected at this level, as it would help their blood levels remain below the maximum acceptable Australian blood lead level. However, to protect two-year-old children, lead in air concentrations need to be even lower at 0.082 µg/m³.

Therefore, application of the current Australian lead in air standard of 0.5 µg/m³ at Port Pirie fails to adequately protect children from adverse exposures.

Sulfur dioxide is a well-known health risk for respiratory diseases. Surprisingly, our study is the first to examine its impact on respiratory health in Port Pirie despite it being a known problem in the city for decades.

Port Pirie residents visited an emergency department with respiratory symptoms at a higher rate than the rest of South Australia, with children being disproportionately affected. 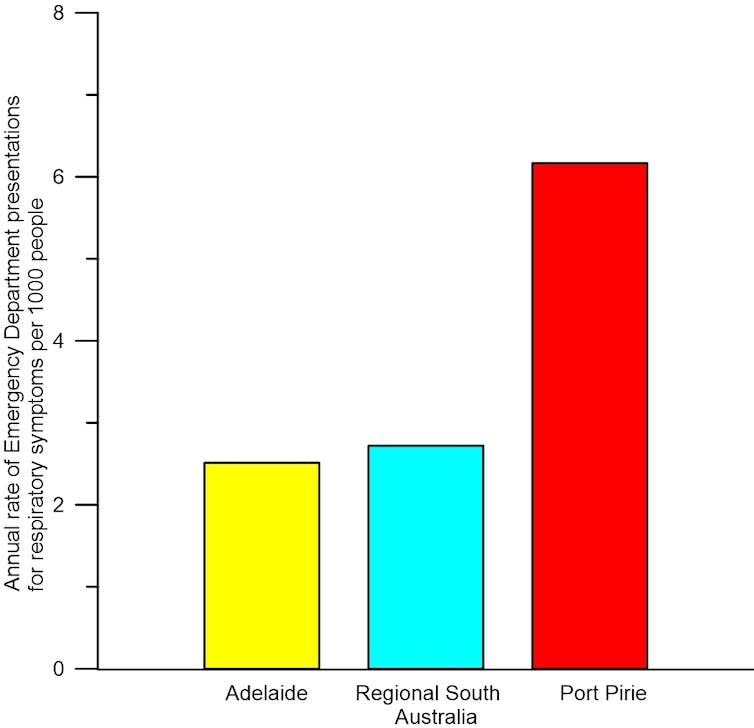 Port Pirie residents rates of Emergency Department presentations for respiratory symptoms are more than double those for the rest of South Australia.

The Australian standard for sulfur dioxide is 0.2 parts per million averaged over one hour. This value has been exceeded 896 times since 2003.

Remarkably, there is currently no legal requirement in Nyrstar’s environmental licence for it to meet a particular air standard for sulfur dioxide in Port Pirie.

Even our national standards may be too generous as the sulfur dioxide levels recommended by the World Health Organisation are even lower than those set by the Australian standards.

As a minimum, to better protect the residents of Port Pirie, the Australian standards for sulfur dioxide must be enforced.

A matter of politics

No other city in Australia experiences air quality like Port Pirie. The city’s population has the worst combined outcomes for sulfur dioxide exposure and blood lead in Australia.

Established public health programs in Port Pirie have aimed to reduce blood lead in Port Pirie’s children. Playgrounds are washed and residents advised to wash their hands, surfaces and food. But previous research has found that playground washing results in only short-lived exposure reduction and effective treatment requires elimination of smelter emissions.

Of the political and government agency decision-makers, we ask: why did you not intervene sooner to prevent vulnerable members of the population from being exposed to toxic substances that are known to cause serious short- and long-term health problems? Would you be comfortable with bringing up your family in such an environment, where damaging but preventable toxic exposures are inescapable?

We anticipate the outcomes of the approximately A$660 million Nyrstar smelter transformation project with interest.

In a statement to The Conversation, Nyrstar noted it was undergoing the most significant transformation of the Port Pirie smelter in its history, and was committed to reducing emissions as a result:

That is the focus of the company and its entire workforce and Nyrstar has been working closely with the community through the decommissioning process. When complete it will be among the world’s most advanced facilities of its kind; full ramp up and stable low emissions should be achieved by the end of 2019. – Nyrstar

The most recent air quality, particularly sulfur dioxide levels, suggests there have been improvements, but there’s a still a long way to go. Importantly, these improvements do not help those already exposed.

This Nyrstar investment, supported by the SA government, includes a smelter refit with modern, clean technology and is expected to yield measurable benefits in health outcomes.

However, in the refit “transition” period since 2014, lead in air quality has got markedly worse, not better.