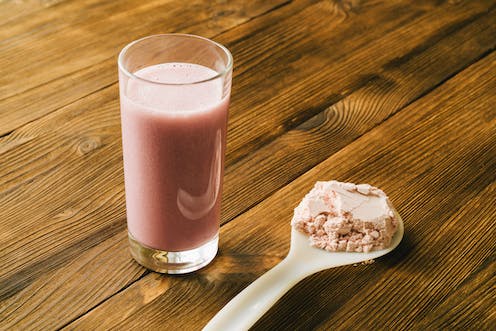 The trial includes meal replacements to enable obese teens who are enrolled to rapidly lose weight.progressman/Shutterstock

The Fast Track to Health study is a year-long dietary trial in adolescents with obesity. Since it started in Sydney and Melbourne at the end of 2018, it has been criticised for increasing the risk of eating disorders in people...

The Fast Track to Health study is a year-long dietary trial in adolescents with obesity. Since it started in Sydney and Melbourne at the end of 2018, it has been criticised for increasing the risk of eating disorders in people who may be especially vulnerable to these conditions.

Sydney-based clinical psychologist Louise Adams started up an online petition to stop the trial. She also complained to the ethics committee that approved the research.

Several Australian eating disorder organisations followed, raising concerns about the safety of the teens in the trial.

Fast Track’s investigators responded with a statement noting the health and mental well-being of participants was their first priority, and pledging to liaise with these groups to work through their concerns.

The Fast Track to Health trial is trying help Australian teenagers with obesity to lose weight, partly by going on a strict “intermittent fasting” diet for a year. Any weight loss could improve physical and mental health.

But the trial could also cause harm if the dietary restriction results in disordered eating behaviours or an eating disorder.

So the participants, researchers and others expressing concerns about the trial need to weigh up the potential benefits and risks.

What exactly does the Fast Track trial involve?

About 180 children aged 13 to 17 years and with a body mass index (BMI) that labels them with moderate or severe obesity follow one of two restrictive diets for a year.

The first diet is a type of intermittent fasting diet, called modified alternate-day fasting. This is where a very low-energy diet is followed for three days per week. On the remaining four days, a standard healthy diet is eaten.

On each of the three fasting days, about 2,500-3,000 kilojoules (600-700 calories) are consumed. This is about one-quarter of a child’s normal daily energy needs, although it aims to ensure their nutritional needs are being met. The calories are eaten or drunk in the form of three to four meal replacements (Optifast shakes, soups or bars) and then a small, low-carbohydrate meal.

The second diet is a reduced-calorie diet, which is low in energy with higher fibre foods. However, all children follow the alternate-day fasting diet for the first month.

Read more: How to manage weight issues with your teenager when you're not meant to talk about weight

The trial’s investigators include paediatricians, dietitians, and an eating disorder researcher. Each child has 10-13 appointments with trial staff over the year, with regular additional support via text message, email, phone and, optionally, Facebook.

Nearly one-quarter of children and adolescents are overweight or obese, conditions that increase the likelihood of developing a range of chronic diseases and early death.

Prevalence of overweight and obesity is higher in children in lower socioeconomic areas, including those around the Children’s Hospital at Westmead, where Sydney’s Fast Track research is taking place.

If a child lost weight during the trial, he or she would reduce the risk of being overweight or obese in adulthood, as well as lowering the current and future risk of chronic diseases such as heart disease and type 2 diabetes.

At a lower body weight, he or she may also experience less stigma and depression, and a higher health-related quality of life.

Overweight and obesity, and disordered eating behaviours and eating disorders, share factors that may increase the risk of any of them occurring. Dieting and body image dissatisfaction, for example, may be shared risk factors. 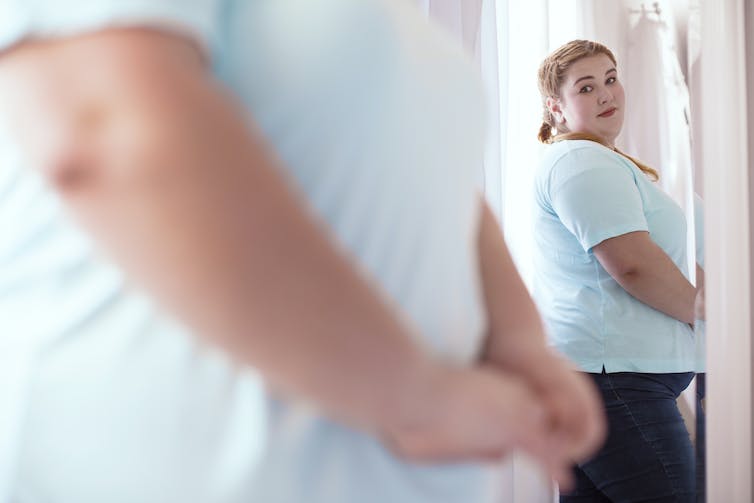 People with obesity may have some of the same risk factors as those with eating disorders, such as poor body image. Dmytro Zinkevych

It follows that a teenager who is overweight or obese may have disordered eating behaviours or an eating disorder. One US study found 40% of overweight adolescent girls and 20% of overweight boys binge ate.

Another study reported 6.3% of adolescents seeking treatment for overweight or obesity had a binge-eating disorder, 23.8% had recently binged, and 15% had lost control of their eating in the past.

The Fast Track website specifies that adolescents with significant medical or psychiatric illness or current treatment for a clinical eating disorder are not eligible to take part in the trial.

All adolescents in the study will experience the intermittent fasting diet; some for one month, some for one year.

The evidence on intermittent fasting for weight loss has only been collected among adults; professionals have advised against its use in adolescents.

In adults, intermittent fasting is usually found to be as effective for weight loss as other forms of dietary intervention, such as the continuous calorie restriction that occurs in the 11 months of the Fast Track reduced-calorie diet.

The Fast Track trial’s researchers agreed with Louise Adams that:

these risks can be justified by the likely benefits of the trial provided that the trial is adequately monitored with an appropriate risk management plan to minimise and communicate the risks associated with eating disorders.

Dieting is mostly reported to be a risk factor for eating disorders, but not always. The National Eating Disorders Collaboration states:

In one study of US adolescents, those who dieted were more likely to be overweight and to binge-eat and purge (such as by self-induced vomiting) after five years, compared with those who did not diet.

Dieting may result in food preoccupation, irritability and tiredness. However, most of the evidence on dieting is on self-directed dieting; which is is different to that done under medical supervision, such as in the Fast Track trial.

The implications of restrictive dieting after the end of the trial’s main intervention period of one year, however, may need more attention.

There are alternatives to the Fast Track trial for helping a teenager with obesity to lose weight that may not increase the risk of disordered eating or an eating disorder. Approaches include Health at Every Size, increasing self-compassion, and focusing more on promoting a healthy body image.

It’s important to focus on the psychological health of a teen with obesity, including body image, disordered eating behaviours and mood. If you are a teen with obesity or the parent of one, a good first step towards optimal health may be to find a clinician who adopts a Health at Every Size approach to nutrition and body weight.