When you deal with things at the quantum scale, where things are very small, the world is quite fuzzy and bizarre in comparison to our everyday experiences.

For example, we can’t ordinarily walk through solid walls. But at the quantum scale, when a particle encounters a seemingly insurmountable barrier, it can sometimes pass through to the other side – a process known as quantum tunnelling.

But how fast a particle could tunnel through a barrier was always a puzzle.

Read more: What do we mean by meaning? Science can help with that

In work published today in Nature we’ve solved part of the problem.

Why is that important? It’s a breakthrough that could have an impact on future technologies we see in our homes, at work or elsewhere.

Many of today’s technologies – such as semiconductors, the LED screen on your smart phone, or lasers – are based on our understanding of how things work in the quantum world.

Back to the tunnelling

For quantum particles, such as electrons, when we say they can tunnel through barriers, we don’t refer to a physical obstacles, but barriers of energy. 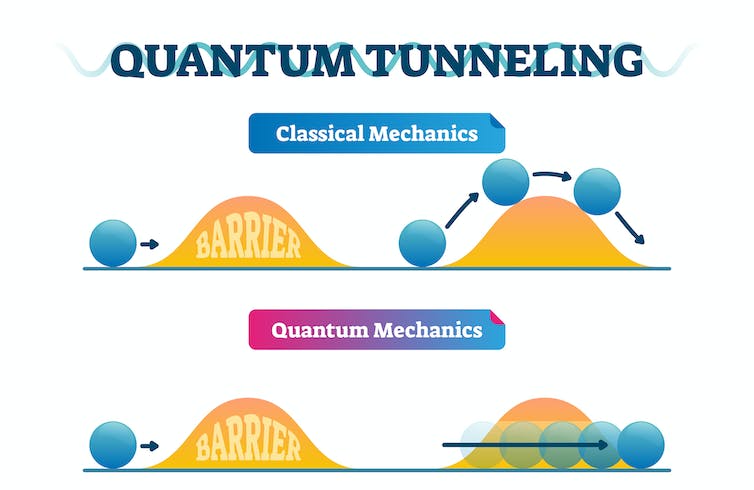 Tunnelling is possible due to the wave nature of the electron. Quantum mechanics assigns wave nature to every particle, and hence there is always a finite probability for the wave to propagate through barriers, just as sound travels through walls.

It may sound counterintuitive, but this is what is exploited in technologies such as scanning tunnelling microscopes, which allow scientists to create images with atomic resolution. This is also naturally observed in nuclear fusion, and in biological processes such as photosynthesis.

Although the phenomenon of quantum tunnelling is well studied and utilised, physicists still lacked a complete understanding of it, especially with regards to its dynamics.

If we could exploit the dynamics of tunnelling – for example, use it to carry more information – it could possibly give us a new handle on future quantum technologies.

The first step towards this goal is to measure the speed of the tunnelling process. This is no simple feat, as the time scales involved in the measurement are extremely small.

To put things in perspective, if an attosecond is stretched to a second, then a second equals the age of the universe.

The estimated times are so extremely small that they were previously treated as practically instantaneous. Hence for our experiment we needed a clock that can time these events with enormous accuracy and precision.

The technological advancements in ultrafast laser systems enabled us to implement such a clock at the Australian Attosecond Science Facility, Centre for Quantum Dynamics, at Griffith University. 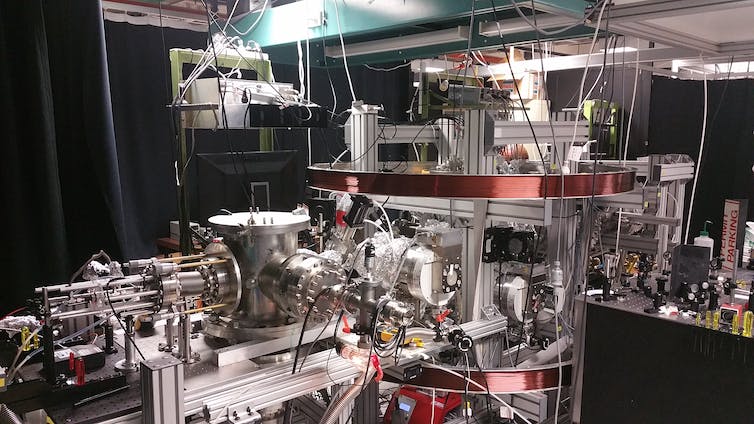 Part of the experiment set up at the Griffith University lab. U. Satya Sainadh, Author provided

The clock in the experiment is not mechanical or electrical – rather it is the rotating electric field vector of an ultrafast laser pulse.

Light is just electromagnetic radiation made of electric and magnetic fields varying at a rapid rate. We used this rapidly changing field to induce tunnelling in atomic hydrogen and also as a stopwatch to measure when it ends.

The choice of using atomic hydrogen (which is simply a bound pair of one electron and one proton) avoids the complications that arise from other atoms, making it easier to compare and interpret the results unambiguously.

The tunnelling time we measured was found to be no more than 1.8 attoseconds, much smaller than some theories had predicted. This measurement calls for a serious reconsideration of our understanding of tunnelling dynamics.

Various theories estimated a range of tunnelling times – from zero to hundreds of attoseconds – and there was no consensus among physicists on which single theoretical estimate was correct.

A basic reason for the disagreements lies in the very concept of time in quantum mechanics. Because of quantum uncertainties, there can be no absolute certainty in the time at which a particle enters into or emerges from the barrier.

But experiments like ours, using precise measurements on simple systems, could guide us in refining our understanding of such times

Quantum leaps in the technological world are often rooted in the quest for fundamental science.

Future quantum technologies that incorporates many of the quantum features – such as superposition and entanglement – will lead to what technologists call the “second quantum revolution”.

Read more: We've designed a 'flux capacitor', but it won't take us Back to the Future

By fully understanding the quantum dynamics of the simplest possible atomic tunnelling event – with a single proton and a single electron – we have shown that certain types of theories can be relied on to give the right answer, where other types of theories fail.

This gives us confidence about what theories to apply to other, more complicated systems.

Measurements at the attosecond scale not only add an extra dimension for the future quantum technologies but also can fundamentally help in understanding the elephant of the quantum room: what is time?

You might also like: In Trust Me, I’m An Expert: The explainer episode, Andrew White, a professor in physics at the University of Queensland, tells us how far quantum mechanics has come, why the research hit a wall, and what exciting breakthroughs might be just around the corner.