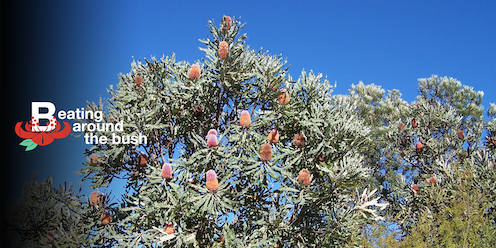 Firewood banksia is rugged and yet stunning. Short, stout and gnarled, it is often ignored by tree lovers. Indeed, it was commonly cut down and used as firewood in the...

Firewood banksia is rugged and yet stunning. Short, stout and gnarled, it is often ignored by tree lovers. Indeed, it was commonly cut down and used as firewood in the early days of the Swan River Colony in modern-day Western Australia.

However, the flower spikes are stunning – showy and vibrant, dark pink-red in colour that becomes mixed with yellow as they open – and set against a backdrop of elegant twisted grey-green leaves. Each spike is composed of up to 6,000 individual flowers, and yet only a few become filled with seeds.

The “cones” (these are not true cones like pine cones) are magnificent too – velvety chocolate brown, impressive in their woodiness, and expressive as the mouth-like follicles open to release their seeds. Symmetrical by turn and then messy by another turn, no other banksia species looks quite like it. 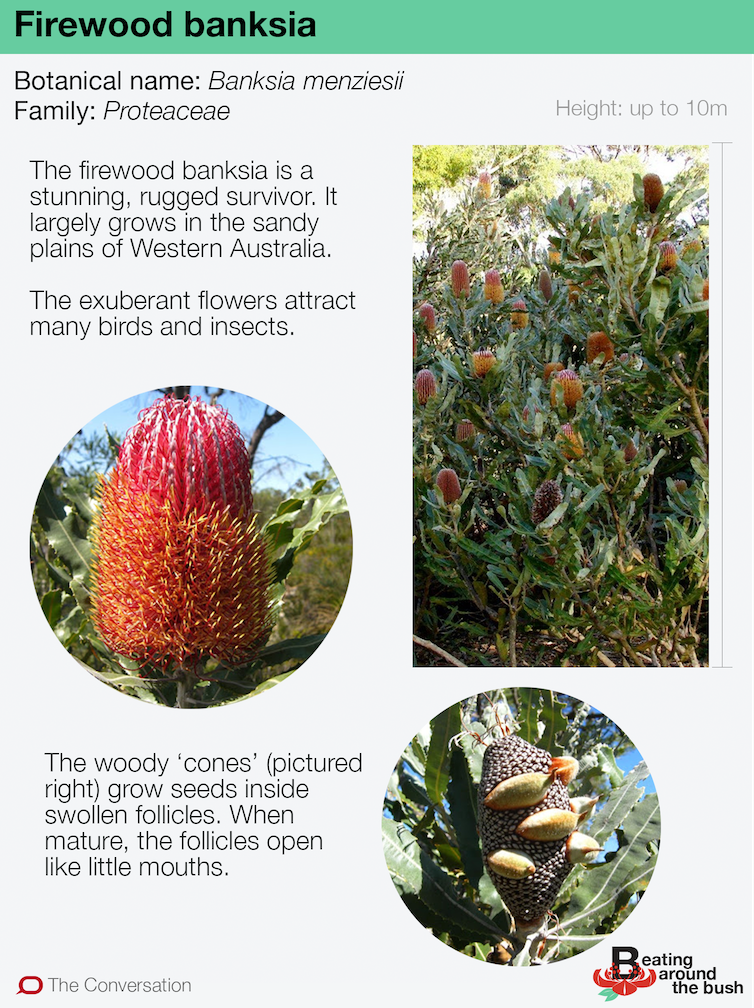 The Conversation We admire firewood banksia for functional reasons too. Life on Western Australia’s sandplains is tough, especially in the heat of the summer. One of us (Lauren) knows this all too well, having spent hours on her hands and knees counting banksia seedlings for her PhD research. Large seeds provide the seedlings with resources to grow exceptionally long roots to reach water deep in the sandy, nutrient-poor soils. It’s an adventure race for survival because roots need to tap the ground water before the arrival of the long, hot Perth summer. Seedlings of a neighbouring banksia species, the slender banksia, can grow roots at a rate of up to 3.5cm per day! 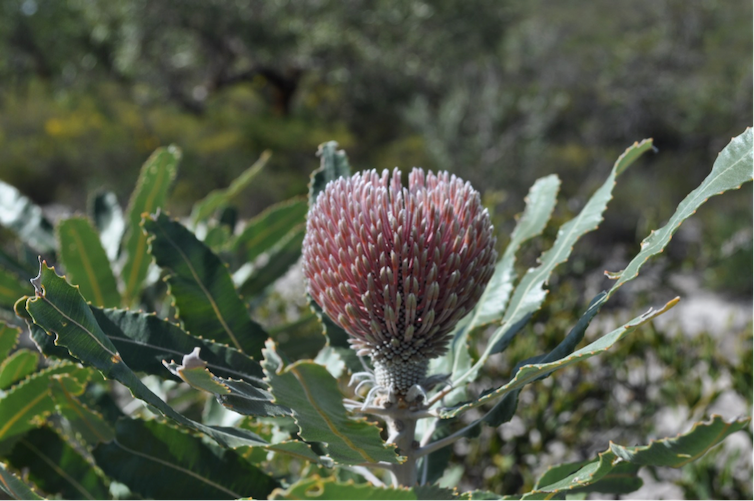 The flower spikes begin as a dark pink-red and become red-yellow as they mature. Photo by Lauren Svejcar Uniquely Aussie Banksia is a plant genus unique to Australia, named after the great botanical explorer Sir Joseph Banks. Banks travelled on the HMS Endeavour with James Cook on his first great voyage to the “unknown southern land”. The specimens Banks and his team collected formed the first scientific collections of Australian flora, now held at the Natural History Museum in London and the Royal Botanic Gardens in Sydney. According to fossil records of pollen, leaves and cones, banksia species have grown in Australia for at least 60 million years making their lineage one of the oldest in Australia. Banksia have persisted through major climate shifts from wet to dry climates that occurred about 25 million years ago. Even the first banksia species were able to survive recurrent wildfire, owing to what botanist Alex George refers to as the “ruggedness” of their features. Banksia epitomise what it means to be Australian. 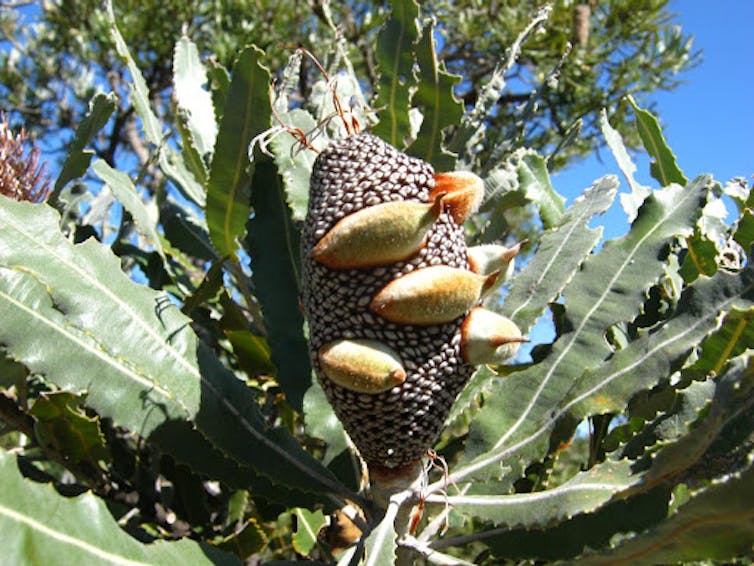 A woody ‘cone’ (infructescence) with seeds maturing inside swollen follicles. It is cheap for plants to produce wood in Australia because there’s plenty of sunlight, so why not offer your seeds total protection? Photo Lauren Svejcar. Some 20 years after Cook’s first voyage of the east coast came the discovery of the rich banksia flora on the south-west coast of Australia. Banksia grow in non-arid regions all over Australia, but most species grow only in Western Australia. Surgeon-naturalist Archibald Menzies was the first explorer to see and sample the diversity of banksia species growing in the south-west near Albany. Our favourite banksia, the firewood banksia is named in his honour: Banksia menziesii. Facing danger While their experience of historic climate change and ruggedness may protect firewood banksia from Perth’s drying climate, ongoing habitat clearing makes them vulnerable to decline and has contributed to the banksia woodlands of the Swan Coastal Plain being listed as an endangered ecological community. One of us (Rachel) played in banksia woodlands as a child, climbing the gnarly trucks of firewood banksia and collecting spent cones. Long before that, the Whadjuk Noongar collected flower spikes to make bush medicine. Having nature nearby is so important for people and for conservation. It is overwhelmingly sad that future generations of Perth may not be afforded this unique opportunity. Read more: The mysterious Pilostyles is a plant within a plant Birds and insects love firewood banksia too. Birds are the primary pollinators of firewood banksia, no doubt attracted to the beautiful pollen-rich flowers. Interestingly, insects visit flowers more often than birds, but they are less effective pollinators. 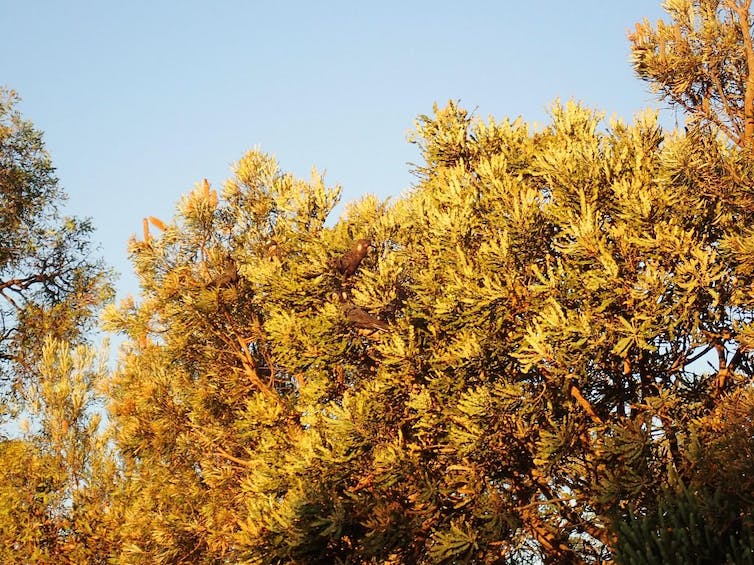 Carnaby’s cockatoos feeding on firewood banksia. Photo by Lauren Svejcar The seeds are an important food source for the critically endangered Carnaby’s cockatoo. Hungry cockatoos often visit the firewood banksias that grow on our university campus in Perth’s southern suburbs. We count our lucky stars we get to watch while they squawk and feast, leaving when their tummies are so full that take-off is comical and there’s a mess of woody litter under the trees. It’s a blissful moment before the snarl of commuting traffic or the pull of work, connecting us to nature and to things bigger than ourselves.