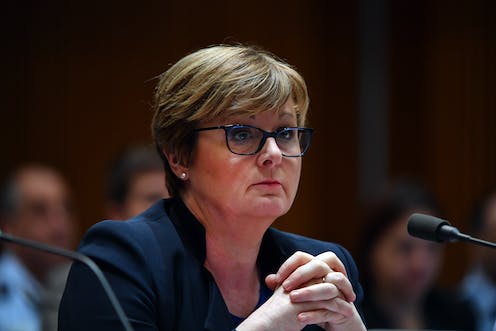 With the resignations of the two ministers now formally confirmed, Scott Morrison has announced that Western Australian senator Linda Reynolds will become Minister for Defence Industry, with Ciobo stepping down at once from that position.

If the government is re-elected Reynolds, who has a background in the Army Reserve, will be the new defence minister. Pyne will remain in the defence job until the election.

Reynolds will be immediately elevated to cabinet, bringing the number of women in cabinet to seven.

Her pre-election promotion has an eye to the government’s so-called “women problem” - much negative attention has been focussed on the low level of female representation in its parliamentary ranks.

Currently an assistant minister, Reynolds will retain her responsibility for emergency management. In this role, she has been at Morrison’s side on his visits to the flood areas.

Morrison said in a statement: “When you can call up a brigadier, in the form of Linda Reynolds, to take on the role of defence minister, it shows we have a lot of talent on our bench to draw from”.

He said it was Pyne’s responsibility to continue to manage strategic issues through the election period. “This will ensure a consistency in our approach and the opportunity for a seamless handover to minister Reynolds, should we be successful at the election.

"As a cabinet minister in the defence portfolio minster Reynolds will also have a unique opportunity to transfer into the role in the event the government is re-elected”.

He said the appointment of Reynolds would bring the number of women in cabinet to the highest of any cabinet since federation.

In a 29-year Army Reserve career, Reynolds served in many part and full-time positions. Attaining the rank of brigadier in 2012, she became the first woman in the Australian Army reserves to be promoted to a star rank.

Reynolds said: “My background has prepared me well for this new role”.