Thanks for asking your fantastic question.

I’ll bet you’ve looked up at the night sky and seen lots of stars. They are beautiful aren’t they? Each star is a huge glowing ball of gas, just like the Sun. Stars look much smaller and fainter than our Sun because they are very far away.

Despite their name, shooting stars are not stars at all. They are tiny space adventurers who accidentally wander into our sky and get sucked toward us by the Earth’s gravity.

Let’s look at the journey of one of these adventurers. I’ll call her Gemma.

Once upon a time there was a tiny speck of dust — space dust — called Gemma. For many years she had spent her time wandering carefree through space and dancing around the planets and the stars.

One day, Gemma noticed a light in the distance. “What’s that?”, she wondered to herself. As she got closer, she saw a beautiful vision of a blue planet, hanging in space like a marble, covered with swirling colours of blue and white. “Wow! That’s the planet Earth,” she said to herself. “Just like I have read about in my books!” (In this story, specks of space dust read books just like you and me). 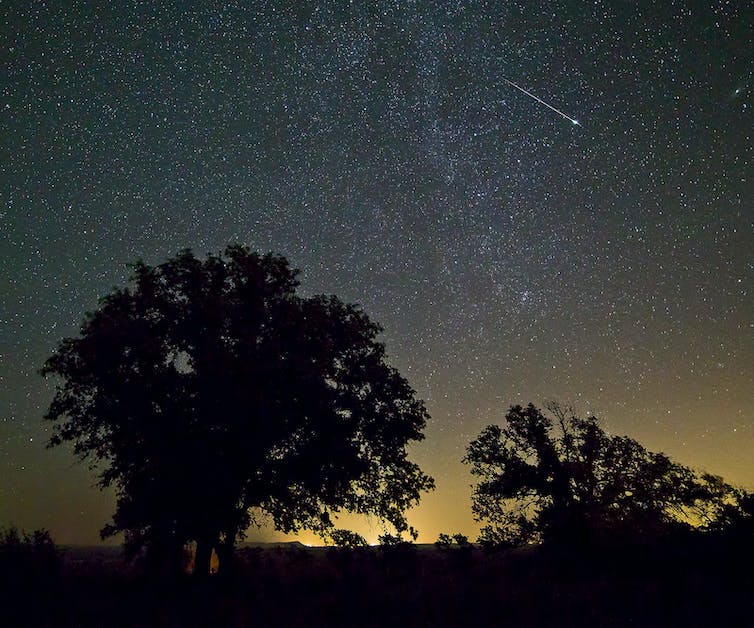 Gemma, is that you? Ralph Arvesen/Flickr, CC BY

After spending so long floating through the darkness of space, Gemma felt a strange attraction towards this beautiful new distraction.

It wasn’t just the fascination of Earth. It felt like an invisible force was bringing her slowly closer and closer to this bright globe of light.

As Gemma flew closer, she realised that she was being pulled towards the Earth by the force of gravity. “I’ve read about this in my books,” she thought, remembering that gravity is the same force that keeps humans standing on the Earth instead of floating away. The bigger the planet, the stronger its gravity.

As she neared the planet, Gemma could now see the outline of the oceans and the clouds and the sun glinting off the sparkling water.

Suddenly, she noticed the blackness of space was turning into a beautiful blue sky. She had entered the atmosphere of Earth! She had read that the atmosphere was a thick blanket of air, more than 100 kilometres thick that wraps around the surface of our planet and allows all the animals and people to breathe.

As she encountered the air, Gemma felt the chill of deep space subside. She started to feel as warm as a summer’s day. As she jostled and bounced through the air like an aeroplane, she started to glow with an energy and light that she had not felt before. “This must be friction, making me warm — just like the friction when I rub my hands together!” she thought to herself. A lot of friction can make things glow, and Gemma started to glow brighter and brighter.

As her speed increased, Gemma felt like she was on a roller coaster. “Wheeeeeeee!!” she called out with excitement, as she rocketed towards the blue planet, shining like a beautiful, bright star.

All the children on Earth looked up and were very excited to see Gemma, the shooting star from outer space, racing down to join them on Earth. She was just as excited to see them, and to have new friends on this beautiful planet Earth.

Next time you see a shooting star, say hello to Gemma!

How the Buddha became a Christian saint

Did ancient Americans settle in Polynesia? The evidence doesn't stack up