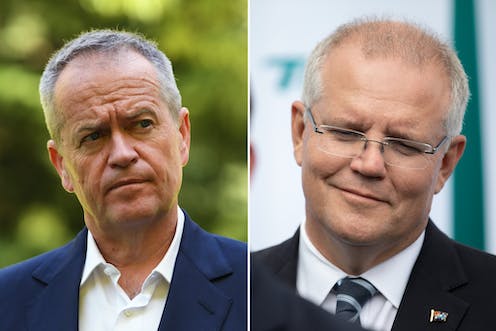 The latest Ipsos poll has the gap between Labor and the Coalition narrowing to 51-49, but it may be an outlier.AAP/James Ross/Grant Wells

An Ipsos poll conducted for Nine newspapers – previously Fairfax papers – gave Labor just a 51-49 lead, a three-point gain for the Coalition since the last Ipsos poll in mid-December. Primary votes...

An Ipsos poll conducted for Nine newspapers – previously Fairfax papers – gave Labor just a 51-49 lead, a three-point gain for the Coalition since the last Ipsos poll in mid-December. Primary votes were 38% Coalition (up two), 33% Labor (down four), 13% Greens (steady) and 16% for all Others (up two). The poll was conducted February 12-15 from a sample of 1,200.

This is the narrowest lead for Labor in any national poll since Scott Morrison replaced Malcolm Turnbull. The movement towards the Coalition will be attributed to Labor’s support for the Medevac bill, which saw the Coalition defeated in the House of Representatives on February 12.

Ipsos has a reputation for being volatile, and it always has the Greens too high. Both the volatility and the high Greens vote may be explained by Ipsos being the only live phone pollster in Australia – Newspoll, Essential and ReachTEL use either robopolling, online methods or a combination.

49% approved of Morrison’s performance (up two), and 40% disapproved (up one), for a net approval of +9. Bill Shorten’s net approval was down three points to -12. Morrison led Shorten by 48-38 as better PM (46-37 in December). Ipsos gives incumbent PMs far better ratings than Newspoll.

Labor’s Chris Bowen was preferred as Treasurer over incumbent Josh Frydenberg by a narrow 31-30 margin – a strong result for Bowen on an issue that is usually perceived to favour the Coalition. Voters trusted Labor by a 49-34 margin over the Liberals to respond to the banking royal commission. Labor’s proposal to abolish franking credit cash refunds was opposed by 43-40; last week’s Newspoll had opposition at 44-35.

While the Medevac bill could have assisted the Coalition, a Queensland YouGov Galaxy poll, conducted February 13-14 – at about the same time as Ipsos – gave federal Labor a 52-48 lead.

At the 2016 election, the Coalition’s Queensland two party vote was 3.7% higher than its national vote, and in 2013 the difference was 3.5%. Even in 2007, when Queenslander Kevin Rudd was very popular, the Coalition still performed 2.3% better in Queensland than nationally.

If the Queensland Galaxy result is correct, Labor is very likely ahead nationally by at least 55-45, in contrast to Ipsos. YouGov Galaxy is the pollster that conducts Newspoll.

While the Queensland Galaxy suggests that Ipsos is an outlier, we cannot know until we get more polls. Next Sunday night’s Newspoll release will be keenly anticipated.

The Coalition holds eight Queensland seats by margins of 4% or less. This poll implies a 6% swing to Labor in Queensland since the 2016 election.

The Coalition led Labor by 44-29 on best plan for border security and asylum seekers. This question did not ask about the medevac bill. It is a general question on an issue where the Coalition is perceived to have an advantage.

48% approved of Premier Annastacia Palaszczuk’s performance (steady) and 38% disapproved (up one), for a net approval of +10. Opposition Leader Deb Frecklington’s net approval fell ten points to -4. Palasczuk had a 47-27 lead as better Premier (43-26 in November).

At the November 2017 Queensland election, One Nation contested 61 of the 93 seats and won 13.7% of the statewide vote – their vote would probably have been about 18% had they contested every seat.

Read more: Labor wins a majority in Queensland as polling in Victoria shows a tie

In both the state and federal polls, One Nation is down to 8% in Queensland. I believe One Nation has been identified as a right-wing party, not a populist party. Under Turnbull, there was space to the Coalition’s right, but with Morrison that space has been reduced.

Last week’s national Essential poll, conducted February 6-11 from a sample of 1,067, gave Labor a 55-45 lead, a three-point gain for Labor since Essential’s late January poll. Primary votes were 38% Labor (up two), 34% Coalition (down four), 10% Greens (steady), 7% One Nation (steady) and 11% for all Others (up two). This poll was taken before the medevac bill passed the House.

28% thought the banking royal commission would lead to significant changes in the way banks operate, 47% thought it would lead to minor changes and 25% no real difference.

Showing disillusion with both sides of politics, 27% trusted Labor to implement the royal commission’s recommendations, 23% the Liberals and 35% thought there was no difference, with another 15% undecided.

By 59-11, voters agreed that Morrison should not end parliament before it deals with the royal commission’s recommendations. By 55-15, they agreed that the banks have more power than politicians, and will find a way to block meaningful reform.

In additional questions from last week’s Newspoll, Morrison led Shorten by 48-33 on more capable of handling the economy (50-32 in October). In general, incumbents benefit from this type of question, and the economy is perceived as a strength for the Coalition. The 15-point gap is narrower than any Turnbull lead over Shorten on this question in the six times it was polled while Turnbull was PM.

33% thought the government should prioritise increased funding of government services, 30% paying down government debt and 27% cuts to personal income tax.

The Westpac February consumer confidence rebounded to 103.8, up from 99.6 in January - the first month since late 2017 the index had fallen below 100. While Australian economic data for December has been weak, stocks have continued to rise.

The New South Wales election will be held on March 23. An Essential poll, conducted February 6-11 from a small sample of 544, gave Labor a 51-49 lead. Primary votes were 39% Coalition, 36% Labor, 9% Greens and 8% One Nation. Premier Gladys Berejiklian had a 35% positive rating, 25% negative. Opposition Leader Michael Daley had a 27% positive rating, 20% negative.