It’s worth tolerating the mosquitoes and the disconcerting rustle of unseen creatures that populate forests after dark, for the chance to encounter the eerie pale green glow of a less-known inhabitant.

Australia is a land of extremes, of curious organisms with quirky adaptations. Even our ghosts are more perplexing than your regular spook, and you don’t need a Geiger counter or infrared camera to track them down. Ghosts feature fantastically in folklore across the globe, but Australia’s ghost collective has a special fungal addition. Stealing the limelight, or rather the twilight, is the ghost fungus, Omphalotus nidiformis.

Ghost fungi are large, common and conspicuous, yet they manage to escape the gaze of most. As interest in fungi grows in Australia, the ghost fungi is getting a curious new look-in. 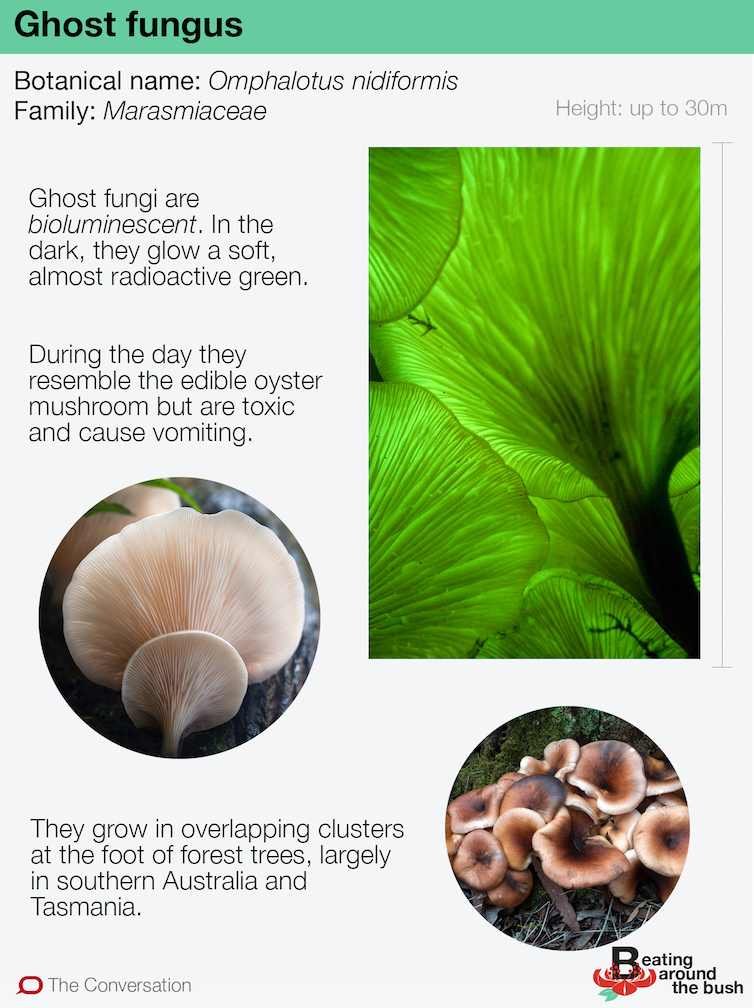 The Conversation Fungi are well known for their perplexing traits and peculiar forms. One of the more mesmerising – and other-worldly – traits is luminosity. A conspicuous quirk, luminosity has been recognised for a good while. Aristotle (384–322 BC) was among the first to have reported terrestrial bioluminescence (bios meaning living and lumen meaning light) in the phenomenon of “glowing wood” or “shining wood” –luminescent mycelia in decomposing wood. However, well before Aristotle’s time, Aboriginal Australians knew about the luminescence of fungi. Early settlers in Australia recorded the reactions of different Aboriginal groups to what we think was the ghost fungus. Some, such as the Kombumerri of southeastern Queensland, associated luminous fungi with evil spirits and supernatural activities of Dreamtime ancestors. West Australian Aboriginal people referred to the ghost fungus as Chinga, meaning spirit. 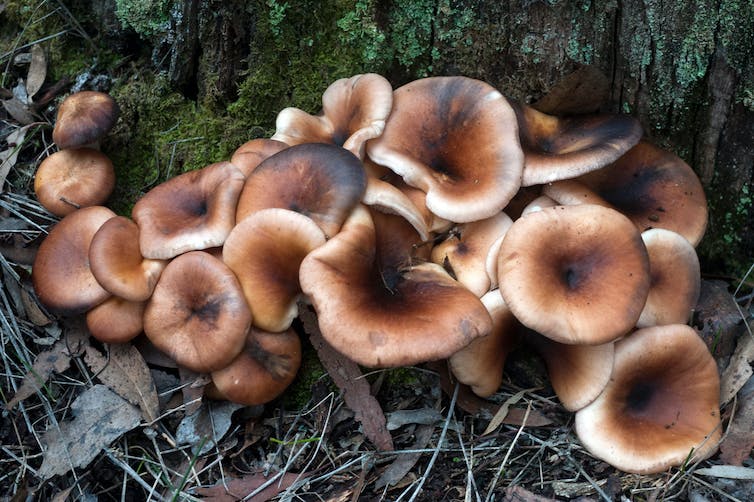 Ghost fungi often grow en masse in large overlapping clusters around the bases of both living and dead trees. Author provided Similarly in Micronesia, some people destroyed luminous fungi believing them to be an evil omen, while others used them in body decoration, especially for intimidating enemies. In California, miners believed them to mark the spot where a miner had died. This seemingly inexplicable glowing trait gave rise to rich and colourful folk histories. Lighting up the night The ghost fungus contains a light-emitting substance called luciferin (lucifer meaning light-bringing). In the presence of oxygen, luciferin is oxidised by an enzyme called luciferase. As a result of this chemical reaction, energy is released as a greenish light. The light from the ghost fungus is often subtle and usually requires quite dark conditions to see. To experience ghost fungi at their most spectacular you need to allow your eyes time to adjust to the darkness, and don’t use a torch. Ghost fungi have been widely recorded across Australia, especially in the forests of the south-eastern seaboard. They often appear in large overlapping clusters around the bases of a variety of trees, commonly Eucalyptus, but also Acacia, Hakea, Melaleuca, Casuarina and other tree genera as well as understorey species. The large funnel-shaped mushrooms (the reproductive part of the fungus) are variable in form and colour, but are mostly white to cream coloured with various shades of brown, yellow, green, grey, purple and black, usually around the centre of the cap. On the underside, the lamellae (radiating plates that contain the spores) are white to cream coloured and extend down the stipe (stem). This adaptable fungus obtains its tucker as both a weak parasite of some tree species and as a saprobe, which means it gets nutrition from breaking down organic matter such as wood. 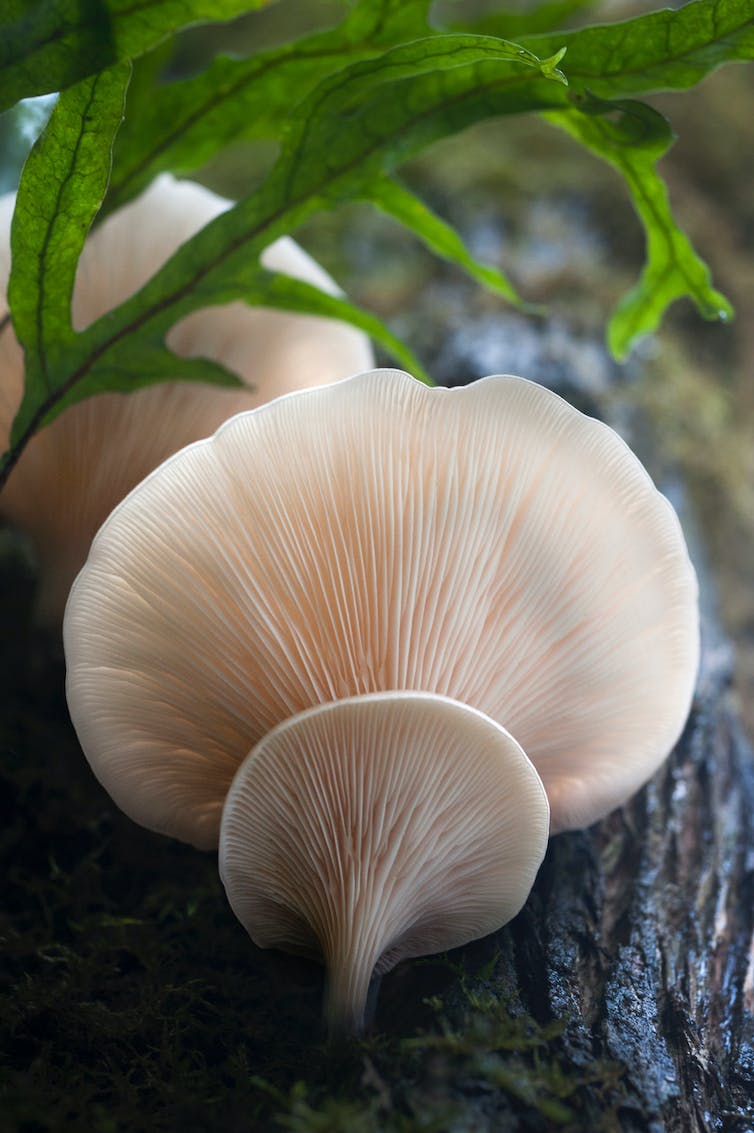 Young ghost fungi can appear remarkably similar to edible oyster (Pleurotus) mushrooms, but be warned, ghost fungi are toxic. Author provided Although fungal bioluminescence has been well documented, little research has been done to establish why fungi go to the trouble of glowing. While some experiments have shown that bioluminescence attracts spore-dispersing insects to particular fungi, this appears not to be the case with the ghost fungus. Researchers who tested whether insects are more readily attracted to the ghost fungus concluded that bioluminescence is more likely to be an incidental by-product of metabolism, rather than conferring any selective advantage. Those who find this scientific explanation rather unimaginative might prefer to stick with the theory that these fungi help guide fairies (or perhaps a bilby or bandicoot) through the darkened forest. If you stumble across ghost fungi in daylight, however, they look far less puzzling. It does bear a superficial resemblance to the delicious oyster mushroom (and were once classified in the same genus), but unfortunately they are toxic. Ghost fungi possess a powerful emetic that causes nausea and vomiting. (And who knows, it might even cause you to glow terrifyingly green…) Returning to darkness We live in the Age of Illumination, plagued by light pollution. Earth’s nights are getting brighter and many scientists are concerned about the effects on wildlife as well as how they stymie human appreciation of nature. Artificial lights disorient birds, especially those that migrate at night and other species such as hatching turtles that confuse artificial light with that of the moon. Exposure to artificial light also affects human health. A nighttime wander through the forest reveals its nocturnal inhabitants and may reward one with the pleasures of finding ghost fungi. Only in darkness is their magic revealed. Alison Pouliot will be launching her book on Australian fungi, The Allure of Fungi, in Melbourne, Daylesford, Apollo Bay and Shellharbour. For more details on these events go here.