Recently, the Australian Association for the Teaching of English (AATE) — the peak professional body for Australian English teachers — published a special issue of the journal English in Australia entitled “Love in English.” It addressed the continued marginalisation of some genders and sexualities within the classroom.

One article in this journal analysed sample text lists provided by the Australian Curriculum, Assessment and Reporting Authority (ACARA). The article found only two of the 21 fiction texts portrayed non-heterosexual protagonists, named characters, experiences, or relationships. Before you go imagining radical queer literature stealthily making its way into the secondary classroom, the texts in question were Twelfth Night and The Great Gatsby.

An extensive amount of educational research has demonstrated schools are enjoyable and productive places for some students, but not others. As much as we would like to think otherwise, it’s clear schools do not serve all members of the population equally well.

Schools are sites of learning about social, cultural, political and economic positions, rights and possibilities. Schools can either double-down on social inequalities or they can help change attitudes.

The queer experience at school

Additionally, 45% of participants had witnessed physical harassment of classmates who were perceived as being sexually and/or gender diverse. 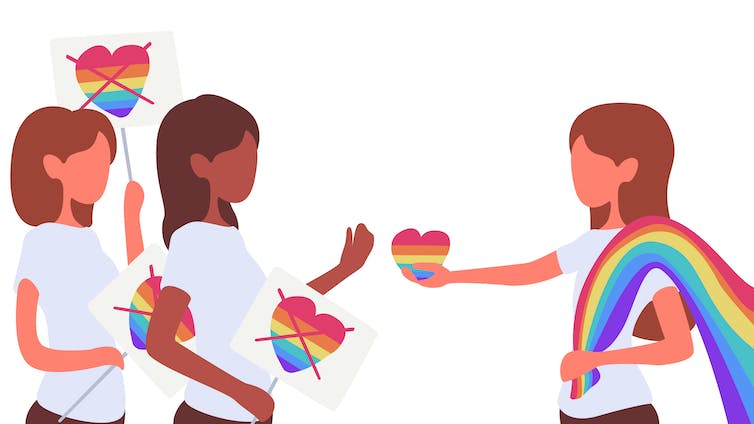 Including queer texts in the curriculum could help change negative attitudes towards people who identify as LGBTQI+. from www.shutterstock.com

These findings are consistent with other research that indicates homophobic violence is increasing in Australian schools. The Writing Themselves In report indicated that in 1998, 69% of sexually or gender diverse young people reported homophobic violence. In 2004, this figure rose to 74%, and by 2010 it was 80%.

Being provided with a safe learning environment is not the only thing queer young people are being denied. They’re also being denied the opportunity to learn about the histories and experience of people like themselves.

As researchers at Sydney and Western Sydney University have noted:

Discrimination can be perpetuated by what is present — and what is noticeably absent — in the curriculum.

Queer inclusions in curricula have the potential to make a meaningful difference to schooling environments, especially in understanding and confronting inequalities. The entire national English curriculum identifies teaching young Australians to contribute to “a democratic, equitable and just society that is prosperous, cohesive and culturally diverse” as its core purpose.

In addition to this admirable aim, the Australian Curriculum’s General Capabilities and Cross-Curriculum Priorities emphasise developing respect, reciprocity, empathy and open-mindedness. While all of these things might be assisted by the expansion of the Australian English curriculum to include more explicit representations of LGBTIQ+ lives, it ain’t necessarily so. That’s where teachers come in.

Even when the texts are mainstream, they can still be alternative, as Eve Kosofsky Sedgwick has influentially argued. Think about the queer subtexts of Euripides. Think Virgil. Think Plato and Socrates.

How about all the LGBTIQ+ discussions of Marlowe, Spenser, Milton or Shakespeare? Or Dickens, Dickinson, James, Melville, Proust, Wilde, Woolf? One of the most powerful things about mainstream literature is its capacity to undo itself.

Queer youth are more than an ‘at risk’ group

One reason to include books with transparently queer characters in the recommended reading for secondary students is it allows students to push back against the assumption queer youth are inherently “at risk.”

There is clear and overwhelming evidence that the well-being, mental health and educational achievement of LGBTIQ+ young people is often poorer than their cisgender and heterosexual peers. 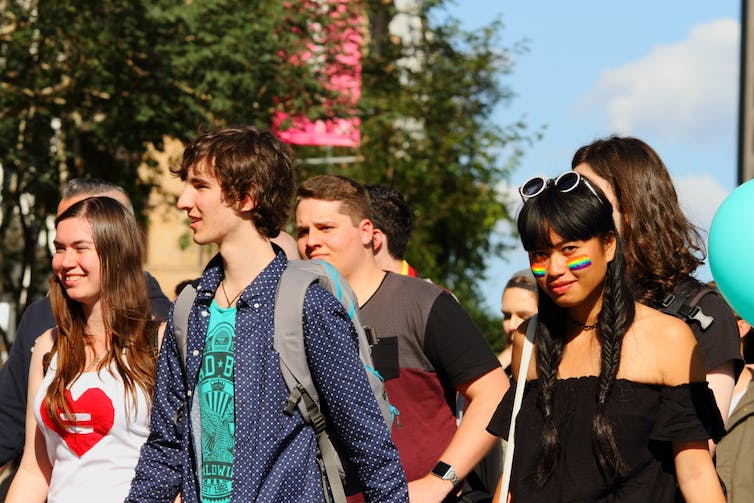 But it’s important to acknowledge the resilience, strength and joy of queer students too. Queer kids and the people who love them need to know they can survive and thrive while we wait for the ideal of an inclusive Australia to arrive.

Simply setting texts that present diversity doesn’t mean teachers will support their messages, that students won’t resist and reject them, or that the books won’t perpetuate negative attitudes towards queer people. Diversity can no more be guaranteed than love. Not even the love of books.

Perhaps a more useful way to approach this issue would be to ask students themselves what they want to read and why. At the University of Sydney, we’re working with young people and other marginalised communities to understand what they’re interested in and what they think would benefit them.

We could rely on our expertise and suggest any number of compelling literary texts that might be included in the Australian English curriculum: Christos Tsiolkas’s Barracuda, Audre Lorde’s Zami: A New Spelling of My Name, Jordi Rosenberg’s Confessions of the Fox, Peter Polites’ Down the Hume or Patricia Highsmith’s The Price of Salt, to name just a few.

But, rather than continuing to make decisions on behalf of youth, we are determined to open more channels for them to tell us about their wants and needs in education, and more broadly. Young people are often a topic of discussion. It’s time for them to be included in discussions, and discussion around the school curriculum should not be an exception.

What might a crowdsourced queer-friendly English curriculum look like in Australia? Please contribute in the comments below this article.

Authors: Annamarie Jagose, Dean of the Faculty of Arts and Social Sciences, University of Sydney