It is fitting that Scott Morrison represents the federal division of Cook, named after British explorer James Cook. First as treasurer, and now as prime minister, Morrison is committed to a A$50 million plan to celebrate the upcoming 250th anniversary of Cook’s landing at Kurnell on April 29, 1770. He has announced A$6.7million for a replica of the Endeavour to circumnavigate the country (something Cook himself never did).

Cook and his treatment by public memory can be seen as the latest front in an ongoing culture war. It is a debate centred on how Australian history – especially its colonial history – should be understood. Which voices and stories should be included, and excluded, from the dominant narrative?

Morrison frames this is as an extension of the campaigns to change January 26 as Australia Day. In 2018, he lambasted the “indulgent self-loathing” of those who wanted to change the date. He tweeted – incorrectly – that “Our modern Aus nation began on January 26, 1788”. This predates the flag, Constitution, five out of six states, and even the word “Australia”.

But this was never about historical accuracy. Deputy Nationals leader Bridget McKenzie claimed – also wrongly – that January 26, 1788, was “when Captain Cook stepped ashore”. He actually died in 1779. But nevertheless, as the man who claimed Australia for Britain, Cook has become a symbol of settler-colonialism with his legacy intertwined with Australia Day.

Morrison is determined that 2020 be a year of government-led celebration of Cook’s exploits. The justification for the anniversary spend is as much ideological as historical. Morrison claimed:

he gets a bit of a bad show from some of those who like to sort of talk down our history. 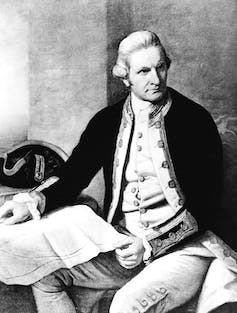 Explorer James Cook has come to symbolise Australia’s divided view of its history and how it should be celebrated. Shutterstock

The use of public money to cast Cook in a positive light is a continuation of the “history wars” that flared up during the prime ministership of John Howard. He rejected the “black armband” view that saw Australian history as a “disgraceful story”. On balance, Howard insisted, it was one of “heroic achievement”.

For Morrison, Cook is the embodiment of a colonial hero whose reputation has been tarnished by left-wing “activists”. He laments that “it’s very trendy to talk down James Cook and all that sort of stuff”.

Presumably “all that sort of stuff” is a gentle euphemism for dispossession and the destruction of Indigenous cultures.

Debate over Cook’s legacy briefly raged in 2017. Indigenous journalist Stan Grant questioned the plaudit, “discovered this territory 1770”, etched in stone at Cook’s statue in Sydney’s Hyde Park. Soon after, “change the date” was spray-painted on the base.

The then prime minister, Malcolm Turnbull, insisted Grant was “dead wrong”. Using rhetoric that bordered on the ridiculous, Turnbull took to Facebook to describe the graffiti as part of a “totalitarian campaign”. He also dismissed calls to change the date of Australia Day, condemning the “Stalinist exercise of trying to wipe out or obliterate or blank out parts of our history”.

The Morrison government’s decision to punish councils that do not acknowledge January 26, to introduce dress codes at citizenship ceremonies, to refuse to discuss the date of Australia Day, and to spend millions on Cook’s 250th anniversary, all stem from the same culture war.

The Liberal Party’s Twitter page claims it is trying to “protect Australia Day from activists”. But the heavy-handed attempts to cast Cook as some high priest in the church of Australian nationalism stifles debate and skews history. Increasing social unease with traditional colonial narratives is not based on a desire to deny history, but to expand it and to include the perspective of First Nations.

As historian Mark McKenna notes, the communities in Kurnell and Cooktown have worked hard to connect with Indigenous leaders and find new ways to commemorate Cook’s voyage. But crucially, this requires a willingness to accepts history’s nuances and diversity. It requires moving beyond the false dichotomy of utter shame or complete pride in Australia’s history.

Few would dispute that Cook was a brilliant navigator and explorer. But there is also a question of balance. The Captain Cook Society notes that he is commemorated by more than 100 memorials, many in Australia. It is hardly a “Stalinist exercise” to suggest that Cook is already well honoured and that a more worthy project might be a new Indigenous museum.

The original lyrics to Advance Australian Fair boasted that when “gallant Cook from Albion sailed … true British courage bore him on”. Veneration of Cook has been historically tied to British patriotism. As the Sydney Morning Herald noted in 1929, Australia’s great patriotic moments for “all who share British blood” occur in April. It included in this, Cook’s landing, the landing at Gallipoli, St George’s Day, and the birth of Shakespeare.

Our nation has changed.

Cook is no longer the national hero he once was, for the simple reason that Australians no longer see themselves as British, sharing in British achievements. More importantly, since W.E.H. Stanner’s call to end the “great Australian silence” in 1968, Australians have become more aware of the ancient cultures that possessed this land at least as far back as the Pleistocene. Retreating into the lazy “cult of forgetfulness” with a government-promoted, triumphant Cook narrative, narrows a history that has been slowly broadening for decades.

The anniversary in 2020 of Cook’s voyage can and should be marked. But without genuine consultation with First Nations peoples to find a form and language that offers respect, it will be another exercise in exclusion. If the memorials and events suggest, in former prime minster Tony Abbott’s words, that before the British arrived Australia was “barely settled”, we will know we have failed yet again.