If you bumped into a Homo erectus in the street you might not recognise them as being very different from you. You’d see a certain “human-ness” in the stance, and his or her size and shape might be similar to yours.

But their face would be flatter, with a more obvious brow. And having a conversation would be hard – his or her language skills would be poor (although they could certainly craft a stone tool or light a fire).

Of course this is entirely hypothetical, as Homo erectus is now extinct. This enigmatic human ancestor probably evolved in Africa more than 2 million years ago, although the timing of their disappearance is less clear.

Homo erectus was in the news over 2018 thanks to new discoveries in the Philippines and China, which have transformed our understanding of this not too distant family member.

So who was Homo erectus? And could 2019 be the year we learn more about our mysterious ancestor? 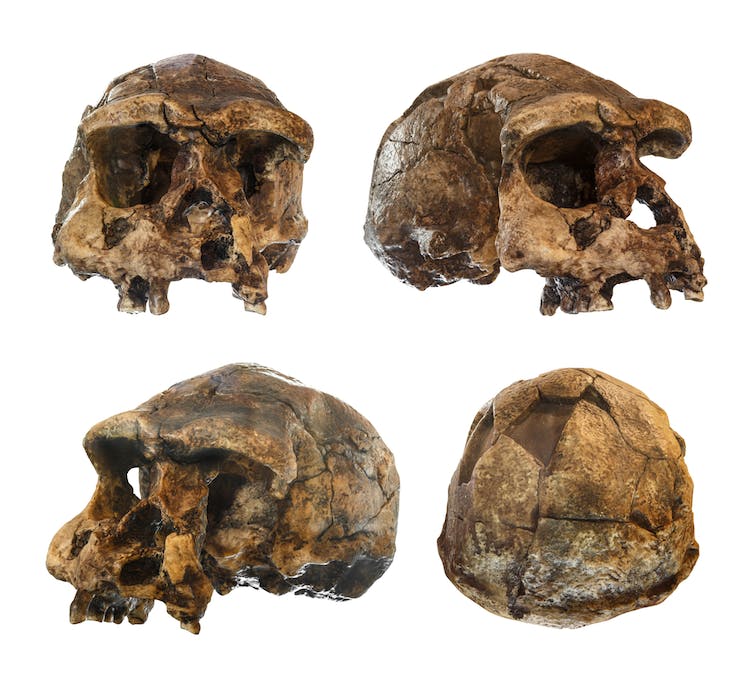 Homo erectus skull discovered in 1969 in Sangiran, Indonesia. from www.shutterstock.com

Where and when did they live?

Homo erectus was first discovered in Java, Indonesia and then China – these are the famous “Java Man” and “Peking Man” fossils. Eugène Dubois’ 1891 discovery on Java (originally called Pithecanthropus erectus) was a key piece of evidence in supporting Darwin’s ideas of human evolution.

The recent discovery of stone artefacts in the Loess Plateau of China suggests that a hominin, probably Homo erectus, was living in the region by 2.1 million years ago. This evidence pushes back their presence in Asia back by at least 400,000 years.

Other ancient Homo erectus sites are present in the Caucasus region of Georgia (1.8 million years ago), on Java and in Africa.

Homo erectus is thought to have become mostly extinct following the emergence of modern humans – yet some specimens from Java have been dated (with some controversy) to as recently as 40,000 years ago. If this dating is correct, it suggests that they coexisted with Homo sapiens, although probably only in very small pockets in Indonesia.

The expansion of Homo erectus throughout the globe was the first time that a hominin species had ventured beyond Africa, and occurred 2 million years before modern humans replicated this great feat of exploration. They may have been encouraged to spread so rapidly by the expansion of grassland during this period, driven by climate change. This created more habitats for plant-eating animals and so increased the amount of available prey.

Homo erectus was the first of our ancestors to physically resemble modern humans. They were taller and their brain was larger than previous hominin species such as Australopithecus sp. or Homo habilus.

They had a slightly different face to us: it was flatter with more prominent brow ridges.

There are clear differences in the size and shape of the skull in Homo sapiens compared to other human-like species including Homo erectus (schematic). from www.shutterstock.com

The long legs and the fact that they were fully upright meant Homo erectus individuals were efficient walkers and could cover larger ranges than their ancestors.

Their body shape also meant that they could control their temperature and water balance well and so were well suited for living in open forests.

What did they eat?

Homo erectus were probably advanced scavengers who augmented their diet with some predation rather than sophisticated hunters. In fact, they probably occupied a similar ecological niche to hyenas today.

The importance of meat in their diets is still contested, with some researchers considering they were primarily meat eaters and others believing that they had a much broader diet.

How smart where they?

Homo erectus was much smarter than previous hominins, being the first species to use fire and may have been the first to live in hunter-gather groups. They made stone tools in a style called the Acheulian, characterised by distinctive hand axes.

Despite this, their cognitive ability fell a long way short of modern humans. There is currently no evidence that Homo erectus was capable of undertaking modern behaviours such as using language or making art.

The importance of the recent discovery of archaeological material attributed to Homo erectus in the Philippines helps us learn more details about what this species may have been capable of.

Previously, it was widely accepted that Homo erectus was not able to undertake water crossings. This theory fitted with their presence as far as Java, but not across deeper water represented by the Wallace line to travel further east.

A discovery in the Philippines (and possibly in Sulawesi) overturns this, and opens the exciting possibility that Homo erectus may have been more capable sailors than we previously thought.

How are they related to us?

This somewhat confusing situation is actually far clearer than the early history of Homo erectus where a wide range of names including Anthropopithecus, Homo leakeyi, Pithecanthropus, Sinanthropus, Meganthropus, and Telanthropus were used. The reason for this complexity is that Homo erectus (whatever you choose to call them) have a comparatively wide range of morphological characteristics making it difficult to decide how much diversity to include within the definition of the species.

What is clear is that Homo erectus sits somewhere on the human lineage as an ancestor to modern humans, serving as a transition from early hominins such as Australopithecus to Homo heidelbergensis, Homo neanderthalensis and Homo sapiens.

Read more: We know why short-statured people of Flores became small – but for the extinct 'Hobbit' it's not so clear

What next for Homo erectus?

No area of archaeology has seen such vibrant change in recent years than how we understand our family tree. New species have been discovered (and debated) and the ages of the earliest examples of various species are constantly being revised. Unfortunately we only have limited fossils to work with and so new specimens and sites can quickly change our understanding of human evolution.

There is no doubt that ancient DNA studies will contribute to resolving this uncertainty – however DNA sequences have not yet been recovered from Homo erectus. We await this eventual discovery with baited breath!