At a fleeting glance, the study of life – biology – seems very separate from that of rocks, or geology.

But a look back through history shows that geological processes have been key to the evolution of life on Earth. Geology has shaped biology by creating favourable conditions, and indeed the basic “ingredients”, for life’s emergence and evolution.

And now there is growing evidence that this also works in reverse: life has shaped our planet’s atmosphere, oceans and landscapes in many ways.

Let’s take a walk back through time.

Our planet is a living organism

Early in the 20th century, Russian scientists posited that living organisms shape their environment in a way that allows life to be sustained. In the 1970s, a similar idea known as the “Gaia hypothesis” emerged in the Western world, thanks to scientists James Lovelock and Lynn Margulis.

Life started shaping the planet as soon as it appeared, possibly as early as 3.7 billion years ago. Back then radiations from the Sun were not as strong as today and without a little help, the whole planet should have remained frozen.

That little help may have come from bacteria producing the heat-trapping gas methane, with significant amounts of this greenhouse gas released into the atmosphere.

Much later – some 200 million years ago – a similar relationship happened in reverse. At this time, more complex lifeforms may have prevented a runaway build-up of carbon dioxide in the atmosphere (as seen on Venus) by trapping CO₂ in the skeleton of marine organisms like plankton. These then later became buried at the bottom of oceans to form limestones. 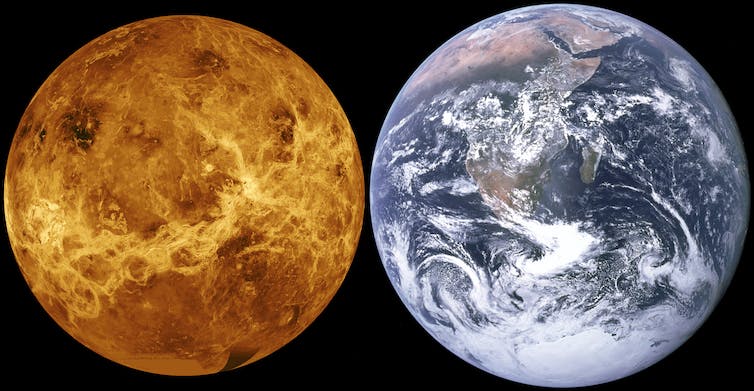 If it wasn’t for plankton, Earth (right) could have looked much like Venus (left). Wikimedia commons

We are made of star dust

The chemical elements that compose our body were made in the explosion of a star – we are made of star dust! We share the origin of our atoms with everything around us, including rocks.

Weathering of mountains, and continents in general, also delivers essential nutrients to marine lifeforms. One example is phosphorus, which is released into rivers and oceans by weathering of the mineral apatite found in continental rocks. Phosphorus is also a building element of DNA molecules, and of adenosine triphosphate (ATP), the “rechargeable battery” responsible for energy transfers in our cells.

Read more: How Eurasia's Tianshan mountains set a stage that changed the world

The first widespread emergence of continents could have been key to the first oxidation of the atmosphere (called the Great Oxidation Event, about 2.4 billion years ago). By providing essential nutrients like phosphorus, weathering of the first continents would have allowed photosynthetic cyanobacteria that make up stromatolites to thrive and release oxygen into the atmosphere. 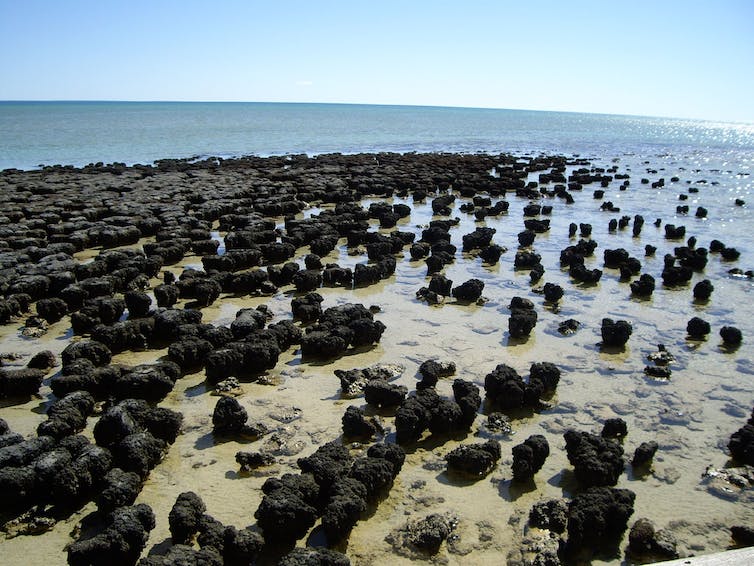 The big beast needs the little one

In 2018 we learned that at the start of the Jurassic Period (about 200 million years ago), plankton began to mineralise at greater ocean depths. Plankton produces oxygen as a byproduct of photosynthesis – and so, as a result, oxygen began to accumulate in the shallow oceans and reach its present level in the atmosphere.

The increase in atmospheric oxygen to modern levels would have allowed larger organisms to flourish (including the dinosaurs), because they have higher requirements for this element.

So not only is plankton a key piece of the ecological puzzle – because so many marine lifeforms depend on it – but it also gave the right conditions for the evolution of large marine reptiles. 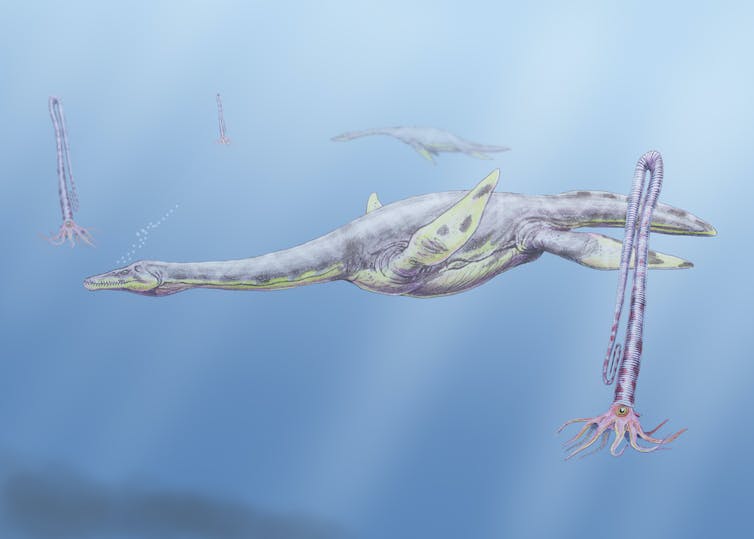 Aristonectes (meaning ‘best swimmer’) is an extinct genus of plesiosaur, perhaps one of the many marine reptiles thankful for the role of plankton on ocean oxygenation. Wikimedia commons

Read more: A map that fills a 500-million year gap in Earth's history

So the next question is naturally: what allowed plankton to mineralise differently during the Jurassic Period? Perhaps moving tectonic plates.

As a result, continents experienced more abundant rainfall and rocks weathered more extensively, releasing to the oceans the elements necessary for plankton to build a calcium carbonate skeleton.

Global plate reconstruction between 330 and 150 million years ago, showing the distribution of major ocean basins and continental plates at 1 million year intervals. An approximation for the extent of the continents is shaded brown, and present-day coastlines are shaded green. Black lines with triangles indicate subduction zones, and black lines denote mid-ocean ridges and transform faults. The tropics, between 23.45 N and 23.45 S, are highlighted by the red band.

These processes close the loop between biology and geology. Tectonic plates moving into the tropics resulted in large supply of elements, allowing for the emergence of calcareous plankton, and this plankton in turn was responsible for the last major rise in atmospheric oxygen.

Read more: Curious Kids: How was the ocean formed? Where did all the water come from?

Humans are increasingly aware that they have shaped the planet to an unprecedented extent due to the emission of greenhouse gases linked to the Industrial Revolution, 200 years ago, and to the advent of the Agricultural Revolution some 8,000 years ago.

Cyanobacteria, vascular plants and plankton have also modified the whole chemistry of Earth’s atmosphere well before humankind, over much longer time scales.

However, there are striking differences between Homo sapiens on the one hand, and plankton and plants on the other. Humans are shaping the planet in a way that may eventually send the species itself into oblivion (and many others with them).

Our species is most likely the first to have the abilities to recognise and mitigate its impact on the environment on which it depends.