Researchers have developed a test that could be used to diagnose all cancers. It is based on a unique DNA signature that appears to be common across cancer types.

The test has yet to be conducted on humans, and clinical trials are needed before we know for sure if it can be used in the clinic.

Each cancer type, whether it be breast or bowel cancer, has different genetic and other features. A test that detects one cancer may not work on another. Researchers have long been looking for a commonality among cancers to develop a diagnostic tool that could apply across all types.

Our research, published in the journal Nature Communications, has found that cancer DNA forms a unique structure when placed in water. The structure is the same in DNA from samples of breast, prostate and bowel cancers, as well as lymphoma. We used this discovery to develop a test that can identify the cancerous DNA in less than ten minutes.

How our test works

Current detection of cancer requires a tissue biopsy – a surgical procedure to collect tissue from the patient’s tumour. Researchers have been looking for a less invasive diagnostic test that can detect cancers at an earlier stage. One possibility, still in development, is a liquid biopsy, testing for circulating cancer DNA in the blood.

Nearly every cell in a person’s body has the same DNA, but studies have found that cancer’s progression causes this DNA to undergo considerable reprogramming.

This change is particularly evident in the distribution pattern of a tiny molecule called a methyl group, which decorates the DNA.

A normal cell DNA’s distinct methyl pattern is crucial to regulating its machinery and maintaining its functions. It is also responsible for turning genes on and off. Altering this pattern is one of the ways cancer cells regulate their own proliferation.

This methyl patterning has been studied before. However, its effect in a solution (such as water) has never been explored. Using transmission electron microscopy (a high-resolution microscope), we saw that cancerous DNA fragments folded into three-dimensional structures in water. These were different to what we saw with normal tissue DNA in the water. 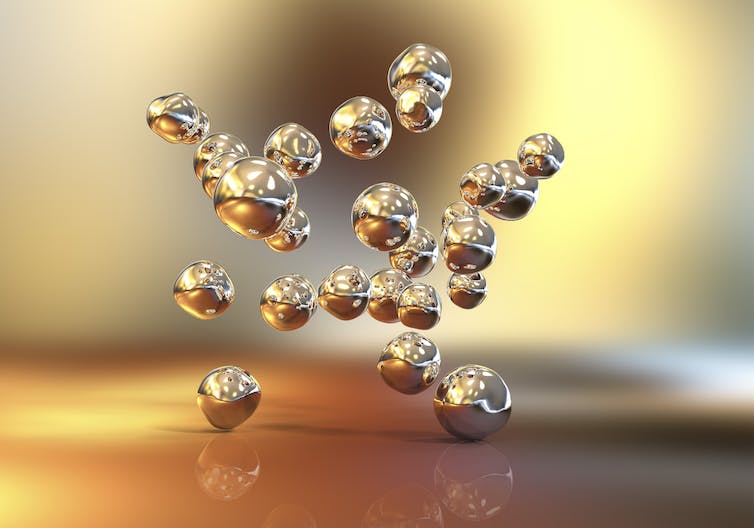 Gold particles are often used in the lab to help detect biological molecules. from shutterstock.com

In the lab, gold particles are commonly used to help detect biological molecules (such as DNA). This is because gold can affect molecular behaviour in a way that causes visible colour changes. We discovered that cancerous DNA has a strong affinity towards gold, which means it strongly binds to the gold particles.

This finding directed us to develop a test that can detect cancerous DNA in blood and tissue. This requires a tiny amount of purified DNA to be mixed with some drops of gold particle solution. By simply observing the colour change, it is possible to identify the cancerous DNA with the naked eye within five minutes.

The test also works for electrochemical detection – when the DNA is attached onto flat gold electrodes. Since cancer DNA has higher affinity to gold, it provides a higher relative electrochemical current signal in comparison to normal DNA. This electrochemical method is highly sensitive and could also eventually be used as a diagnostic tool.

For this test to work properly the DNA must be pure. So far we have tested more than 200 tissue and blood samples, with 90% accuracy. Accuracy is important to ensure there are fewer false positives – wrongly detecting cancer when there is none.

The types of cancers we tested included breast, prostate, bowel and lymphoma. We have not yet tested other cancers, but because the methylation pattern is similar across all cancers it is likely the DNA will respond in the same way.

It is a promising start, though further analysis with more samples is needed to prove its clinical use.

The next step is to do a large clinical study to understand how early a cancer can be detected based on this novel DNA signature. We are assessing the possibility to detect different cancer types from different body fluids from early to later stages of cancer.

We are also considering whether the test could help monitor treatment responses based on the abundance of DNA signatures in body fluid during treatment.