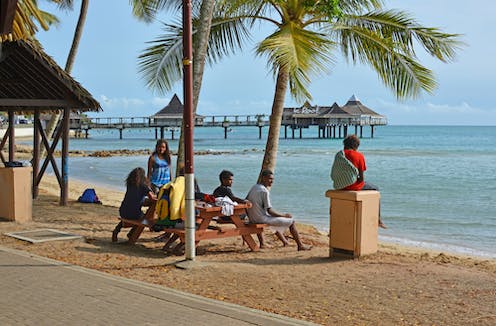 The November 4 referendum in New Caledonia was a breathtaking example of democracy in action, with new consequences for the French territory, France and our region.

The vote had been long-deferred, long-awaited and for some, long-feared. It took place peacefully, a major and poignant achievement that was unimaginable 30 years ago, before the Matignon/Noumea Accords were signed. They were designed to end civil war, promising the hand-over of a number of autonomies, to be followed by this referendum.

The result favoured staying with France by 56.4% to 43.6%. Key characteristics were the strong turnout, especially by young Kanaks, the relatively strong vote for independence, and bitter division between the two sides.

Read more: Explainer: New Caledonia's independence referendum, and how it could impact the region

Voting queues were long, with many waiting two hours to vote. Voting is not compulsory in New Caledonia, and the turnout was an extraordinary 80.63% of those eligible to vote (all Indigenous Kanaks, and a large proportion of those from other communities with longstanding residence in New Caledonia). This is the highest in recent history, with levels at the last French national elections 37% (2017) and provincial elections 67% (2014).

As French President Emmanuel Macron noted hours after the polls closed, France has fulfilled its promise and delivered a transparent process, legitimised by the unprecedented high turnout, the attendance of 13 UN observers and a Pacific Islands Forum observer team.

What does it mean for New Caledonia?

This relatively close result is probably the best all round for stability. The campaign has been bitter, and even commentary between leaders in television coverage of the results saw strong denunciation, particularly by loyalists.

While potentially stoking fear among loyalists for the future, the sizeable independence vote nonetheless may give pause to their tendency to triumphalism, challenging opinion polls and their own belief that they would win at least 60% and possibly 70% of the vote.

In their confidence, just days before the vote, the loyalists declared that with a massive win, they would seek to reverse the Noumea Accord guarantee of a second and potentially third referendum, an inflammatory step for independence supporters.

For independence leaders, the result vindicates their careful strategy of negotiating under the Noumea Accord for potentially two more votes in 2020 and 2022 in the event of a “no” vote, automatic participation for all Indigenous Kanaks, and mobilising the young.

Young Kanaks voted in large numbers, peacefully, and apparently for independence. This was so even in mainly European Noumea, which returned a surprising 26.29% “yes” vote.

With natural population growth, their numbers will increase as 18-year-olds become eligible to vote in 2020 and 2022. In contrast, the number of voters from other long-standing communities will vary little during this time-frame.

Independence leaders can also work to improve the vote from Kanak island communities, whose turnout remained at traditional lower levels, and those who may have responded this time to one independence party’s call for a boycott.

What does it mean for France?

The relatively close result means both sides may be more likely to participate constructively in the ongoing dialogue process set up by France.

Macron has urged New Caledonians to overcome division and continue the 30-year process “in favour of peace”, emphasising dialogue. He referred to a future within France and the Indo-Pacific. Prime Minister Édouard Philippe visited the territory on November 5 to continue dialogue and urge calm.

The task of France remains delicate: to manage, impartially, a process respecting the positions of both sides. It’s complicated by the fact the 43.6% favouring independence are largely Indigenous Kanaks. They are not leaving, they have regional support, and their interests must be considered in any long-term future.

On the positive side, positions canvassed by independence and loyalist parties alike threw up areas of shared interest that can form the basis of future cooperation. Provincial elections in May 2019 will clarify their support, but risk being undermined by extremist parties on both sides.

What are the implications for the region?

The result guarantees continued regional and international interest in the next steps. Reports of the Pacific Islands Forum and UN observer teams will be considered by their organisations. New Caledonia continues to be represented by the pro-independence Kanak and Socialist National Liberation Front (FLNKS) at the Melanesian Spearhead Group (MSG).

Separatists in Bougainville (Papua New Guinea), set for their own independence referendum next year, and West Papua, both the subject of MSG attention, will take heart.

Macron’s invocation of his Indo-Pacific vision engaging New Caledonia specifically to counter China gives a new edge to the interest in the referendum process by regional countries and partners.

Australia, meanwhile, will continue to retain a close interest in stability in our near neighbour, respecting the process while continuing cooperation with France.