This is an article from Curious Kids, a series for children. The Conversation is asking kids to send in questions they’d like an expert to answer. All questions are welcome: find out how to enter at the bottom. You might also like the podcast Imagine This, a co-production between ABC KIDS listen and The Conversation, based on Curious Kids.

If a star explodes, will it destroy the Earth? – Sascha, age 8, Hurstbridge Victoria.

What a great question. Thank you, Sascha. The answer is a resounding “I hope not!”

Luckily for us, not all stars explode and then die. When stars age, they change from a dwarf star (our Sun is actually currently a dwarf star) into a giant star. If a star is big enough it can then explode in what we call a “core-collapse supernova”. But it would need to be around ten times more massive than our Sun for that to happen. 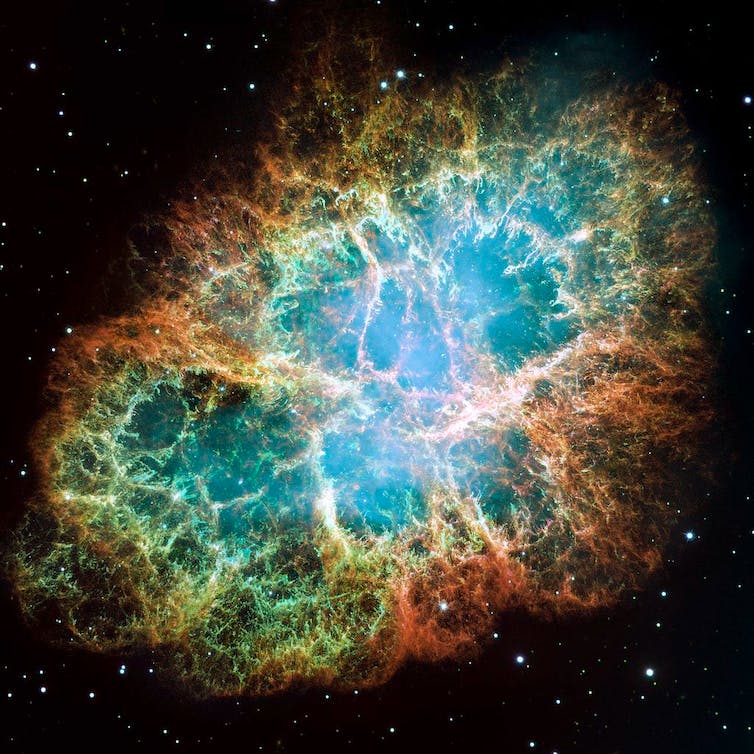 Crab Nebula - the remnant of an exploding star. Wikipedia

So, we’re safe from the Sun exploding. But that doesn’t mean we’re safe in general, because giant stars are big!

In several billion years, the Sun will run out of hydrogen (that’s a gas it burns for fuel) and as it shifts to sticking different atoms together it will expand outwards. First, it will swallow Mercury. Then Venus. And then it will swallow Earth.

This is not great for Earth.

The good news is we have billions of years to prepare for this and leave the planet, if humans are even still around by then.

But you asked about exploding stars. So are there stars other than the Sun, which might explode soon close to us?

Yes, there are! As long as by “soon” we mean within a million years. 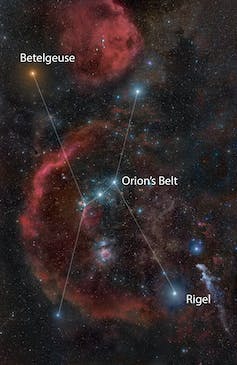 The Orion nebula and Betelgeuse. Wikipedia

If you find the constellation Orion in the sky, there is a bright red star at one end – this is Betelgeuse. It is a red supergiant star – so big that if we swapped its position with the Sun, Betelgeuse would swallow Mars, and the asteroid belt. It might also swallow Jupiter as well.

And within the next million years Betelgeuse is expected to explode. Luckily for us, it is around 600 light years away, far enough that when it explodes Earth is safe.

When Betelgeuse explodes it will be so bright that it will outshine the full moon for over a month. We’ll be able to see it in the day time and walk around at night, able to see solely from Betelgeuse’s light.

But it won’t destroy the Earth.

The good thing about space is that – even though it has lots of dangerous stuff floating in it – it’s so big and empty that it almost doesn’t matter. 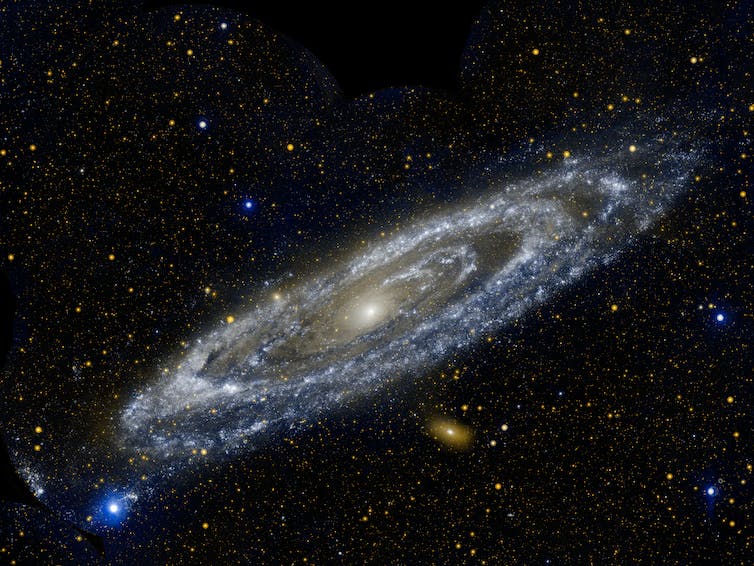 The Andromeda galaxy - currently heading straight towards us! Wikipedia

Two galaxies smashing together and merging into one sounds catastrophic. But space is so empty that even with the hundreds of billions of stars from the Andromeda galaxy shooting towards us, we don’t expect any collisions between stars at all. There’s just too much space between them. That’s not just with our Sun, but with any of the billions of stars in the Milky Way.

It’s crazy how big space is!

Read more: Curious Kids: Why is the Earth round?