Curious Kids is a series for children, where we ask experts to answer questions from kids. All questions are welcome: find out how to enter at the bottom. You might also like the podcast Imagine This, a co-production between ABC KIDS listen and The Conversation, based on Curious Kids.

I am 4 and I live in Melbourne, Australia. Is there anything hotter than the sun? – Carys Mae, age 4, Melbourne.

Yes, Carys; there are lots of places in our Universe where it’s much hotter than the Sun.

Our Sun is a giant ball of gas that is 6000 degrees Celsius at the surface and millions of degrees in the centre. That is very hot! A kettle of boiling water is scalding hot and it’s “only” 100 degrees Celsius.

Our Sun gets so hot because the gas inside burns in a special way that turns some of the gas into lots of energy.

The Sun is a star – and the stars of the night sky are Suns a bit like our own. Some stars are much bigger than our Sun (and weigh a lot more too), and are even hotter inside. In some cases it’s hundreds of millions of degrees inside the star!

The only reason stars don’t explode straight away is that they are so heavy that the force of gravity keeps the star together. In the same way, our Sun’s own gravity holds it together in a nice steady way for a very long time – billions of years. Lucky for us. 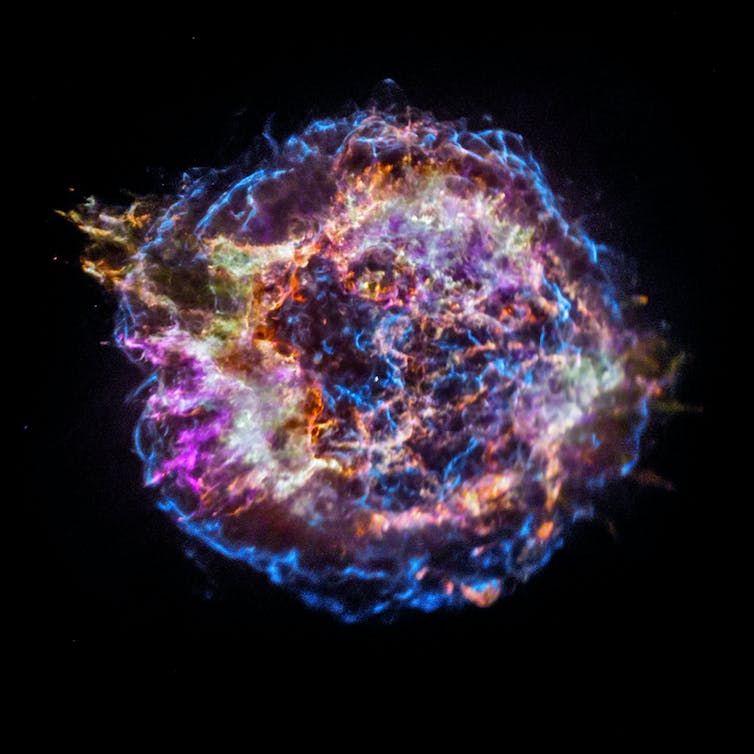 An image of supernova remnant Cassiopeia A. NASA/CXC/SAO, CC BY

Read more: Curious Kids: Why is a magpie's poo black and white?

For stars that are heavier than our Sun, the gas inside burns a lot quicker and can suddenly run out of energy. The inner part of the star falls towards the star’s centre because of gravity. The outer part of the star first falls inwards too, but bounces off into space. This spectacular event is called a supernova, and can produce temperatures of millions of degrees.

When a massive star supernovas, the really dense part leftover can either be what scientists call a neutron star or a dark black hole. These tiny, yet incredibly heavy objects can suck up gas and dust around them, creating a lot of heat - sometimes temperatures in the millions of degrees.

Two neutron stars can fuse together to become one, in an event called a kilonova, and that makes things very hot too – million of degrees.

Stars shine because they are hot, and so they light up the night sky in a beautiful way. Lots of heat is also made by stars as they shine, and especially when a star dies in a supernova, or a kilonova occurs.

The amazing thing is that this heat also makes new atoms – tiny particles that have made their way long ago from stars to us. Atoms are like building blocks – everything in your life, even your own body, is made of atoms. Lots of different atoms made by far away stars have found their way here, to make up the Earth, Moon, the Sun and you.

So stars don’t just make heat, but have also made the atoms of our bodies and everything we see around us here on Earth.

As the astronomer Carl Sagan said, we are all “star stuff” – and this is because stars are very hot places!

Read more: Curious Kids: Why do flies vomit on their food?