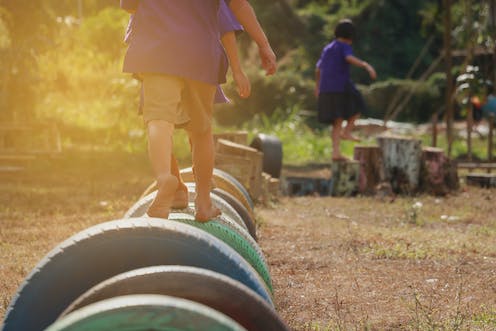 A Sydney playground was closed earlier this year after children and adults suffered a spate of injuries including broken bones, burns and bruises on a giant tube-slide. The Hilltop Playground had been open for less than one month. The...

A Sydney playground was closed earlier this year after children and adults suffered a spate of injuries including broken bones, burns and bruises on a giant tube-slide. The Hilltop Playground had been open for less than one month. The injuries were described as “horrific” and the media questioned “how the 30m-long, 14m-tall slide passed safety rules”.

Meanwhile SA Health and KidsafeSA have initiated an awareness campaign calling for certain baby and toddler products, such as walkers and exercise jumpers (known as Jolly Jumpers), to be banned. They’ve claimed these are associated with issues such as developmental delay and stiff muscles in children.

Excessive time in walkers and jumpers teaches babies to stand up on their tip-toes, causing calf muscle tightening, affecting their ability to walk, and in some cases requiring treatment with casting or surgery.

Child injury prevention programs may seek to limit risky play. But is the consequence of this a negative impact on children’s physical activity, motor skill development and mental health and well-being? 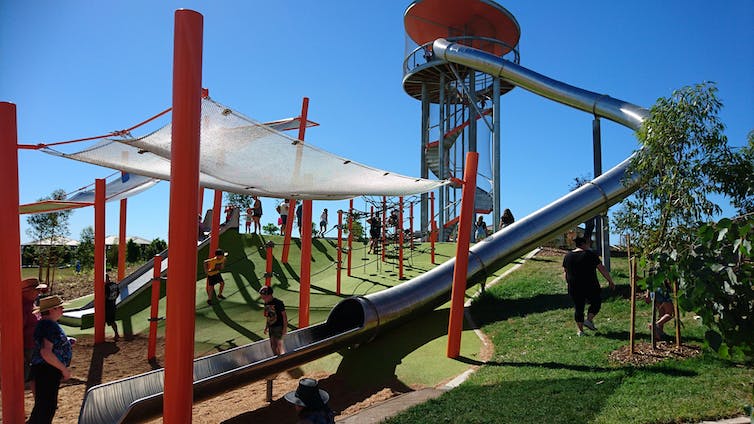 New designs such as the Hilltop slide ought to have been tested and commissioned prior to opening. ParraParents

A review of studies into this question shows greater positive effects of risky outdoor play on health compared with the risks of inactivity in children. Though, as we write today in the Medical Journal of Australia, parents must be aware of the limitations in product safety standards and understand the delicate balance between healthy play, parental or carer surveillance and safety standards.

Read more: What is physical activity in early childhood, and is it really that important?

Injury surveillance data are limited in Australia, and likely underestimate the true picture. A recent report shows around 686,409 Australian children were hospitalised following an injury between 2002-2012. Roughly 1,000 children died soon after an injury, more due to transport accidents than other injury causes. 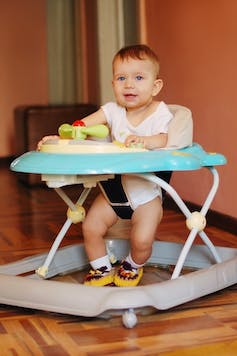 Some parent groups are calling for children’s products such as baby walkers to be banned. from shutterstock.com

The development, application and utility of product standards is poorly understood by the broader community, medical practitioners and parents. When injuries occur while children are at play, the question often asked is “who is responsible?”. There is a misconception that product standards can prevent all injuries. But this is never their intended purpose.

All product standards set minimum design requirements to facilitate consumer safety, contemplating “reasonably foreseeable use” and patterns of “reasonably foreseeable misuse”. They cannot prevent all injuries. Rather, they concentrate on preventing or mitigating more serious injuries based on existing evidence of injury patterns.

New information can update our understanding of associated risks, just as our understanding evolved about the risk of cancer caused by cigarettes. New product designs, such as the Hilltop slide, can create new hazards that existing standards didn’t anticipate. Injury surveillance data do not exist yet for these either. So, new designs such as the Hilltop slide ought to have been tested and commissioned prior to opening.

Australia’s safety standards for playground equipment and surfaces are voluntary, unless the owners or developers of the site require the contractor to abide by them. The standards aim to address both industry governance and injury prevention, but it is vital the community at large (parents and health professionals specifically) understand the limitations and scope of current Australian standards.

Only a minority of products in Australia actually have mandatory standards applied to them. Many available play products provide play spaces that offer children containment for safety, while parents attend to other tasks. However, they can have unanticipated risks.

Baby walkers are one product that do have a mandatory standard. This aims to prevent anticipated injury by requiring braking mechanisms to prevent falls down steps or stairs, or any over-balance.

But such design and performance constraints don’t cover recent evidence of developmental delay suffered from too much time in these devices as well as in exercise jumpers known as jolly jumpers.

It’s worth remembering that the evidence shows the benefits of physical activity outweigh the risks of injury. Keeping a child safe involves ensuring parental supervision and safety standards are at work at all times.