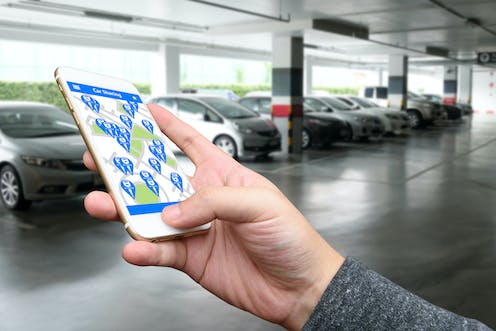 Car sharing arrived on the Australian scene in the early 2000s. These are commercial services that give people access to vehicles they can rent by the hour.

Services in Australia currently include GoGet and Car Next Door. While GoGet has a fleet of vehicles available for rent, Car Next Door supports private vehicle owners renting out their cars to others in the community (kind of like Airbnb).

Car sharing is now an established transport option in most major Australian cities, but it’s faced its fair share of teething problems. Some of these are unique to Australia, with its powerful system of private car dependency. We’re now on track to overcome many of these issues, but more work is required to really make Australian car sharing a success.

Why is car sharing important?

Car sharing is key component of any transition away from a dependence on private cars. Most of us are now aware that using private cars is one of the most carbon intensive and least healthy ways to get around.

To challenge the place of the private car, we need to supply a network of options. The hope is that owning a car will one day become unnecessary in an integrated system of public and active transport options, where shared cars would play a role in more complex or load-carrying trips.

Car sharing is particularly important in a world on the cusp of the arrival of autonomous vehicles (AVs). AVs could herald either “carmageddons” of congestion, where private autonomous vehicles roam the city at the whim of their owners, or a more palatable system, where on-demand AV services seamlessly match trips to riders. Which version of the future we get depends on whether AVs are shared or privately owned.

Here are some key factors that will shape future success of car sharing in Australia.

Heading the list of barriers to increased uptake of car sharing is that it’s currently a service that is generally contained within the inner urban core of our cities.

Commercial options – where companies maintain their own fleet of vehicles – rely on a critical mass of people, the allocation of prized on-street car parking, and a viable public transport system to satisfy the day-to-day mobility needs of their members. These things generally don’t exist outside of the inner city, so neither does commercial car sharing.

Peer-to-peer (P2P) options – where the carsharing company facilitates the sharing process between individuals – offer some hope of a breakthrough in this space. P2P car sharing is more likely to succeed in lower density areas because it does not need the critical mass of users, nor the gift of on-street car parking.

While the slow creep of P2P services into the suburbs is a process bound by the notorious sluggishness of cultural adjustment, we are witnessing some increased suburbanisation of car sharing as a result of P2P services.

The need for cultural adjustment raises a second key barrier to car sharing in Australia. Anyone living through the recent bike sharing fiasco in Sydney or Melbourne, where bikes were dumped in parks and rivers, will attest to the fact that (some) Australians are not great at respecting property that is shared. In fact, there are indices of national culture that could have easily predicted the vandalism associated with this catastrophe.

And when it comes to our cars, we are a nation particularly attached to the independence, autonomy and privacy of our own vehicle. Sharing – whether it be lending your own car to a stranger, or making use of a car regularly driven by others – challenges these notions.

But parts of our cities are slowly but surely adapting to living in closer proximity to one another – albeit by necessity, not by choice. And as a nation, we are becoming less attached to owning the spaces and objects we depend upon.

This shift away from personal space and private ownership can primarily be seen in changes to residential densities and tenure-types. But it’s also seen in the way we work, play and eat. Think of the rise of hot-desking, the shift from private backyards to public parks, and the move from the family table to the café.

The pioneers of car sharing in Australia – both the business entrepreneurs and the policy makers – have had to navigate some pretty tricky regulatory, legislative and technological territory.

Commercial operations have negotiated with local government for parking space, and P2P ventures have had to work through complex registration and insurance regulations that vary from state to state. Both approaches have had to design and implement technology that allows cars to be booked and accessed seamlessly.

Fortunately, for those doing the sharing, a lot of these barriers have now been broken down. Most metropolitan local councils now maintain a policy for the allocation of car sharing parking spaces. Insurance cover for P2P sharing is now a standard option.

Read more: Cars cost more in the country: here's some ways around it

The future of car sharing

There are changes on the horizon all designed to make the concept of sharing even easier. One of the most interesting is the imminent arrival of “share ready” cars on the Australian market.

Designed primarily for the P2P market, these are cars that come with an app, which connects owners’ vehicles to their phones, enabling them to list their car for rent on car sharing websites. The sharer will then be able to access and drive the vehicle using their smart phone, entirely negating the need for traditional keys.

Involvement of the auto-industry is always an interesting development in car sharing. It has been proven empirically that people who use car sharing services drive less and own less cars. This implies less business for car manufacturers. Does this mean the car industry is accepting fissures in the dominance of private cars and protecting whatever share of the transport market it can? Or is it another way of keeping cars king in our cities?

Only time will tell. For the time being, car sharing’s survival is one positive sign that a sustainable transport future is possible.