When G20 finance ministers met in Bali last week to review economic developments in the lead-up to the annual G20 summit, they could not ignore troubling signs in the global economy driven by concerns about an intensifying US-China trade conflict.

Last week’s slide in equities markets will have served as a warning – if that was needed – of the risks of a trade conflict undermining confidence more generally.

China’s own Shanghai index is down nearly 30% this year. This is partly due to concerns about a trade disruption becoming an all-out trade war.

Read more: The risks of a new Cold War between the US and China are real: here's why

IMF Managing Director Christine Lagarde’s call on G20 participants to “de-escalate” trade tensions or risk a further drag on global economic growth might have resonated among her listeners in Bali, but it is not clear calls to reason are getting much traction in Washington these days.

Uncertainties caused by a disrupted trading environment are already having an impact on global growth. In its latest World Economic Outlook, the IMF revised growth down to 3.7% from 3.9% for 2018-19, 0.2 percentage points lower than forecast in April. 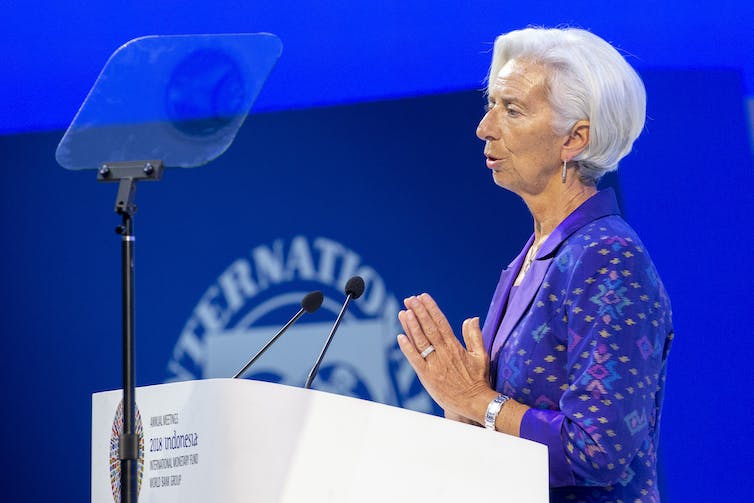 The IMF is predicting slower growth for the Australian economy, down from a projected 2.9% this year to 2.8% next year. The May federal budget projected growth of 3% for 2018-19 and the following year.

Adding to trade and other tensions between the US and China are the issues of currency valuations, and a Chinese trade surplus.

In September, China’s trade surplus with the US ballooned to a record U$34.1 billion.

This comes amid persistent US complaints that Beijing has fostered a depreciation of the Yuan by about 10% this year to boost exports, which China denies.

These are perilous times in a global market in which the US appears to have shunned its traditional leadership role in favour of an internally-focused “America First” strategy.

So far, fallout from an increasingly contentious relationship between Washington and Beijing has been contained, but a near collision earlier this month between US and Chinese warships in the South China sea reminds us accidents can happen.

This is the background to a meeting at the G20 summit in Buenos Aires late in November between US President Donald Trump and Chinese President Xi Jinping. That encounter is assuming greater significance as a list of grievances between the two countries expands.

US Vice President Mike Pence’s speech last week to the conservative Hudson Institute invited this question when he accused of China of “malign” intent towards the US.

Are we seeing the beginning of a new cold war?

The short answer is not necessarily. However, a further deterioration in relations could take on some of the characteristics of a cold war, in which collaboration between Washington and Beijing on issues like North Korea becomes more difficult.

By any standards, Pence’s remarks about China were surprising. He suggested, for example, that Chinese meddling in American internal affairs was more serious than Russia’s interventions in the 2016 president campaign.

He accused Beijing of seeking to harm Republican prospects in mid-term congressional elections and Trump’s 2020 re-election bid. This was a reference to China having taken its campaign against US tariffs to newspaper ads in farm states like Iowa.

Soybean exports to China have been hit hard by retaliatory tariff measures applied by Beijing in response to a first round of tariffs levied by the US.

This is probably true, but it could also be said that much of the rest of the world – not to mention half of the US population – would like a different American president.

All this unsteadiness – and talk of a “new cold war” – is forcing an extensive debate about how to manage relations with the US and China in a disrupted environment that seems likely to become more, not less, challenging.

Australian academic debate, including contributions from various “think tanks”, has tended to focus on the defence implications of tensions in the South China Sea for Australia’s alliance relationship with the US.

This debate has narrowed the focus of Australia’s concerns to those relating to America’s ability – or willingness – to balance China’s regional assertiveness.

This assertiveness increasingly is finding an expression in China’s activities in the south-west Pacific, where Chinese chequebook – or “debt-trap” – diplomacy is being wielded to build political influence.

Australian policymakers have been slow to respond to China’s push into what has been regarded as Australia’s own sphere of influence.

Leaving aside narrowly-focused Australian perspectives, it might be useful to get an American view on the overarching challenges facing the US and its allies in their attempts to manage China’s seemingly inexorable rise.

Among American China specialists, few have the academic background and real-time government experience to match that of Jeffrey Bader, who served as President Barack Obama special assistant for national security affairs from 2009-2011.

In a monograph for the Brookings Institution published in September, Bader poses a question that becomes more pertinent in view of Pence’s intervention. He writes:

Ever since President Richard Nixon opened the door to China in 1972, it has been axiomatic that extensive interaction and engagement with Beijing has been in the US national interest.

The decisive question we face today is, should such broad-based interaction be continued in a new era of increasing rivalry, or should it be abandoned or radically altered?

The starkness of choices offered by Bader is striking. These are questions that would not have entered the public discourse as recently as a few months ago.

He cites a host of reasons why America and its allies should be disquieted by developments in China. These include its mercantilist trade policies and its failure to liberalise politically in the three decades since the Tiananmen protests.

However, he concludes the costs of distancing would far outweigh the benefits of engagement to no-one’s advantage, least of all American allies like Japan, India and Australia.

None of these countries, in Bader’s words, would risk economic ties with China nor join in a “perverse struggle to re-erect the ‘bamboo curtain'… We will be on our own”. He concludes:

American should reflect on what a world would be like in which the two largest powers are disengaged then isolated from, and ultimately hostile to each other – for disengagement is almost certain to turn out to be a way station on the road to hostility, he concludes.

Bader has been accused of proffering a “straw man argument’’ on grounds that the administration is feeling its way towards a more robust policy, and not one of disengagement. But his basic point is valid that Trump administration policies represent a departure from the norm.

At the conclusion of the IMF/World Bank meetings in Bali, the Christine Lagarde added to her earlier warnings of "choppy” waters in the global economy stemming from trade tensions and further financial tightening. She said:

There are risks out there in the system and we need to be mindful of that…It’s time to buckle up.

That would seem to be an understatement, given the unsteadiness in the US-China relationship and global geopolitical strains more generally.