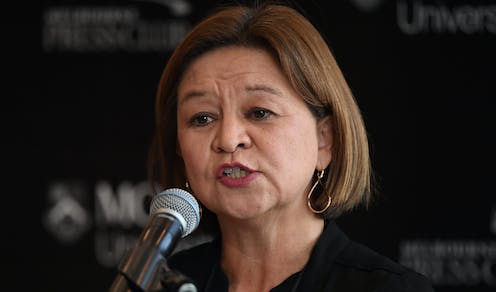 The ABC Board has sacked managing director Michelle Guthrie, declaring in a blunt statement that it was “not in the best interests” of the organisation for her to continue to lead it.

ABC chairman Justin Milne said the board “believed that new leadership would benefit the organisation, its dedicated employees, and the ABC audience”.

The statement said the decision followed several months of discussion.

Guthrie, who was only about halfway through her contract, has been under fire from critics outside the organisation and within it.

News Corp has been unrelenting in its attacks on the ABC, accusing it of political bias and pushing back at the competition it presents to commercial operators.

Guthrie has also been criticised for not standing up for the organisation sufficiently, and for her lack of journalistic experience.

The Australian on Monday reported a split between Milne – who was appointed by the Turnbull government – and Guthrie over the future of the organisation. It cited differences over key projects and how to deal with a hostile Coalition government.

Milne said: “In resolving to seek fresh leadership,the Board’s foremost consideration was the long-term interests of our own people and the millions of Australians who engage with ABC content every week”.

David Anderson will be acting managing director while a search is conducted, internally and externally, for a replacement for Guthrie. He is currently Director, Entertainment & Specialist, responsible for broadcast television networks and associated services, radio music networks, podcasts and specialist radio content

The MD is selected by the board, independently of the government.

“We understand that transitions can be disruptive in the short-term. However, the ABC is fortunate to have an experienced and capable executive team that will provide continuity in the months ahead, ” Milne said.

“The board wishes to thank Michelle for her contribution to the ABC. We are very grateful for all her hard work,” he said.

In a very brief statement, Communications Minister Mitch Fifield – who has been a constant fault-finder of the ABC’s political coverage – said “The government thanks Michelle Guthrie and acknowledges her service as Managing Director of the ABC for the past two and a half years in what is a challenging and rapidly changing media environment.”

Earlier in her career, Guthrie worked for News Corporation and for Google.

Liberal senator Eric Abetz, who repeatedly has attacked the ABC, demanded an explanation of Guthrie’s sacking.

“The dismissal of the Managing Director, seemingly without notice, requires a full and detailed explanation from the ABC Board,” Abetz said.

“I am hopeful that the new managing director will ensure that that the Ultimo-centric broadcaster is more in line with the aspirations of Australians including by delivering benefit to the taxpayer, stopping the left-wing bias and bringing an end to the frolics masquerading as news and ‘comedy’ from some ABC employees,” Abetz said.