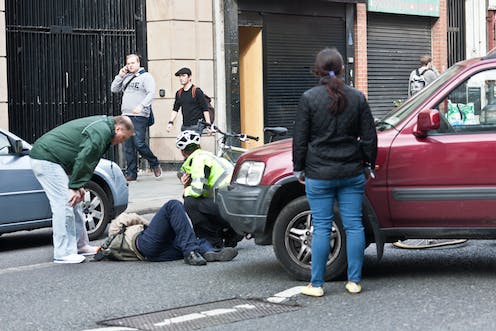 Recent reporting paints a picture of surging road deaths and failing safety strategies for cyclists. The Australian Automobile Association’s Benchmarking report records 1,222 road deaths in the year ending June 2018. And cyclist deaths in particular remain stubbornly high, even as average speeds, which affect road deaths, continue to decline. If cars are much safer than 25 years ago, why are cyclist deaths increasing, from 25 the previous year to 45 this past year?

Of the untimely road deaths the AAA reports, 1,100 are due to how drivers were driving. In Australia, drivers are to blame for at least 79% of accidents with cyclists. And roughly 85% of reported cyclist casualty crashes involve another vehicle, not a bike or a pedestrian. Driver distraction accounts for roughly 25% of accidents.

These stats highlight a clear pattern of deadly harm: drivers hitting people, because of how they’re driving, is 90% of the problem on our roads.

Calls are often made to install separation infrastructure and high-tech sensors in cars to fix the problem, as if the problem is cars and bikes mixing. These calls often follow the publication of reports or the deaths of cyclists in ways that make the news. Such claims are seldom met with critical scrutiny.

Although better infrastructure is needed and warranted, and high-tech sensors might reduce harm, people are still being needlessly killed. Mostly, that’s due to how people drive.

System-wide infrastructure and high-tech improvements are complex and take years or decades to complete. Installation has to be standardised and comprehensive to be truly effective. State-led infrastructure projects are often subject to budget blowouts. In crucial cases, the public has been left without the promised solution or service – regardless of whether it was publicly or privately led.

Indeed, separation contributes to irresponsibility by baking the assumption of danger and vulnerability into infrastructure. It works by diminishing the need for care and attention on the part of those responsible for the greatest harm: drivers.

This approach, we argue, reiterates a stigmatising, criminogenic understanding of bikes as inappropriate, unsafe and unwelcome on “our” roads. In this context, words are not weapons, but when they create aggressive drivers they do weaponise.

Read more: More people will cycle when everyone accepts cyclists' right to be on the road

We need to focus on primary prevention

We’re clearly failing one another here. One way to begin responding better is by taking wisdom and insight from primary prevention approaches to male violence against women. This starts by acknowledging the root cause of systemic instances of deadly violence is banal, routine and excused and explained away because of its alignment with dominant cultural values.

The next step is to respond in ways that keep returning attention to the facts from best evidence. To repeat, whether you’re a driver, occupant, pedestrian or cyclist, roughly 90% of what causes death on Australia’s roads is driver behaviour.

For cyclists, the root cause of deadly harm is aggression and inattention. Drivers should be held to account and be pushed to change their behaviour and attitudes.

So what changes are needed?

Simple inexpensive changes in the law have been found to have dramatic effects on driver behaviour. These changes also work with existing infrastructure, technology, road conditions and our cultural expressions of human nature.

One change that’s in line with primary prevention and strong evidence of success is a move to a model of presumed liability for drivers. This would be a hard sell in light of current settings here, which support and excuse deadly violence by drivers because of the dominant motoring culture. But it’s proven to work in the Netherlands.

Read more: Cars overwhelmingly cause bike collisions, and the law should reflect that

Another welcome measure is a recent initiative to reduce urban speed limits to 30km/h. This has just been implemented in one of Melbourne’s inner urban areas without too much fuss. According to the research behind it, you’re twice as likely to survive being hit at 30km/h as at 40km/h.

Time will tell, but evidence suggests this change will reduce harm and improve traffic flows. As with moving to presumed liability, it does so without expensive infrastructure and unproven gizmos, while following the wisdom of primary prevention by putting the onus on the root cause rather than the victim.

Finally, we urge that this issue be considered as one of universal access to safe transport infrastructure. It’s not about “cars versus bikes”; it’s about the simple right to get where you’re going safely and sensibly. This shouldn’t be a privilege that’s extended only to those with the resources and bodies capable of driving.

In light of this, it’s crucial we note that cars are deadly, that 90% of the problem is driver behaviour, and that the motor car fails on its promise of delivering safe, efficient urban transport.