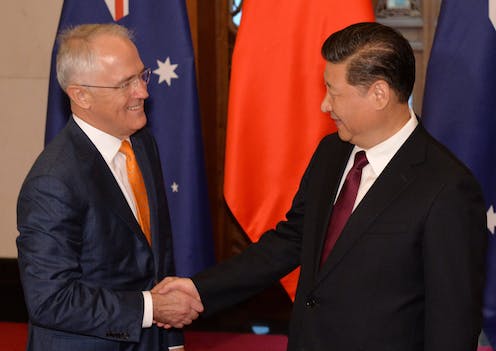 Prime Minister Malcolm Turnbull’s so-called “China reset” should be viewed for what it is. That is, neither a self-criticism of mistakes made in managing the China relationship, nor necessarily a self-confident assertion of Australia’s foreign policy priorities.

For all intents and purposes, Turnbull’s speech at the University of New South Wales last week was an exercise in damage limitation, as he trod lightly over vexed issues in relations with Beijing.

Read more: Australia needs to reset the relationship with China and stay cool

Among the motherhood statements about contributions Chinese-Australians have made to the greater good was a key passage in which Turnbull emphasised a common interest in “free trade and open markets in every part of the world”. He said:

So in the midst of this rapid change, Australia continues to address its own interests by pursuing a relationship with China based on mutual respect and understanding. For our part, we act to advance Australia’s prosperity, ensure independence of our decision-making, and secure the safety and freedom of our people.

After this summation of the national interest, Turnbull reproduced a quote from Chinese President Xi Jinping to the Australian parliament in 2014, long before any thought of a disruptive Donald Trump presidency had materialised. At the time, Xi said:

In doing so, Turnbull sought both to assert Australia’s sovereignty in pursuit of its own interests, and also to remind Xi of China’s commitment to a “rules-based” international order.

This was diplomacy at work, prompted by a realisation that relations with Australia’s cornerstone trading partner have become strained – due partly to Turnbull’s own clumsiness, which I will come to later. His mission on this occasion was to unstrain them.

Beijing has put Canberra in a freeze for the past year or so over statements by both Turnbull and Foreign Minister Julie Bishop that were regarded as unhelpful. China took particular exception to a Bishop speech in which she criticised its political model.

Bishop herself has not been to China for two years. As a consequence, relations are perceived to be drifting or, worse still, in a state of disrepair.

Judging by Beijing’s mild response to Turnbull’s speech via a foreign ministry spokesperson – and the presence in the audience at UNSW of China’s ambassador to Australia and its consul-general in Sydney – the prime minister achieved part of his objective.

This was Australian statecraft at work, driven not by China hawks in Canberra, or advisers who are jaundiced where Beijing is concerned, but by realpolitik.

In other words, no purpose would be served by a continued freeze in relations with Beijing, notwithstanding real policy concerns about Chinese assertiveness in both the South China Sea, and in Australia’s own southwest Pacific sphere of influence.

Turnbull had yielded to diplomatic advice to separate domestic politics from foreign policy, as if such advice should have been necessary.

Department of Foreign Affairs and Trade advisers, led by the Chinese-speaking head of DFAT, Frances Adamson, had secured a “battle victory not a strategic victory”, in the words of a prominent Canberra China-watcher.

Why is a reset needed?

In all of this, the question might reasonably be asked: how did Australia manage to aggrieve its cornerstone trading partner in the first place?

The answer to that question lies partly in Turnbull’s own poor political judgement.

The prime minister makes much of his China experience as a merchant banker seeking to do deals on the frontier of that country’s economic emergence in the 1980s.

On the evidence, Turnbull still has a bit to learn about dealing with China, including the importance of nuance. The Chinese are masters of diplomatic subtleties – unless it suits them to be otherwise.

Turnbull’s error was to frame Australia’s foreign interference laws – aimed at limiting the ability of foreign entities to intrude into Australian domestic politics – in such a way that his public statements caused unnecessary offence in Beijing.

While these laws clearly had China’s state propaganda apparatus and Chinese money in mind, there was no need for Turnbull to rub it in. And yet rub it in he did.

In a surprising display of ineptitude between December 7 and December 9 last year, he said on three separate occasions Australia had “stood up” against outside attempts to interfere in its internal affairs.

On the last occasion, he said it in his own version of Chinese. Such phraseology – “the Chinese people have stood up” – has sacred meaning in China. This was the expression attributed to Mao Zedong when proclaiming the People’s Republic in 1949 after decades of foreign interference, including unspeakable crimes by the Japanese.

It might also be observed that China is not the only country that seeks to influence Australian domestic politics via its various agencies and an active diaspora. Hardly less assiduous in its attempts to exert pressure on an Australian political process is the State of Israel, via its own government and semi-government apparatuses and an assertive domestic lobby.

Complications arise when activities cross a boundary between the legitimate exercise of soft power and attempts to corrupt the political process, or resort to forms of intimidation.

There is no doubt that managing relations with China is challenging, especially at a time when Beijing is constantly testing the limits of what is acceptable in ruthless pursuit of its interests.

A mercantilist China will seek to get away with what it can.

That said, Australia has no choice but to strive to get the balance right in dealing with a rising power whose trajectory is such that by mid-century, or sooner, it will have the world’s largest economy and a military capability that will enable it to project power far beyond its shores.

Turnbull’s early priority should be to restart bilateral interactions at senior level, including a Beijing visit before the year is out either by himself or by Bishop.

Where Turnbull was on firmer ground in his UNSW speech was in the emphasis he laid on shared interests with China on free trade and open markets. Leaving aside Chinese mercantilism in which it invariably seeks to tilt the trade environment in its favour, Turnbull identified what is clearly a common interest, and one that needs to be exploited.

This is resistance to the sort of trade bluster emanating from Washington in which the Trump administration seems bent on disrupting an international trading environment that is being run ragged by capricious policymaking. Turnbull said:

When it comes to trade, we should never forget that protectionism is self-defeating, not a ladder to get you out of the low growth trap, but a shovel to dig it deeper… In trade, there will always be more winners, more growth and more jobs, on a level playing field.

In the end, relations with China can be likened to a long march, in which each step along the way needs to be taken with care – or as Deng Xiaoping might have advised: Cross the river by feeling the stones.