Many of us are familiar with developments of big solar farms in rural and regional areas. These are often welcomed as a positive sign of our transition towards a low-carbon economy. But do large-scale solar installations have a place in our cities?

The City of Fremantle in Western Australia is considering a proposal to use a former landfill site for a large-scale solar farm. The reportedly 4.9 megawatt solar power station on an eight-hectare site would be, it’s said, Australia’s largest urban solar farm. The initiative is part of Fremantle’s ambition to be powered by 100% clean energy within a decade.

The proposal is facing some community opposition, however. Residents are reportedly alarmed by the potential public health consequences of building on a rubbish dump, which risks releasing toxic contaminants such as asbestos into the environment. Other concerns include glare from the solar panels, or excessive noise.

Similar complaints about solar panels in cities are being seen all over the world, with opponents generally of the view “they do not belong in residential areas”. So what are the planning issues associated with large-scale solar installations in cities? And should we be concerned about possible negative impacts?

What is large-scale solar?

According to the Australian Clean Energy Regulator, large-scale solar refers to “a device with a kilowatt (kW) rating of more than 100 kilowatts”. A kilowatt is a measure of power – the rate of energy delivery at a given moment – whereas a kilowatt-hour (kWh) is a measure of the total energy produced (so a 100kW device operating for one hour would produce 100kWh of electricity).

Device here refers to not only the photovoltaic (PV) panels – the actual panels used in solar energy – but also to the infrastructure “behind the electricity meter”. So interconnected panels may still constitute a single device. 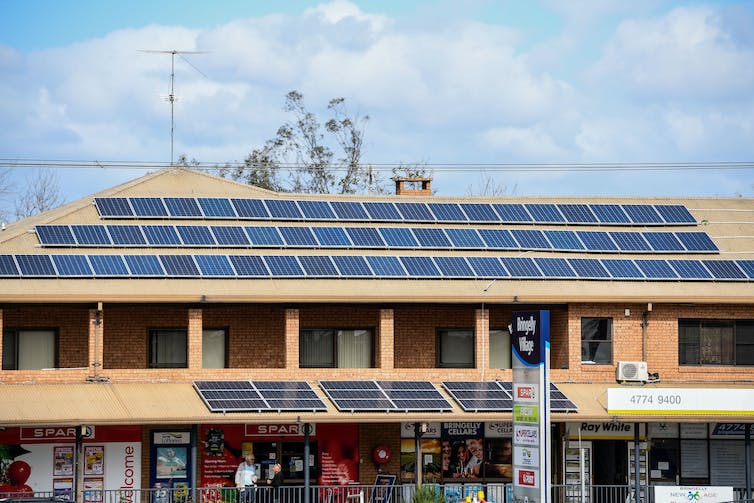 Solar panels adorn many buildings in Sydney, such as this one in Bringelly Village. BRENDAN ESPOSITO/AAP

By this definition, there may already be large-scale solar installations in Australian cities. In Sydney for example, the recently opened system on top of the Alexandra Canal Transport Depot is by all accounts a large-scale solar system. It combines around 1,600 solar panels with enough battery storage for 500kWh of electricity.

Read more: Sydney's closer to being a zero-carbon city than you think

But this is not Sydney’s largest solar installation. That honour is presently held by the Sydney Markets in Flemington, among Australia’s largest rooftop solar installations, which generates around 3 megawatts (that’s 3,000kW). To date, there have been no publicly disclosed complaints received about these facilities.

Large-scale solar (sometimes called “big solar”) can also refer to solar arrays that use mirrors to concentrate sunlight onto solar PV panels. This is different to concentrated thermal solar, which uses mirrors to focus sunlight onto the top of a tower to heat salt, oil or other materials that can then be used to generate steam to power turbines for electricity generation.

What’s the problem with solar in cities?

Internationally, there is increasing recognition cities could be ideal locations for large-scale solar installations due to the amounts of unused land. This includes land alongside freeways and main roads, flood-prone land, and rooftops on factories, warehouses and residences. And locating big solar in cities can also reduce the energy losses that occur with transmitting electricity over long distances.

Australia’s combined rooftop solar installations already supply the equivalent of enough power for all the homes in Sydney. And even former landfill sites – which have few uses other than parkland and are often too contaminated to sustain other land uses such as residential development – can be a good use of space for solar farms. But such sites would need to be carefully managed so contaminants are not released during construction. 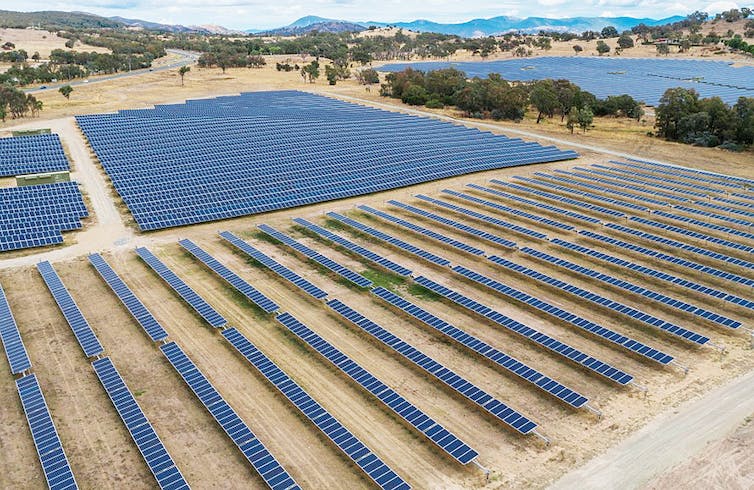 UNSW has set up a plan to have 100% of its energy supplied by photovoltaic solar energy. MAONENG AUSTRALIA/AAP

Large-scale solar installations can present some challenges for urban planning. For instance, mirrors can cause problems with glare, or even damage if they were misaligned (problems thus far have been in solar thermal plants). Maintenance vehicles may increase traffic in neighbourhoods. Installing solar panels could cause temporary problems with noise and lighting. And views could potentially be disrupted if adjoining residents overlook a large-scale solar installation.

But not all of these impacts would be long-term, and they can all potentially be managed through planning approval, permitting processes and development conditions. Installing screens or trees can improve views, for instance. Glare is a potential problem but again can be managed via screening (at the site or on overlooking buildings) or protective films on the panels.

The issue with the proposed solar farm in Fremantle is the fact it’s planned atop a former landfill site, known to contain harmful substances including asbestos, hydrocarbons and heavy metals. Unless carefully managed, construction of the solar farm could disturb these materials and potentially expose nearby residents to health impacts.

Most state environmental protection agencies recognise risks if the use of potentially contaminated land is to be changed, and have developed stringent guidelines for landfill management. 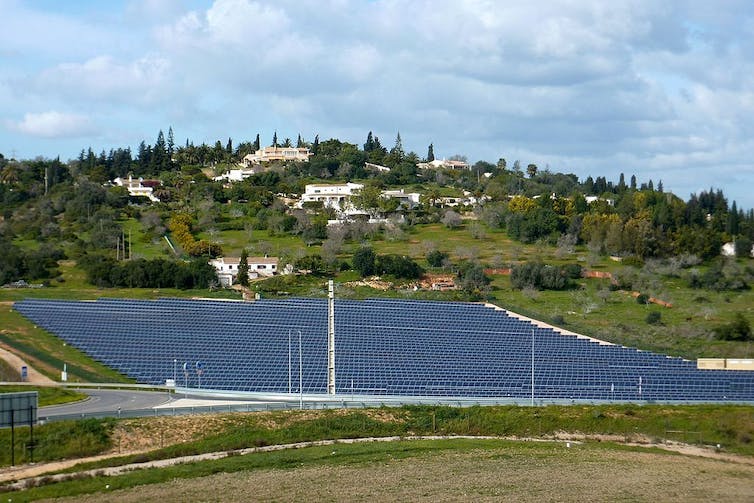 The Algarve Lagos solar farm in Portugal shows how empty land in cities can be used to host energy efficiency platforms. Wikimedia Commons

The City of Fremantle has approved the proposed development, subject to the preparation of a site management plan among other conditions. Depending on site management, and the characteristics of surrounding neighbourhoods, poorly managed big solar on landfill sites could become an environmental justice issue. From this perspective, residents’ concerns are understandable, and the City of Fremantle will need to ensure it carefully monitors construction.

It is reasonable to expect that cities will increasingly host large-scale solar installations. With careful site selection and management, the multiple benefits of clean energy can accrue to urban residents. Otherwise leftover or marginal land can derive an economic return.

Of course care will need to be taken to minimise potential habitat loss or off site impacts such as visual intrusion, noise, and glare. But solar farms also have the potential to provide new habitats both via physical infrastructure (sites for nesting) and as part of site rehabilitation and management.