If an insect is flying in a car while the car is moving, does the insect have to move along with the car at the same speed? – Sarah, age 12, Strathfield.

Imagine that as you get into a car, an insect flies in with you.

When the car starts to move, the force (push) of the seat makes you move with the car. This is only needed while the car is speeding up (accelerating). Once the car is at steady speed, no push is needed anymore.

If the road is very smooth, you can only tell that you’re moving by looking out of the window.

If you throw a ball straight up inside the car, it goes up and comes down. The motion from your point of view is no different than if the car wasn’t moving at all. The ball does not get “left behind” by the car. (But please don’t throw balls in a moving car!)

Read more: Curious Kids: Why do our ears pop?

This is because everything in the car has been accelerated (sped up) to the same speed – you, the ball, the air and the insect.

Try this: make a small pendulum by tying an object to a piece of string. While the car is speeding up you will see that it hangs at an angle, with the string pulling the object forward to make it speed up.

Now back to the insect. Imagine the insect flew in and landed on the seat next to you. The seat pulls it forwards with the car. This pull is the friction force of the seat on the insect. It speeds up as the car speeds up.

But once the car is at steady speed, the insect doesn’t need to be pulled along any more, and it won’t be able to tell that the car is moving. It can fly around just as if it were in the room of a house. It does not have to fly forwards to keep up with the car.

Just like the pendulum, it doesn’t need a force to push or pull it forwards. (But it does have to hover, or it will fall down.)

But what if the insect flies into the car and doesn’t land?

This is because insects are very light, so air has a big effect on them. The air in the car is pushed forwards by the car, and the air pushes the insect forwards. This push is called air resistance or drag. This push would probably be enough for a mosquito, but not a Christmas beetle. 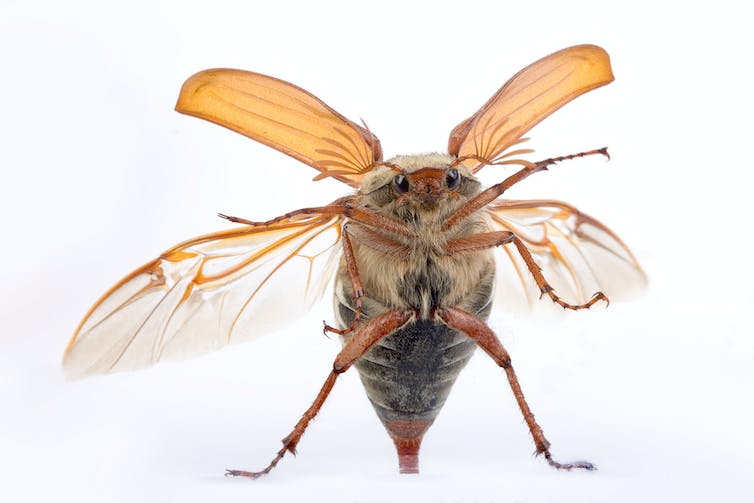 Christmas beetles are a lot bigger than mosquitoes! Shutterstock

So if the insect wants to stay right in front of your nose, it must fly forwards just a little bit when the car is speeding up. But when the car is at constant speed it needs only to hover.