Verbal and physical violence shapes the daily experiences of girls and women in cities. A recent analysis showed that women in Melbourne face habitual sexual harassment in public space and feel unsafe, particularly in the evenings.

Many commentators have framed the problem of violence against women perpetrated by men as being the result of toxic masculinity, defined by male entitlement and abuse of power. While this goes some way to identifying and labelling the problem, comparatively less work has been done to explore its underlying factors.

Read more: To design safer parks for women, city planners must listen to their stories

My forthcoming book New Demagogues: Populism, Religion and Masculinity, explores what I term “ideological masculinity”. Men who subscribe to this ideology believe that women’s empowerment has left them victimised and discriminated against.

They play out their anger and resentment through violent acts, justifying these as merely reclaiming what they believe is rightfully theirs. From online abuse to violence against women in public places, ideological masculinity is emerging as a form of violent extremism.

Ideological masculinity is radical. It seeks to promote a return to a perceived period of male supremacy, now “lost” to women’s rights and self-effacing men (referred to by some members of the alt-right movement as “beta cucks”).

And we see it played out through a broad sweep of misogynistic actions. They range from a disparaging remark about a female politician’s sex life to vandalising the memorial site of Eurydice Dixon to the murder of one’s own children to punish an estranged wife.

Some instances of violence, such as the murder of Eurydice Dixon in a Melbourne park have been, explicitly linked with gendered violence against women. But other aggressive acts that haven’t been committed directly against women can still be traced to a male disaffection with the opposite sex. 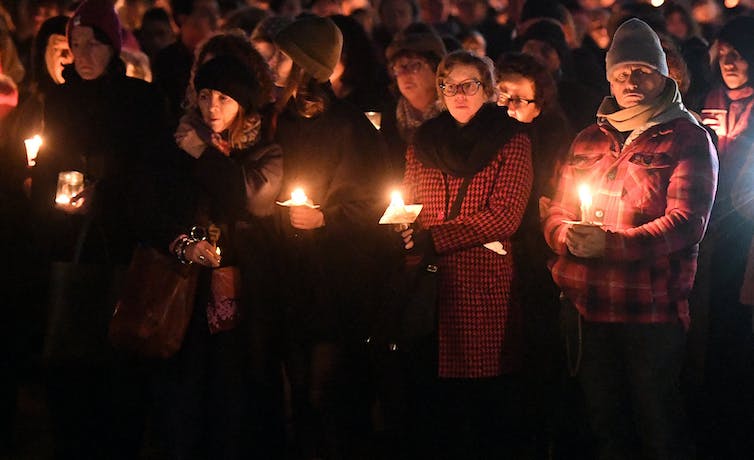 Alek Minassian, the driver charged with killing ten people in Toronto in April, was allegedly part of the so-called “incel” movement. A shortening of “involuntary celibates”, this group claim they struggle to find a romantic partner in a world where more women are demanding respect and equality. Others call for the death of feminists and incite violence against women.

A post on Minassian’s Facebook before his attack praised Elliot Rodger, the gunman who killed six students at the University of California in 2014. In a video, Rodger had called his planned attack “retribution” for the women who rejected him and for “all you men for living a better life than me”.

It has been reported that some men feel they have been left behind by the “new economy”, experiencing a deep resentment that has been capitalised on by politicians.

The reduced demand for manual labour has, the argument goes, undermined the importance of traditional masculinity, grounded in manual skills and bodily toughness. As economist Guy Standing has noted, anger, anxiety and alienation have replaced traditional working-class notions of masculinity bound up in self-reliance, strength and the ability to provide for one’s family.

This phenomenon isn’t the sole domain of working class men though. Some white collar men who find themselves in precarious contract based work, while women enter the professional workforce in greater numbers, are also experiencing resentment.

Social media has acted as a force multiplier for the men disgruntled with the decline of what they perceive masculinity to be. Disparate and often isolated figures feed off one another in forums such as 4Chan and Reddit, the birthplace of movements such as “neomasculinity” and the “incels”.

A subsection of the incel movement subscribes to the idea of the “incel rebellion”, which advocates terrorism against women.

In Australia, a “terrorist act” is defined as an action or threat that includes the intention to advance a political, religious or ideological cause; and causes one in a list of specified harms, including death, serious injury, or serious property damage. This, I’d argue, makes violence against women on the basis of ideological masculinity a form of terrorism.