Footage of 12 boys trapped in a cave system in Thailand has inundated our screens in recent days.

An international rescue effort is under way, which includes a team of specialists sent by the Australian government to assist with the safe recovery of the young soccer team. Highlighting the gravity of the situation, a former Thai Navy diver has died after running out of oxygen during rescue efforts.

This is without doubt a frightening situation for the boys and their families. It’s no surprise the situation has received global media attention. Though it does raise some interesting questions about how we extend empathy and concern to people we don’t know.

Why does this tragedy capture the world’s attention, when more long-term issues such as children in detention don’t to the same extent? Research from moral psychology can help us to understand this.

A picture is worth a thousand words

A key reason is simply that we can see the Thai soccer team. We’re watching the rescue effort play out, and we can see the emotions of the boys and their families. 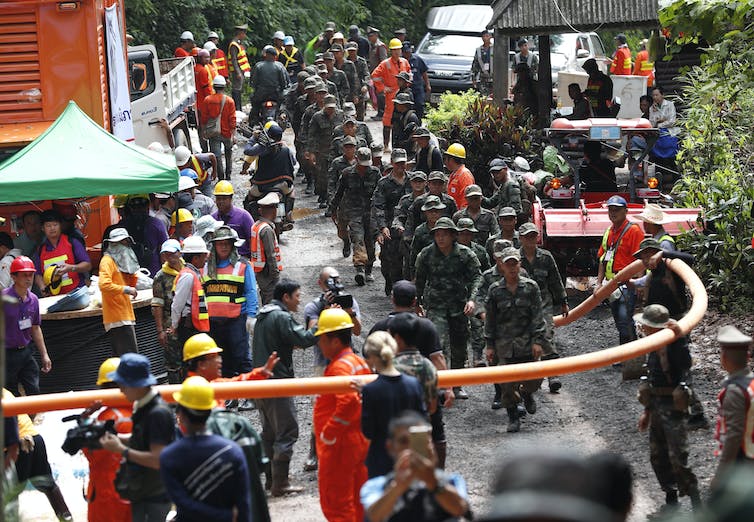 Thai soldiers walk as rescuers carry drainpipe while heading to the cave during the ongoing rescue operations for the child soccer team. RUNGROJ YONGRIT/AAP

We have seen this kind of viral, blanket coverage of tragic incidents recently. For example, the horrific scenes of children fighting for their lives after the 2017 chemical weapon attacks in Syria. Or the striking image that emerged in June of a small Honduran girl crying as her mother is detained by officials at the US-Mexico border.

By contrast, issues that are arguably no less frightening don’t always generate the same outpouring of concern and sympathy. For example, the more than 200 children held in detention on Nauru and throughout the Australian mainland.

This isn’t to suggest the Australian government shouldn’t aid in international rescue efforts, but we should be equally concerned about the far greater number of children being held indefinitely in Australian detention.

The fact is we have very little access to images of children in detention, as media access to Manus Island and Nauru is heavily restricted. For example, journalists face substantial obstacles if they want to visit our offshore detention centres, and in 2016 the Australian government threatened health-care workers with jail time if they spoke about the conditions they encountered on Nauru and Manus.

We simply aren’t permitted to view the plight of child refugees, and we’re much less likely to experience an empathic response if we can’t see them.

The recent outcry caused by the dramatic footage aboard an Australian live export ship illustrates this perfectly. Most of us would be aware to some extent live export is a cruel practice. But it isn’t until the footage forces us to confront the realities that we create enough momentum to discuss meaningful change.

The perspective we take also makes a huge difference. If we can easily draw comparisons between ourselves and those in need we’re more likely to extend concern and empathy.

And it’s far easier to extend sympathy to a situation that, one way or another, will reach an end.

Ongoing humanitarian issues such as asylum seekers or food shortages on the African continent feel like immense challenges often placed in the too hard basket. Therefore, these issues fade away in the face of what we consider more pressing matters with more straightforward resolutions.

Read more: Natural hazard risk: is it just going to get worse or can we do something about it?

The labels we attach are also crucial in determining our response.

For example, in 2016, then prime minister, Tony Abbott referred to asylum seekers as an invading force.

This sort of language is incredibly damaging, because when trying to make sense of a moral injustice we immediately look to identify both a victim and a villain. Suffering without a villain doesn’t always make sense to us – though the villains we choose are often subjective.

There is some fascinating research demonstrating this. For example, throughout the US, belief in God is highest in states where citizens experience the greatest amount of suffering – infant mortality, cancer deaths, natural disasters. This relationship holds after controlling for a range of alternative explanations, such as income and education. God is perceived to be the “villain” responsible for all this senseless suffering.

Read more: Response to natural disasters like Harvey could be helped with game theory

It’s impossible to label those suffering at the hands of a chemical attack as anything but victims. However, if we perceive asylum seekers as wrongdoers trying to steal some sort of unfair advantage, we’re far less likely to think of them as victims requiring our compassion, meaning it’s far easier to cast them out of our moral circle.

Do we have a moral responsibility to think differently?

Of course we should have sympathy for the soccer team trapped in the cave. But no matter the outcome, the story will disappear from our screens as the next pressing crisis arises.

We should ensure the reality of longer-term problems doesn’t also disappear, having fallen victim to the failings of our moral cognition.