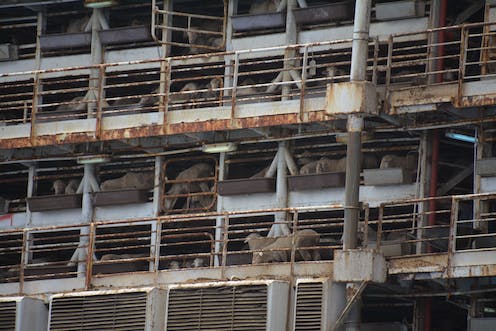 The controversial live sheep trade has been dealt a fresh blow with the Israeli government giving support to a bill that would phase out the importation of animals from Australia and Europe for slaughter.

Israeli Prime Minister Benjamin Netanyahu, whose wife has strongly opposed the live sheep trade and made a personal appeal on the issue to Lucy Turnbull, said on Facebook:

We approved at the Ministerial Committee for Legislation the bill to stop live transports to Israel. It’s our duty to act and correct this enormous suffering caused to animals.

The legislative effort has been led by Knesset member Miki Zohar (Likud party), together with other members from different parties and both sides of politics. A total of 28 members (out of 120) have signed the bill or similar ones.

Zohar said the bill demonstrates the “values” of Israel. He said it would reduce live sheep and cattle transports, while increasing the tax-free import of fresh meat and encouraging local production.

The bill proposes that the importation of live animals for slaughter be phased out gradually. In the first stage, there would be quotas fixed by the agriculture minister. The 2019 quota would not exceed 75% of the number of animals imported in 2017. The quota would then be reduced by 25% annually, and within three years, live imports would be phased out entirely.

The explanatory note to the bill says:

The animals are imported from Australia and Europe in long sea journeys that could last for weeks. During the journeys the animals are kept in high stocking density, covered in faeces, and suffer from heat stress, from rough seas and from other severe damages.

Many of them get sick and many do not survive the journey.

Scientists and professional committees in Israel and worldwide all share the position that transport of live animals should be avoided when possible, the length of the voyages should be as short as possible and live transport should be substituted with meat trade.

It further states that the amount of fresh meat imported to Israel is expected to rise in the next few years due to tax policy changes.

Australian live sheep exports to Israel are relatively small compared with other key Middle East markets, but the strong stand by the Israeli government is significant, especially given the trade’s current problems. An Israeli phase-out could also impact the commercial viability of continued exports to Jordan, as ships routinely unload animals in both countries.

The sheep trade is in hiatus at the moment, with no animals being shipped out after the licence of Australia’s biggest exporter, Emanuel Exports, was suspended last month “pending a full review of the company’s response to a show-cause notice” as to why its licence should not be cancelled.

The Israeli bill was drafted in collaboration with Israeli animal rights groups. Last week, the groups released a survey showing overwhelming public support for the bill.

Sara Netanyahu congratulated the government “for the approval of the humane and moral bill”.

Minister of Public Security Gilad Erdan also welcomed the government’s support for the bill, saying this was “a cause that I have been leading since I served as the minister of the environment. Transporting animals to Israel involves enormous suffering, and we must act to prevent this unnecessary suffering while there is an alternative that causes less pain and suffering to the animals. It’s a moral duty”.

Lyn White from Animals Australia applauded the move, as well:

Israel has always placed great priority on animal welfare, so it is tremendous to see the Netanyahu government respond to community concerns and support an end to live imports.

The strong public support in Israel for an end to live export is reflected here in Australia. We hope that the statements from Israeli politicians highlighting that we have a moral duty to protect animals from suffering will create pause for thought for politicians here.

Liberal backbencher Sussan Ley has a private member’s bill before parliament to phase out the live sheep trade to the Middle East and through the Persian Gulf or Red Sea within five years.