The initial stages of Victoria’s world first Puppy Farms and Pet Shops Act (PFPS Act) were implemented on Sunday in a bid to stamp out cruel puppy and kitten breeding practises.

The bill, like others across the world, bans commercial pet stores from selling puppies and kittens from breeders. Stores will now be required to source dogs and cats from registered animal pounds, animal shelters or community foster care organisations.

But what makes the Victorian legislation unique is a cap limiting the number of fertile females allowed by commercial breeders.

Read more: As selling pets online becomes normal, we need to regulate it

The new laws aim to eliminate pet shops as a point of sale of puppies from large scale breeders, and promote the adoption of homeless dogs and cats to prospective pet owners. Currently, 43,900 dogs die in Australia’s pounds each year.

The changes follow revelations about the cruel treatment of dogs and puppies raised by large scale breeders. Many issues have been brought to light by animal welfare organisation Oscar’s Law, who have campaigned rigorously for amendments to companion animal breeding laws in Victoria and across the country.

Victoria’s ban on pet shop sales of puppies and kittens is a strategy implemented across the globe.

The US state of California passed legislation banning the sale of “puppy mill” dogs in pet stores in October 2017, with Maryland adopting similar legislation in April 2018.

Like the Victorian model, pet stores in these US states will now be restricted to selling only shelter dogs and cats. The legislation relies on halting the sale of animals in pet stores to decrease demand for dogs from the puppy mill trade.

The 2020 introduction of a cap of 50 fertile females for breeders takes Victoria’s laws a step further. The cap will see the end of businesses operating with upward of 200 breeding dogs. While many animal advocacy groups have welcomed the introduction of a cap, others have accused the state Labor government of being influenced by “animal rights activists”.

During numerous parliamentary hearings, opponents including pet shop industry bodies, commercial dog breeders and coalition ministers, argued that there was “no scientific basis” for the cap of 50 fertile dogs. Opponents argued it would drive breeding “underground” and make it difficult for Victorians to access and afford specific in-demand dogs, including “designer dogs” such as Cavoodles. 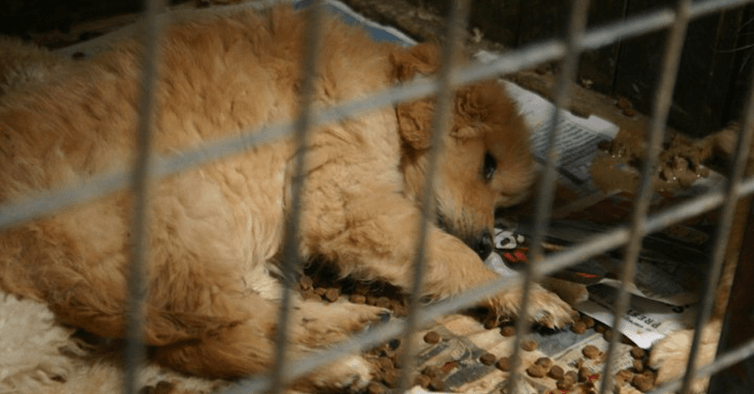 Caps on the number of breeding dogs allowed by businesses will put an end to industrial-scale breeding in poor conditions. Animal Liberation Victoria/AAP

There is community consensus that ending puppy farming is necessary. A 2013 poll conducted by the Animal Welfare League NSW found 80% of residents believed puppy farming should be stopped.

However, defining puppy farms is tricky. While the RSPCA defines a puppy farm as “an intensive dog breeding facility…that fail to meet the dog’s behavioural, social and/or physiological needs,” the definition does not reflect the conditions of many businesses affected by the cap.

My PhD research explores how Victoria’s dog-owning community understand their dog buying practices as being ethical. Survey data I have collected suggests messages from organisations such as the RSPCA and Oscar’s Law about “ethical” and “responsible” ways to buy a dog are often misunderstood or not followed by dog owners.

The RSPCA definition of a ‘puppy farm’ RSPCA/AAP

For example, while Oscar’s law drew attention to problems with large-scale breeding facilities, some dog owners indicated they were comfortable with purchasing a dog from a large-scale breeder, particularly if that breeder allowed them to meet the puppy’s parents or tour the facility.

Many respondents stated that they did not consider these places to be puppy farms, regularly labelling them as “good ethical breeders”. This is partly due to the fact that dog buyer’s guides, such as the RSPCA’S Smart Puppy and Dog Buyers Guide urges prospective pet owners to do just that (meet the parents, see where the puppy has lived).

In addition, various respondents directly voiced concerns about being able to identify “ethical” breeders from “unethical” breeders, indicating the process of buying a dog was “stressful,” and information “confusing” and “conflicting”.

My research highlights how understandings around responsible dog buying practices vary, as well as how distinguishing the “puppy farms” from “ethical breeders” is still a challenge for welfare organisations, legislators and dog owners.

In theory, the ongoing roll-out of Victoria’s legislation will address many of the anxieties over distinguishing “good” breeders from “bad” breeders. 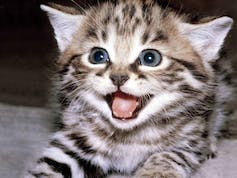 Victoria’s legislation will drastically change the lives of many pets across the state. https://en.wikipedia.org/wiki/File:Cute-kittens-12929201-1600-1200.jpg

While pet-loving communities worldwide are beginning to make efforts to stamp out cruel dog breeding trades and practices, measuring the outcome of Victoria’s policy - particularly the breeding dog cap - remains difficult. Overall, the long term impact of Victoria’s changes remains to be seen.