It is no secret people are living longer, thanks to advances in medical technology. Futurist Ray Kurzweil predicts we are approaching a point of breaking even – where for every year lived, science can extend lifespans by at least that much. And more than 80% of Kurzweil’s predictions have so far proved correct.

But length of life and quality of life are not the same thing. For good quality of life as one ages, there must be optimal retirement options. The default is to stay in one’s current home for as long as possible, or downsize. Some will settle into the quiet life of a retirement village on the urban fringes.

Read more: How can we best design housing for Australia's ageing population?

But a growing number of retirees who are leading a more active retirement, perhaps still working part-time, want to live closer to the bright lights of the city. It is here that the next generation of retirement living is becoming established in cities around Australia, New Zealand, Europe and the US.

Driving the trend are well-heeled baby boomers (those born between 1946 and 1964) who have been using technology at home and work for years. For some, technology has been integral to their lives. And it seems it might be integral to the future of retirement living.

The chair of the NSW inquiry into retirement villages, Kathryn Greiner, recently recommended integrating designated seniors’ apartments in medium or high-rise residential developments where people of all ages live. Experts have said such retirement communities are the “way of the future”.

But the future is already here, as greater numbers of vertical retirement communities in high-rise apartment buildings are being built in inner-urban areas around Australia. They offer high levels of luxury with ready access to the kinds of amenities inner-city dwellers have grown accustomed to.

High-rise retirement villages would typically be equipped with various smart technologies that connect with the larger technological infrastructure of the city.

Similar to luxury hotel suites, residents would have a spectrum of in-house services and entertainment options presented via internet-connected smart TVs. Multimedia suites would be there for augmented or virtual reality experiences – travel and education being among them. In-house cinemas would host movie nights. 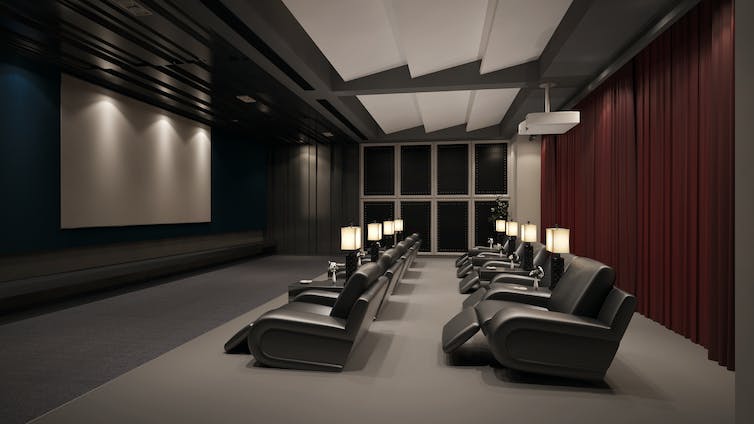 The future of retirement living has sophisticated in-house cinemas included. from www.shutterstock.com

The way we’re heading, technology-enabled, proactive health management will likely be built into the infrastructure of these retirement villages. It will allow people to stay healthy and live independently at an advanced age, forestalling the time when a move to aged care becomes necessary.

The health-maintenance technology available today means retirees hardly need to leave home for a checkup. Telehealth gives on-demand access to doctors via the internet. Visiting nurses have their role in looking after the elderly at home.

Then there are the dozens of smartphone apps that monitor vital signs, some of which send timely warnings before something becomes a problem.

And while high-rise living may not offer the same access to the outdoors for walking and exercise, technology has other options.

“Exergames” – video games that enable physical activity – are a segment of the computer game industry known to be beneficial to people of all ages, including the elderly. Exergames lend themselves well to vertical communities by not needing much space. They are played either alone or with friends in self-contained virtual environments. 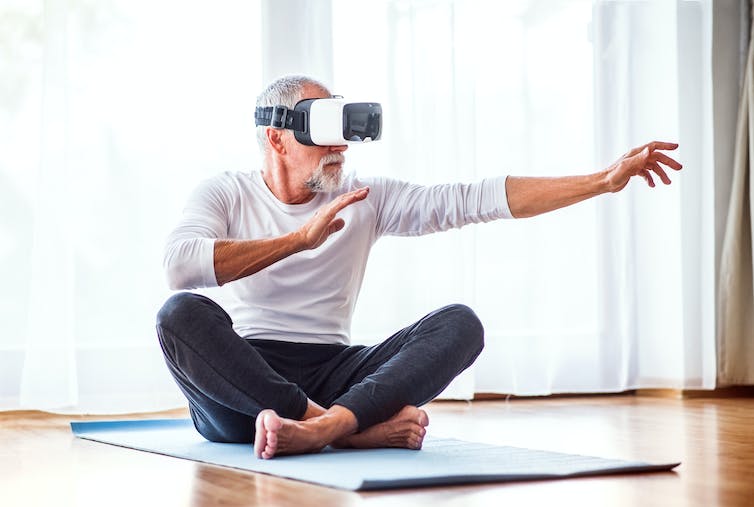 In the future, yoga can be practised in a self-contained, virtual environment. from www.shutterstock.com

Apart from the physical benefits of exercise, exergames have also been shown to improve mental alertness, balance and coordination, all of which contributes to fewer injuries common to the elderly, such as fractured hips from falling.

Read more: Why hip fractures in the elderly are often a death sentence

Good help is not hard to find now with assistive technologies like Google’s Duplex. These personal assistants fit right into the high-tech home and allow people, wherever they live, to stay independent for longer.

The assistant can keep your diary, make appointments over the phone, buy flowers and have them delivered, turn on the lights, call a taxi and more. Autonomy aids like this could delay the transition to aged care.

High-rise apartments are a thorny issue in suburban neighbourhoods, regardless of who is living in them. There are already some objections to high-rise aged-care facilities. But these mainly come from existing low-rise residents who are not happy to have any high-rise buildings in their neighbourhood.

Some are concerned that high-rise communities will lead to social isolation. Traffic congestion is also a concern.

When managed well in an architectural and town planning sense, vertical communities offer high-quality living while occupying a smaller urban footprint than a hundred detached dwellings. They can help reverse the urban sprawl of Australian cities, which are among the largest and least densely settled in the world. We love our big suburban houses, but they do consume vast tracts of countryside.

People want to live out their days in the freedom of their own home, not in an institution, no matter how benevolent. And it’s in the national interest to relieve pressure on the public health system. Emerging health-optimising technology and vertical communities can enable this. It’s a win-win.