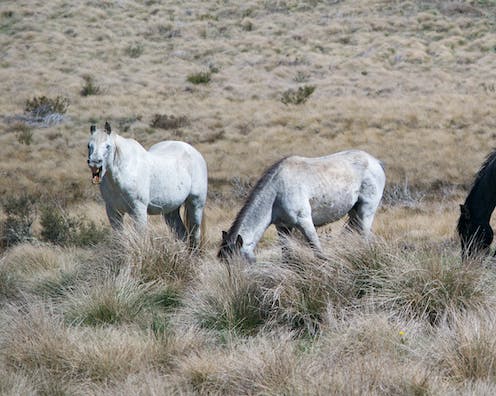 The New South Wales’ Deputy Premier John Barilaro was reported as saying the cultural significance of the brumbies needed to be recognised.

But the evidence regarding feral horse (brumby) impacts on the environment in the Australian alps makes it clear that large numbers of feral horses are incompatible with maintaining the ecological values of Kosciuszko National Park.

In a letter to the then premier Mike Baird in 2016, I and 40 other ecologists noted that feral horses have well documented impacts on streams and catchments:

In its report, Parks Victoria suggested that native mammals such as wallabies and kangaroos are also out-competed and driven away by feral horses.

The threat posed by feral horses to native species and communities is so great that the NSW Threatened Species Scientific Committee has released a preliminary determination to list feral horses as a key threatening process. This report demonstrates that feral horses have well established environmental impacts and that action to reduce this threat is now urgent.

What’s more, there may be no “safe level” of feral horse numbers, below which the environment can cope with the damage. In a new report for the Victorian government, the impacts of feral horses on the Bogong High Plains was found to be cumulative, meaning that the damage caused by even a small number of horses accumulates over time, because the rate of recovery in alpine conditions is extremely slow.

Contrary to the “brumby bill” which would leave thousands of feral horses in Kosciuszko National Park, and contrary to the draft management plan that would reduce feral horses down to 600 over 20 years, to prevent horse damage, all of the horses must be removed.

Removing all of the feral horses from Kosciuszko National Park is also a value judgement. NSW sets aside only 9.2% of its land in protected areas. That’s less than 10% where nature conservation has priority, and more than 90% where people and our livestock and crops take precedence. This is already an extreme compromise, and does not even reach international targets under the Convention on Biological Diversity to have 17% of land area in protected areas.

The brumby bill will worsen this already below-par compromise by reneging on commitments to protect Australian native species, and transforming our national park into a playground for escaped exotic livestock.

The bill proposes to move horses from sensitive areas into less sensitive parts of the national park. But this is likely to fail, for two reasons. First, there is no clear way that this could be achieved without great cost and horse suffering.

Trapping horses has been experimented with since 2008, with, on average, 450 horses removed from Kosciuszko each year, at a cost of more than A$1,000 per horse. This was from open woodland habitat with good road access. But many of the most sensitive environments are in the least accessible areas, such as the main Kosciuszko range.

Without culling, it is not clear how parks staff could remove horses from these areas. At best, it would be expensive because it would be so labour-intensive. It would require new infrastructure in remote areas (which is undesirable for several reasons), and could require mustering with helicopters, also very costly. Mustering, trapping and trucking horses have serious animal welfare concerns, making them a crueller alternative than culling.

Second, moving more horses into areas that are already overrun by these quadrupeds places the horse population at risk of ecological collapse. Horse populations can increase at 20% or more every year. There were 6,000 horses in Kosciuszko National Park in 2016, so there could be 8,600 by now, and a further 1,700 after the next breeding season.

By moving horses from one part of the park to another, the brumby bill will inevitably lead to unprecedented horse densities relative to the food available. There would be a real risk of mass horse starvation. By ignoring these basic ecological processes, the bill is likely to preside over more horse suffering than would be caused by a cull.

The proposed legislation is bad for horses, disastrous for the environment and, if relocations are actually implemented, extremely expensive. There are less cruel, cheaper, and more environmentally friendly solutions to this problem. Cull the horses in the national park (the least cruel of the range of viable methods), constrain brumby herds to the many private properties around the park to foster innovation in ecotourism, and invest in other environmentally friendly cultural activities to celebrate brumby culture, such as horse events outside the park, signs such as those around Victoria’s alpine huts, sculptures, poetry and movies.

This is the win-win solution we should be aiming for, not the reckless version on the table at the moment.