Australia is a continent defined by extremes, and recent decades have seen some extraordinary climate events. But droughts, floods, heatwaves, and fires have battered Australia for millennia. Are recent extreme events really worse than those in the past?

In a recent paper, we reconstructed 800 years of seasonal rainfall patterns across the Australian continent. Our new records show that parts of Northern Australia are wetter than ever before, and that major droughts of the late 20th and early 21st centuries in southern Australia are likely without precedent over the past 400 years.

This new knowledge gives us a clearer understanding of how droughts and flooding rains may be changing in the context of a rapidly warming world.

A history of drought

Australia has been shaped by floods, droughts, and blistering heat. How big and how intense these events were is poorly understood due to the limited historical and observational records.

Historical records provide rough estimates of the extent and intensity of droughts in parts of Australia since the late 1700s. For example, captains’ logbooks from ships anchored off of Sydney describe the Settlement Drought (1790-1793), which threatened the tenuous foothold of early European settlers in Australia. And farmers’ records describe the Goyder Line Drought (1861–1866) that occurred in areas north of the known arable lands of South Australia.

Observational weather records provide more detailed descriptions of climatic variability. However, systematic recording of weather in Australia only began in the late 19th century. Since then many parts of the continent have experienced prolonged wet periods and droughts. The most well known of these are the Federation drought (1895-1903), the World War II drought (1939-45), and the recent Millennium drought (1997-2009).

All three droughts were devastating to agriculture and the broader economy, but each was distinct in its spatial footprint, duration, and intensity. Importantly, these droughts also differed in seasonality.

For example, the Millennium drought, which was most severe in southwestern and southeastern Australia, was caused by poor rainfall during the cool season. In contrast, the Federation drought, which affected almost the entire continent, was predominantly due to rainfall declines during the warm season.

Although the historical and observational records provide a wealth of information about the frequency of wet and dry extremes, they provide only part of the picture. 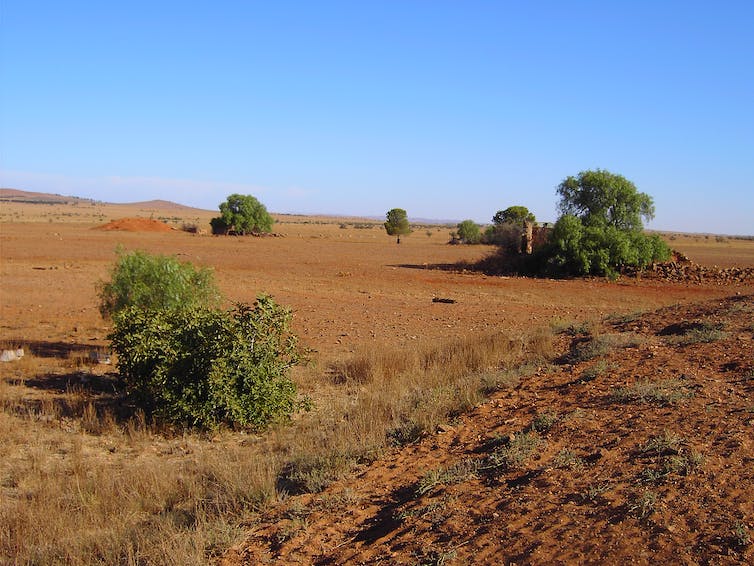 To understand possible trends in rainfall and assess the likelihood of prolonged droughts, we need to understand the long-term climatic context. For this, we need records that are much longer than existing observational and historical records.

Our new study used an extensive network of tree rings, ice cores, corals, and sediment records from across Australia and the adjacent Indian and Pacific Oceans to extend rainfall records across all of the major regions of Australia by between 400 and 800 years. Importantly, we did this for two seasons, the cool (April–September) season and warm (October–March) season, over eight large natural resource management regions spanning the Australian continent. This allows us to place recent observations of rainfall variability into a much longer context across the entire continent for the first time.

Seasonal rainfall for the past 400 years

Our reconstructions also highlight differences between recent extreme drought events and those in earlier centuries. For example, the Millennium Drought was larger in area and longer than any other drought in southern Australia over the last 400 years.

Our reconstruction also shows that the most intense droughts described in the historical records – the Settlement Drought (1790-93), Sturt’s Drought (1809–30), and the Goyder Line Drought (1861–66) – were limited to specific regions. The Settlement Drought appears to have affected only Australia’s eastern regions, whereas the Goyder Line Drought, which occurred north of the northernmost limit of arable lands in Southern Australia, primarily impacted central Australia and the far north.

Read more: Friday essay: recovering a narrative of place - stories in the time of climate change

These historical droughts varied widely in the area they covered, highlighting at a continental scale the spatial diversity of drought. This spatial variability has also recently been demonstrated for eastern Australia.

Our multi-century rainfall reconstruction complements the recent Climate Change in Australia report on future climate. By providing a clearer window into climates of the past online, we can better see how extremes of rainfall may affect Australia in the future.