Buzzword bingo arrived in the contemporary workplace in the early ’90s, as a way of ridiculing the prevalence of management-speak. To play it, employees prepare cards containing some of the more dreaded terms, then tick them off when their colleagues use them, which tends to be in meetings. 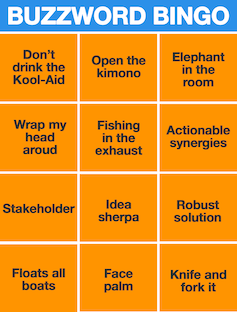 Author / The Conversation, CC BY-ND Many of the expressions on this bingo card are some of my least favourite. Still, they can be unpicked: an “idea sherpa” is an expert guide, to “knife and fork it” is to tackle a problem bit by bit, and “face palming” is the act of slapping one’s face as a mark of personal exasperation after making an idiotic comment. Some of the others are not just annoying or impossible to unpick, but also tasteless. Republican representative Jason Chaffetz reportedly urged Donald Trump to “open your kimono and show us everything” in a bid to see Trump’s tax returns in the run-up to the 2016 election. Not just horrifically icky, but ineffectual as well! Trump has still not released his returns. André Spicer, professor of organisational psychology at the University of London, attributes the birth of management-speak to a management-training program of gobbledygook launched by the telephone company Pacific Bell in California in 1984. But what defines a buzzword (“buzzword” is itself a buzzword), and when these become clichés, is unclear. As Justice Potter Stewart said of hardcore pornography in the obscenity lawsuit against film director Louis Malle, “I know it when I see it”. Read more: In defence of grammar pedantry Buzzwords are derided as “brainlessly upbeat language” by some, but praised by others for being time-tested and familiar, with “sturdy truthfulness and comforting ancientness”. Management professor Robert Kreitner calls buzzwords “the literary equivalent of Gresham’s Law” — “Bad money drives out good money” — because they drive out ideas and/or disguise a lack of them. Do buzzwords provide any benefits? Yes. Organisational jargon has its place in the professional arena. It can function as shorthand when used in a context shared by all involved. It can help newcomers to the organisational conversation to “enter the parlour” (as Kenneth Burke put it in 1941) and gain a sense of identity and comfort as part of a club. But it is also clear that buzzwords can obfuscate and deceive. From metaphor to cliché Buzzwords, like most of our language, originate in metaphor. In Metaphors We Live By, George Lakoff and Mark Johnson argue that metaphors are pervasive in everyday language, thought and action. A metaphor is a comparison in which a word or phrase in one domain of experience is applied to another domain. There’s no literal connection. Take, for example, “strategic staircase”. When a buzzword first makes its appearance it can evoke a powerful image. However, the buzzwords that “gain currency” (there’s a cliché for you) almost inevitably transform over time to become overworked and banal. In other words, they become clichés. Nouning and verbing, abhorred by many language mavens, are commonly relied on to express corporate clichés. Nouning occurs when verbs are used as nouns in expressions such “fulfil an ask” or “set up a fail”. Read more: When we needed a new word, Twitter gave us 'milkshake duck' Verbing occurs when nouns are used as verbs: “We are efforting to determine where the storm hit.” “Let’s kernelise the issues and tangibilise, bucketise and solutionise our problems.” Of course, the ugliest of the lot is “utilise”. And how about adjectiving, turning nouns into adjectives: presenting an impactful, planful, bandwidth talk? Plain language, please Ever since the origins of business-speak there have been those who have tried to combat these words. Despite many such efforts to mock or combat these corporate clichés by organisations such as the Local Government Association in the UK, which once outlawed 200 words and expressions such as “predictors of beaconicity”, they have proved to be annoyingly resilient. (Elsewhere, a New York bar, The Continental, which has happy hour seven days a week from 4pm to 7am, has banned the word “literally” in a bid to stop what it calls “Kardashianism”. Anyone using the word gets five minutes to finish their drink and leave. Anyone heard starting a sentence with “I literally” is ejected from the premises immediately.) If you’re curious about the meaning of any frightful examples of the organisational twaddle that you come across and need them “unsucked”, go to unsuck-it.com, where you’ll get mostly cynical translations of buzzwords. You can also use Houston PR’s Buzzsaw to measure the prevalence of corporate-speak in your writing. In his 2001 book, The War Against Cliche, Martin Amis makes a heartfelt plea: “All writing is a campaign against cliche. Not just cliches of the pen, but cliches of the mind and of the heart.” It’s a commendable aim for us all – but especially the corporate perpetrators of obfuscatory management-speak, who need “incentivising” to adopt plain language.