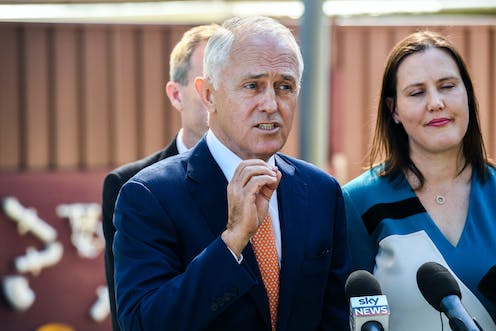 This was Malcolm Turnbull’s 30th successive Newspoll loss, matching Tony Abbott’s streak before Turnbull ousted him as Liberal leader and PM in September 2015. Famously, Turnbull justified moving against Abbott partly because of the Newspoll losses.

A big difference between the losing streaks of Turnbull and Abbott is that Abbott often trailed Shorten as better PM, while Turnbull has always led Shorten.

By 55-27, voters thought the 30 Newspoll losses demonstrated a failure of Turnbull’s leadership.

There was little change in Turnbull’s ratings on nine leaders’ attributes since early December. Shorten’s ratings increased six points on “arrogant” and four points on “has a vision for Australia”.

Other than the 30 Newspoll losses, this was not a good poll for Labor. Labor’s primary vote was down two points, and the total Labor/Greens vote fell back one point to 47%, after breaking out of a long run of 47% support last fortnight.

The Coalition has tended to do better under Turnbull when Parliament is not sitting. The fading of the Barnaby Joyce scandal and the big company tax cuts as issues may explain the Coalition’s gains.

Former Nielsen pollster John Stirton wrote in the Fairfax papers that the new Newspoll, which is conducted by Galaxy Research and uses online and robopolling methods, is far less volatile than the old Newspoll, a landline-based live phone poll. The new Newspoll started in mid-2015, and the Coalition’s chances of getting a tie by luck have been greatly reduced.

However, it is not just Newspoll that has the Coalition continuously behind. Until a 50-50 tie in Ipsos’ respondent-allocated preferencing method (see below), the Coalition had trailed in every poll conducted since September 2016, apart from a short-lived YouGov series that published polls in the second half of 2017.

Although both left-wing and far-right partisans would like to see Turnbull dumped, Turnbull has led Abbott by an overwhelming margin in every poll in which voters are asked to compare the two. In a June 2017 ReachTEL poll, voters favoured Turnbull over Abbott as Liberal leader by a 68-32 margin.

Ipsos is the only live phone pollster left in Australia; all other polls use robopolling or online methods. Ipsos gives the Greens higher support than other polls, at the expense of Labor.

By 49-40, voters supported cutting the company tax rate from 30% to 25% over the next ten years. Two weeks ago, ReachTEL had voters opposed to tax cuts for big companies by 56-29.

Primary votes in Essential are the same as in Newspoll, but Newspoll’s two party result is better for the Coalition. Newspoll is now assuming that One Nation preferences flow to the Coalition at about a 65% rate, consistent with the November 2017 Queensland election. Essential continues to assume the Coalition will win just half of One Nation’s preferences.

Shorten’s ratings on being a capable leader and good in a crisis increased five points since June 2017, and he had four-point increases on “visionary” and “more honest than most politicians”. Turnbull’s ratings dropped four points on “arrogant” and “aggressive”.

There were two double digit differences between the two leaders: Turnbull led by 15 points on “intelligent” and by 13 points on “out of touch”.

The Hungarian election was held on Sunday. There were a total of 199 seats, with 106 elected using first past the post, and the remaining 93 by proportional representation.