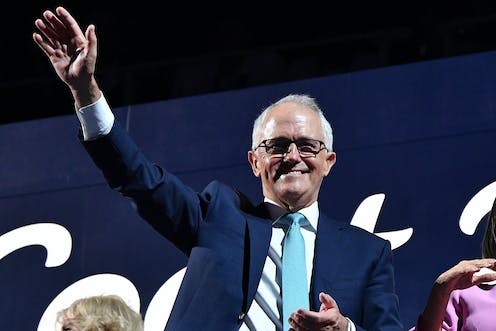 With his ill-advised reference back in 2015 to “30 losing Newspolls” in his successful challenge to Tony Abbott, Prime Minister Malcolm Turnbull made himself a hostage to fortune.

Foolishly, he tempted fate, and is now living with the consequences.

However, if Turnbull is to draw any comfort from a self-inflicted wound, he might consider the history of leaders who have endured bad polling and prevailed.

Newspoll didn’t exist in Robert Menzies’ day. But if it had, the founder of the party Turnbull leads might have been on course in election year 1954 for 50 losing Newspolls.

Menzies prevailed in that year thanks to the Labor “split” and the Petrov Affair, which involved the defection of a Russian spy at the height of the Cold War and on the eve of the 1954 poll.

Turnbull might also draw on Paul Keating’s example in the lead-up to the “unlosable” March 1993 election.

People forget the extent to which voters disliked Keating and the Labor Party after he became leader in December 1991 at the expense of the popular Bob Hawke. After the Keating takeover, the ALP’s primary vote was down in the mid-30s, compared with the Coalition‘s low 50s.

In an election-eve poll in 1993, Newspoll recorded Keating’s net approval rating at minus 25. Yet he prevailed for what he described as a victory for the “true believers”. This was after running the mother of all scare campaigns against John Hewson’s austerity “Fightback!” package.

In more recent memory, John Howard was deemed to be on political death row in the lead-up to the 2001 election. Labor under Kim Beazley led the Coalition 60-40 in its absolute trough in mid-2000, according to the Roy Morgan polling organisation.

After losing the formerly safe Liberal seat of Ryan in Queensland in a March 2001 byelection, Howard’s obituaries were being written. But by mid-2001, he had prevailed in a byelection in the Melbourne suburban seat of Aston. He went on to exploit the “Tampa affair”, in which he refused entry to refugees rescued at sea by a Norwegian freighter. He benefited politically from terrorist attacks on New York and Washington in September 2001.

Two months later, Howard fought a “khaki election”, in which Australia had joined the US in Afghanistan in combat against al-Qaeda and the Taliban. He won 82 seats to Labor’s 65. Under Beazley, Labor recorded its lowest primary vote since 1934.

The turnaround in the Coalition’s fortunes attests to the fickleness of public opinion polls taken mid-term, when real choices between parties and candidates are more snapshots than a definitive reading of the electorate’s mood.

Turnbull might give himself pause, however, if he reflects on more recently polling episodes. Julia Gillard’s ousting of Kevin Rudd in 2010 came on the back of polling that showed a slide in approval for Rudd himself.

But sometimes neglected is that Labor under Rudd was still leading the Coalition 52-48.

Gillard went on to lead Labor to a deadlocked election against Tony Abbott in August 2010. She formed a government with the support of independents.

Turnbull will have the recent bad memory of squandering a 14-seat margin, gained by Abbott in 2013, in last year’s federal election. This will long be regarded in conservative circles as an unnecessarily long and poorly-executed campaign.

Turnbull ended up retaining a one-seat majority. This resulted in a further diminution of his authority within his own party.

Where to now for Turnbull?

This brings us to the latest Newspoll and its lessons for Turnbull and poll-watchers in this next phase leading up to an election due by mid-2019.

If there is a lesson for Turnbull in the examples of his predecessors, it reinforces the point made above that polling between elections is an imprecise science.

On the basis of the latest Newspoll and a Fairfax/Ipsos poll at the weekend, the outlook for the prime minister is not all doom and gloom.

Both Newspoll and Ipsos reflected a slight improvement for the government. According to both polls, Labor is leading 52-48. This is close to the mean for polling over much of the past two years since the 2016 election, although better for the Coalition than recent polls.

For Turnbull, the Fairfax/Ipsos poll had some encouraging news on two separate fronts.

First, this poll found that when voters were asked to allocate preferences, the Coalition and Labor were running neck and neck, 50-50.

Second, voters overwhelmingly want Turnbull to remain leader. Some 74% of Coalition voters – and 62% of all voters – told the Fairfax/Ipsos survey they believed the Liberals should keep Turnbull.

These two elements should provide a modicum of encouragement for a beleaguered prime minister.

On the other hand, Turnbull can draw little satisfaction from the precipitous drop in his own approval ratings. When he ousted Abbott, he was sitting on a plus-38 approval: he is now down to the minus-mid-20s.

This is an astounding collapse in public esteem, and one that reflects a pervasive level of disappointment among voters in Turnbull’s leadership.

In an interesting sidebar to The Australian’s reporting of the latest Newspoll, a majority of focus group participants felt that Turnbull was “out of touch” with the electorate compared with Opposition Leader Bill Shorten. Shorten is comfortably leading in this important polling category.

You can be sure that in the run-up to the forthcoming election, the Coalition will launch the mother of all campaigns against Shorten in its efforts to further drive up his negative polling.

Whether this will work will depend on a range of imponderables. These include Turnbull’s own performance, the budget’s reception, and an end to damaging internal tensions in the Liberal Party itself. These and other events such as fallout from the actions of an unpredictable American presidency are all impossible to predict.

Turnbull is down, but he is not out, even if a slow drip-drip of negative polls will continue for the foreseeable future. He will now face a tiresome fortnightly reckoning with Newspoll beyond the current 30 negative polls benchmark.

To paraphrase a former Liberal leader, life for Malcolm Turnbull is unlikely to become much easier.