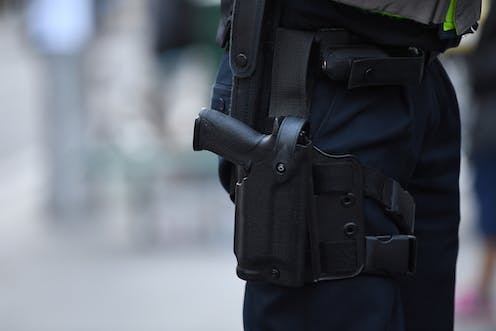 Part of the concern about any move to arm frontline police with military hardware is the rise of the 'warrior cop' phenomenon.AAP/James Ross

Heightened concerns over terrorism and claims of an escalation in gun-related crime have led to calls for Australian police to gain more widespread access to military-style rifles.

Two propositions need to be...

Heightened concerns over terrorism and claims of an escalation in gun-related crime have led to calls for Australian police to gain more widespread access to military-style rifles.

Two propositions need to be satisfied to support giving more police such weaponry. There must be both a credible threat and an identified deficiency in current police capabilities. To date, a convincing case has not been made for either.

The calls for military hardware

Military-style rifles are already available to some police in Australia on a limited basis in some jurisdictions.

Last week, Victoria Police flagged the possibility of arming its frontline officers with military-grade rifles. The reasoning put forward was that it would:

… enhance our abilities to respond to a major security incident or terrorism attack, we are currently scoping the potential use of a limited allocation of long-arm firearms to better support frontline police.

Yet last year, Chief Commissioner Graham Ashton ruled out such a move due to the look and feel of the weapons, and the confronting style of such policing.

The Victorian moves come soon after the Queensland Police Union called for military rifles to be issued to general duty officers. The union representative indicated the call was not sparked by any single incident, but was about “getting ahead of the game”.

The comments would seem to be at odds with the views of Queensland Police Commissioner Ian Stewart, who in 2016 released a report into fatal police shootings and recommended changes in how police officers are trained to emphasise using minimal force.

What is the current threat assessment?

Five of the terrorist attacks (including one planned attack) in Australia since 2014 have involved knifes as the primary weapon. Two involved shotguns; one involved a handgun. The two incidents involving shotguns were sieges in which specialist response teams were deployed. None of the incidents involved the use of military-style rifles.

One specialist risk consultancy has reported that firearms have decreased as a method of attack in Islamist extremist incidents in Western countries. Use of edged weapons (like swords, knives and machetes), vehicles, and bombs are becoming more prevalent.

Read more: Nice attack: how vulnerable are we to 'low-tech terror'?

The threat to police in Australia

An examination of the Australian National Police Honour rolls since 2008 to present shows six officers have been killed in attacks; all were shot. No details are provided as to the type of firearm used.

In at least one shooting – that of Queensland officer Brett Forte – the offender used a military-style weapon after he ambushed the officers who were pursuing him in police vehicles.

Based on publicly available information, it is unlikely the officers’ ability to access military-style weapons would have avoided the fatal shooting.

The problem with the ‘warrior cop’

Part of the concern about any move to arm frontline police with military hardware is the rise of the “warrior cop phenomenon” that’s been seen in the US.

The rise of the warrior cop has in part come about due to the increasing convergence of military and policing operational doctrines. There have been arguments made to demilitarise the US police, as the warrior cop mentality provides an illusive, dangerous and false sense of security.

There are also substantial differences between Australia and US, such as higher levels of gun ownership in the US and higher rates of firearm use in homicides. In Australia, restrictive gun ownership laws were introduced after the Port Arthur massacre in 1996. Since that time, the number of firearm-related homicides has decreased.

Read more: Charges in Justine Damond case a reminder of the dangers of a 'warrior cop' mentality

We must provide the best tools for policing

This is not to suggest we should deny police the ability to utilise new equipment that will improve their efficiency and effectiveness, and allow policing to be conducted safely for all.

For example, providing military-style weapons to police responding to a domestic violence incident in remote communities may be justifiable given the delay in getting specialist support to them, and the increased presence of long arms in a rural community.

In 1995, two New South Wales Police officers were killed while responding to a domestic incident. The offender used a high-powered rifle and the limited firepower of the police revolvers was identified as an issue. Their deaths led to major reforms, including the introduction of automatic pistols, bulletproof vests for first-response officers, improved radio coverage and equipment, and state-of-the-art tactical training for uniformed police.

Police also need to embrace new technology. For example, the use of anti-drone guns at this month’s Commonwealth Games, which can target a drone within a two kilometre radius, is an appropriate response to an emerging threat.

It is a balancing act of providing the right tools to police while ensuring we maintain the ethos of community policing and avoid going down the path of increasing militarisation that the US has.