This is an article from I’ve Always Wondered, a series where readers send in questions they’d like an expert to answer. Send your question to alwayswondered@theconversation.edu.au.

Can two chicks be born from a double-yolk egg? - Megan, Berry, NSW

Have you ever wondered how an egg gets to be that layered marvel of yolk inside a membrane, inside albumen inside more membranes and all topped off with a shell?

As wonderful (and complicated) as eggs are, it’s no surprise that they can come out a little odd from time to time. One of the most striking variations is the rare fertilised double-yolk – and yes, this can result in two chicks being born from the same egg.

Oddities like double-yolkers, as well as eggs with no shells, no yolk or even double shells, occur when something disrupts the usual egg-making process.

How eggs are made

Eggs depend on a really interesting organ called an oviduct.

First of all, a hen’s ovary produces an ovum. (That’s ovary as in singular – except in some raptors, the kiwi and a few other birds here and there, most birds have a single ovary.) The ovary looks like a cluster of tiny grapes, and if you care to dissect a bird, it’s located near the backbone, usually between or on top of the kidneys. 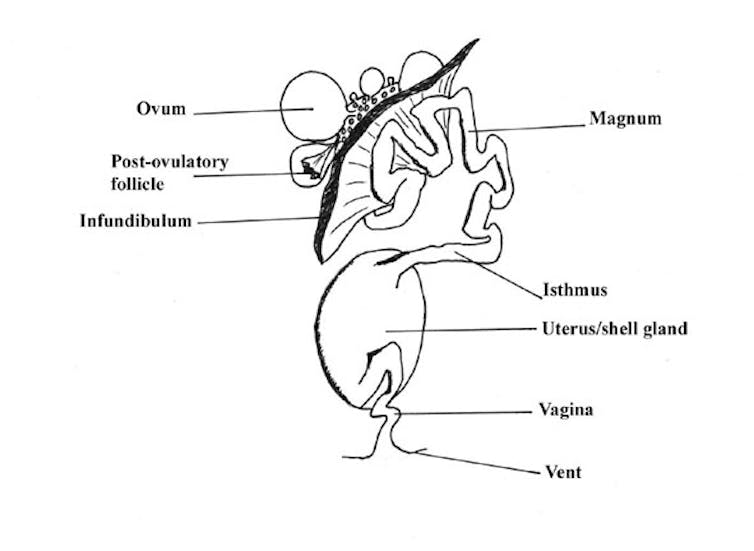 Left ovary and oviduct. The Poultry Club of Great Britain.

That ovum travels into the oviduct, which is a long and elastic tube that travels in a convoluted way from the ovary to the cloaca (the hole that birds defecate from). Muscle contractions move the ovum through the oviduct and first it enters a section where glandular secretions lay down the albumen (the white of the egg) in four layers.

Next, the egg enters the isthmus (a long narrow tube) of the oviduct, where two membranes are laid down: one to enclose the albumin and one to attach directly to the shell.

Then pigments are laid down. All the egg colours you might see, from random spots and speckles to uniform blue or brown, are actually the product of two colours. There’s buliverdin, which is responsible for blue-green hues, and protoporphyrin, which accounts for brownish reds, all mixed together to make the stunning array of bird’s eggs out there. 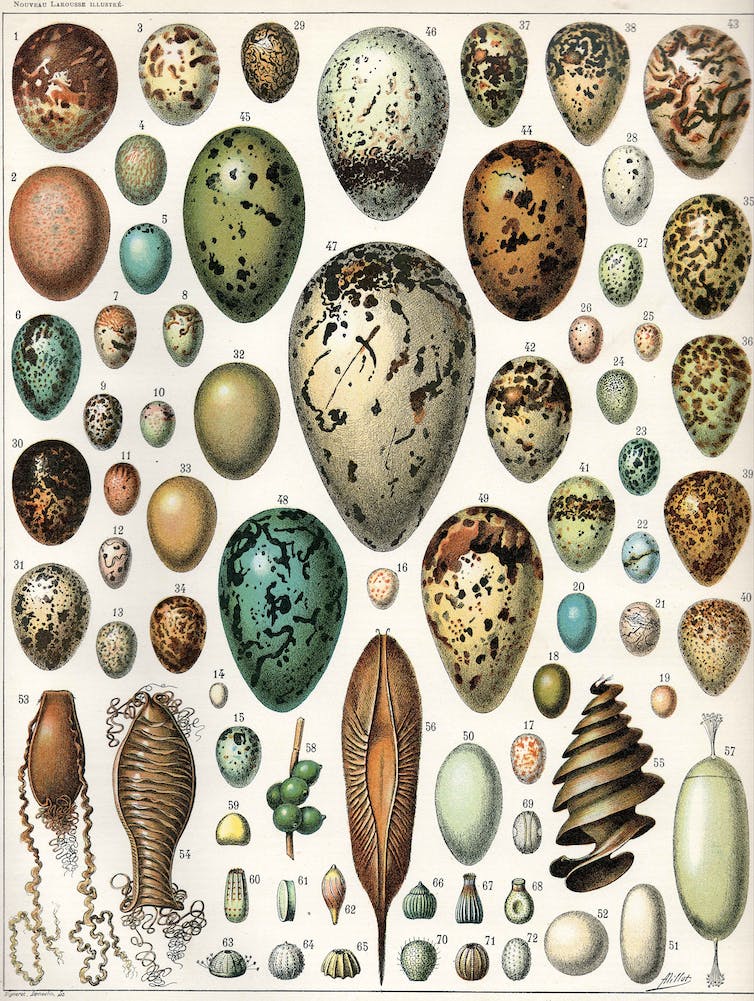 Finally the hard shell is laid down in the uterus, or shell gland, and consists of calcium carbonate in the form of crystals. Magnesium and phosphate are also included, but in small quantities. This whole process can take between 24 hours and a week depending on the species.

Even the smallest differences in chemical composition of the shell can change the appearance and strength of the shell. If something goes wrong here, then you get abnormal eggs. There are lots of abnormalities possible in eggs such as: