A new study suggests activation of a mother’s immune system during pregnancy, such as during an allergic response, may affect fetal brain development. This could influence the child’s susceptibility to psychiatric disorders in later life, such as autism, schizophrenia and attention deficit hyperactivity disorder.

Published in the Journal of Neuroscience, the study found a relationship between two proteins released by a mother’s immune system during the third trimester of pregnancy and the way a certain brain network involved in the above disorders developed in the infants.

Another study published last year suggested activation of the mother’s immune system during pregnancy could influence long-term child mental health and developmental disorders, specifically autism. These studies add to growing evidence linking a significant immune response - such as one that develops during flu or food poisoning – in pregnancy to negative outcomes for the woman’s offspring later in life.

Researchers have termed this exaggerated immune responses in pregnancy, which is potentially detrimental to the fetus, as “maternal immune activation” (MIA).

The immune system can be thought of as an army. When an infectious agent such as a virus or bacterium invades our body, it can result in illness or fever. Our immune system recognises these danger signals and mounts an attack of its own. This attack, known as the immune response, is carried out by immune molecules and cells that work to neutralise and eliminate threats.

Read more: Explainer: how does the immune system work?

In most situations, the immune response protects the body from illness. But it can also be negative in some cases, such as in autoimmune diseases like diabetes (type one), rheumatoid arthritis and multiple sclerosis. In diabetes, a misdirected immune response causes immune molecules to attack the pancreas and reduce insulin-producing cells. 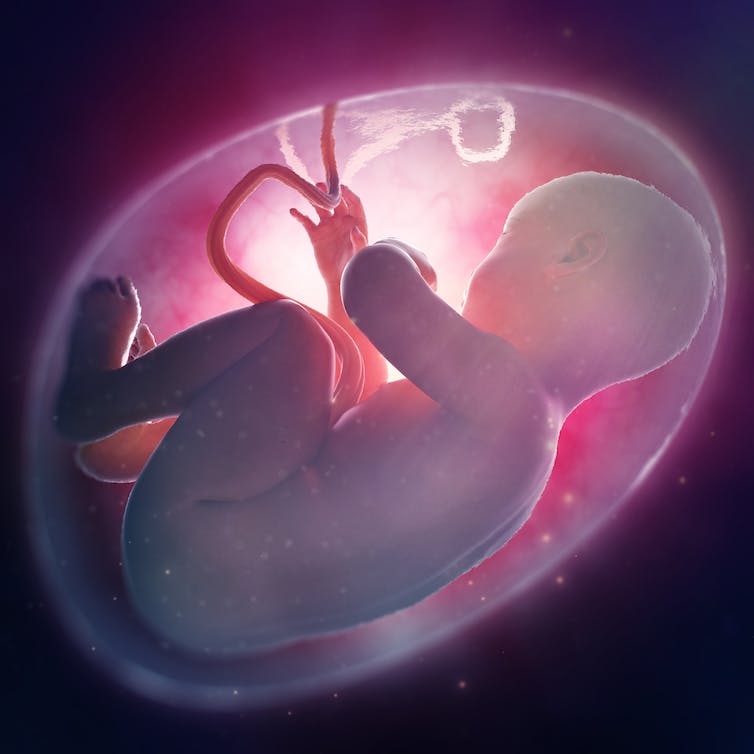 The womb environment is responsible for a baby’s healthy development. from shutterstock.com

It’s well established the womb environment is important for the baby’s healthy development. This environment is generally stable and well balanced, monitored by the many systems that support well-being, including the nervous and immune systems. When maternal immune activation occurs, this balance is believed to be disrupted.

Armies of activated immune molecules, such as cytokines, chemokines and specific antibodies, can increase and alter the internal womb environment. The elevated levels of cytokines and chemokines might interfere with the normal development of the baby, particularly the baby’s brain, and the nervous and immune systems.

Many animal studies, both in rodents and non-human primates, have shown that experimentally induced maternal immune activation causes developmental, behavioural and social deficits in offspring. For example, when pregnant mice are injected with a substance that triggers an immune response, the resulting pups show social impairment, repetitive behaviours and communication difficulties. These animal behaviours have been argued to be similar to those in human developmental disorders such as autism.

Studying maternal immune activation in humans is much more complicated. There is no ethical way to induce MIA in mothers to observe how it affects fetal development. All studies are retrospective and show a correlation between two things, which means showing MIA directly causes child development problems is difficult.

Read more: Clearing up confusion between correlation and causation

Population studies (in which mothers and their children are followed over time) show that autoimmune conditions and infections may result in a small increase in the rates of mental health and developmental disorders in children later in life. Our own study found children of mothers who had experienced allergic or asthmatic reactions during pregnancy had a greater severity of autistic symptoms.

Similarly, in developmental disorders such as autism, we know there are many causes and probably many types of autism. We do not have any biological markers, other than sequencing DNA, to help us identify the different types of autism or markers that help to guide different treatments.

But some families report a long history of immune or autoimmune problems. There are also many children whose symptoms are heavily influenced by immune insults, such as fevers and influenza. If we can identify the biological markers involved in the effects of maternal immune activation, we would be able to target therapies for this particular group of children.

We may also be able to unravel the intricacies of complicated disorders, such as autism or schizophrenia, by figuring out why certain treatments work in some patients but not others. This would open the possibilities of using targeted tests and therapies to detect or prevent neurodevelopmental disorders in the womb.