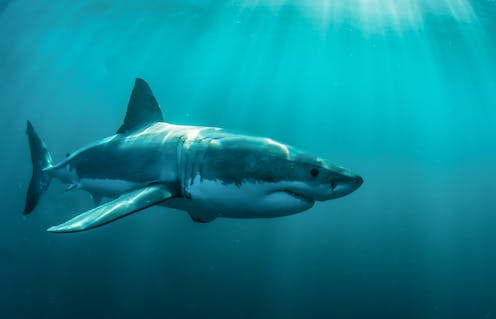 Are there more sharks in Australian waters than there used to be, and are interactions between humans and shark increasing? Some Australian politicians have claimed that to be the case.

Let’s look at the research.

The most reputable source for shark incident data in Australia is the Australian Shark Attack file, which is collated at Sydney’s Taronga Zoo.

The map below, created by The Conversation using data from the Australian Shark Attack File, shows incidents between sharks and humans in Australia between 1997 and 2017.

The number of recorded encounters between sharks and humans in Australia increased modestly between 1997 and 2017, but the reason for this is unclear. Over those two decades, the Australian population increased by 33%, but that alone doesn’t explain the increase in recorded shark encounters.

Correcting for the growth in human population in Australia, the data show that between 1997 and 2017:

Encounters between humans and sharks are extremely variable over time, and difficult to predict. The increases in recorded incidents between 1997 and 2017 are relatively small, and may be explained by factors not related to shark populations – such as increases in the reporting of shark encounters, or increasing beach use.

Are there more sharks off the Australian coast?

White Sharks (formerly Great White Sharks) are recorded as being responsible for 28 of the 36 fatal shark encounters in Australian waters between 1997 and 2017, and are the primary target of shark mitigation strategies of the Western Australian, New South Wales and Queensland governments.

So, has there been an increase in the number of White Sharks in Australian waters?

However, there is no evidence that White Sharks numbers are on the rise, either in Western Australia or along the Eastern coast. Despite targeted conservation efforts, the available research show stable or slightly declining numbers in these populations.

There are two distinct populations of White Sharks off Australian coasts – one to the west, and another to the east of Bass Strait, which separates Tasmania from mainland Australia. The eastern population includes New Zealand White Sharks.

Recent work by the CSIRO through the National Environmental Science Program’s Marine Biodiversity Hub using innovative DNA analysis has provided us with the most detailed and reliable estimates of population size we have for this species.

The CSIRO study shows there has been a slight decline in adult White Shark populations since the year 2000.

Including the available information about juvenile White Sharks, estimates of total size for the eastern population in 2017 was 5,460, with an uncertainty range of 2,909 to 12,802.

It’s difficult to detect population trends with White Sharks because of the length of time it takes juveniles to reach maturity – around 15 years. As protection of White Sharks began in the late 1990s, any changes in abundance would only be starting to appear in current populations.

How else can we measure White Shark populations?

The traditional way of measuring shark and fish populations is by examining catches in commercial fisheries over long time periods. By correcting for the level of fishing effort – which is done by looking at things like the number of nets, hooks and tows deployed by fishermen – scientists can assume that changes in the “catchability” of sharks is related to their abundance.

But due to the relative rarity of catches of White Sharks by fishing vessels, this approach is less reliable for this species than the more recent genetic studies conducted by the CSIRO and outlined above.

In New South Wales, there has been a cluster of shark bites in recent years. Data from the NSW Shark Meshing (Bather Protection) Program, managed by the NSW Department of Primary Industries, show a recent increase in White Sharks caught in nets placed near ocean beaches.

But when it comes to thinking about shark populations, we should not assume that these two facts are related. It’s important to remember that just because two things may correlate, it doesn’t mean that one caused the other.

These patterns could mean that the animals are coming closer to shore, rather than a population increase (or decrease).

Shark and human interactions: what factors are at play?

A 2016 paper examined six global shark bite “hotspots” – the United States, South Africa, Australia, Brazil, Reunion Island and the Bahamas – and concluded that when it comes to encounters between sharks and humans, there are a range of causes at play.

The authors also noted that shark encounters appear to happen in clusters. For example, 2009 saw a spike in shark encounters off the New South Wales coast. This coincided with an increase in beach attendance and beach rescues during what was an unusually warm summer for south-east Australia.

A 2011 paper highlighted the popularity of water sports as a factor contributing to increased human-shark encounters. More people are taking part in water sports, and improvements in wetsuit technology mean that people are in the water for longer throughout the year.

However, there is limited information on the number of people who use Australian beaches, so this explanation needs to be further studied.

It’s vital that any strategies put in place to reduce the number of unprovoked encounters between humans and sharks in Australian waters are carefully considered, and based on the best available research.