Carbonate sands, which accumulate over thousands of years from the breakdown of coral and other reef organisms, are the building material for the frameworks of coral reefs and shallow reef environments like lagoons, reef flats and coral sand cays.

But these sands are sensitive to the chemical make-up of sea water. As oceans absorb carbon dioxide, they acidify – and at a certain point, carbonate sands simply start to dissolve.

The world’s oceans have absorbed around one-third of human-emitted carbon dioxide.

For a coral reef to grow or be maintained, the rate of carbonate production (plus any external sediment supply) must be greater than the loss through physical, chemical and biological erosion, transport and dissolution. 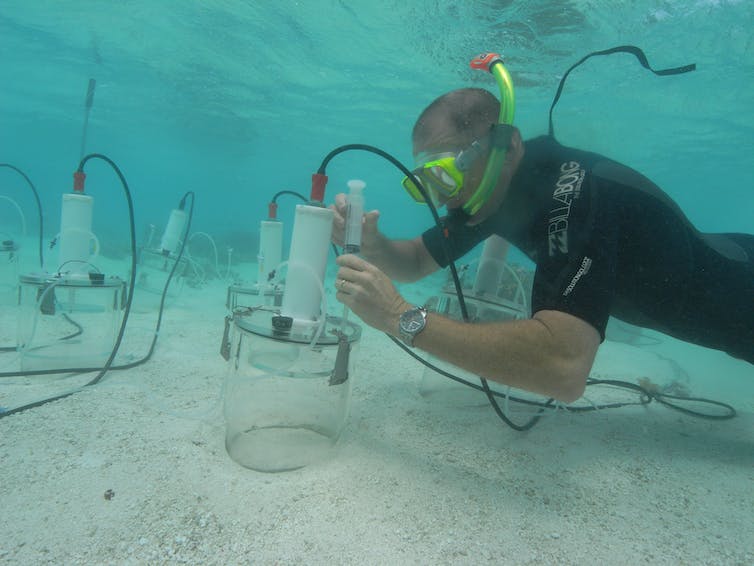 We measured the impact of acidity on carbonate sands by placing underwater chambers over coral reefs sands at Heron Island, Hawaii, Bermuda and Tetiaroa in the Pacific and Atlantic Oceans. Some of the chambers were then acidified to represent future ocean conditions.

The rate at which the sands dissolve was strongly related to the acidity of the overlying seawater, and was ten times more sensitive than coral growth to ocean acidification. In other words, ocean acidification will impact the dissolution of coral reef sands more than the growth of corals.

This probably reflects the corals’ ability to modify their environment and partially adjust to ocean acidification, whereas the dissolution of sands is a geochemical process that cannot adapt.

In contrast, carbonate sands in Tetiaroa are not dissolving under current ocean acidification because this site is almost pristine.

What will this mean for coral reefs?

Our modelling at 22 locations shows that net sand dissolution will vary for each reef. However, by the end of the century all but two reefs across the three ocean basins would on average experience net dissolution of the sands.

A transition to net sand dissolution will result in loss of material for building shallow reef habitats such as reef flats and lagoons and associated coral cays. What we don’t know is whether an entire reef will slowly erode or simply collapse, once the sediments become net dissolving, as the corals will still grow and create reef framework. Although they will most likely just slowly erode.

It may be possible to reduce the impact of ocean acidification on the dissolution of reef sands, by managing the impact of organic matter like algae at local and regional scales. This may provide some hope for some already disturbed reefs, but much more research on this topic is required.

Ultimately, the only way we can stop the oceans acidifying and the dissolving of coral reefs is concerted action to lower CO₂ emissions.