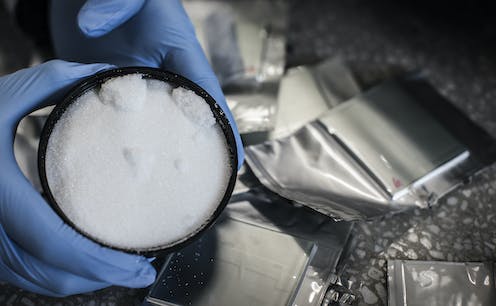 Since sodium is abundant, battery technology that uses it side-steps many of the issues associated with lithium batteries.Paul Jones/UOW, Author provided

Lithium-ion remains the most widespread battery technology in use today, thanks to the fact that products that use it are both portable and rechargeable. It powers everything from your smartphone...

Lithium-ion remains the most widespread battery technology in use today, thanks to the fact that products that use it are both portable and rechargeable. It powers everything from your smartphone to the “world’s biggest battery” in South Australia.

Demand for batteries is expected to accelerate in coming decades with the increase in deployment of electric vehicles and the need to store energy generated from renewable sources, such as solar photovoltaic panels. But rising concerns about mining practices and shortages in raw materials for lithium-ion batteries – as well as safety issues – have led to a search for alternative technologies.

Many of these technologies aren’t being developed to replace lithium-ion batteries in portable devices, rather they’re looking to take the pressure off by providing alternatives for large-scale, stationary energy storage.

Australian companies and universities are leading the way in developing innovative solutions, but the path to commercial success has its challenges.

In flow batteries the cathode and anode are liquids, rather than solid as in other batteries. The advantage of this is that the stored energy is directly related to the amount of liquid. That means if more energy is needed, bigger tanks can be easily fitted to the system. Also, flow batteries can be completely discharged without damage – a major advantage over other technologies.

Flow batteries have been receiving considerable attention and investment due to their inherent technical and safety advantages. A recent survey of 500 energy professionals saw 46% of respondents predict flow battery technology will soon become the dominant utility-scale battery energy storage method. 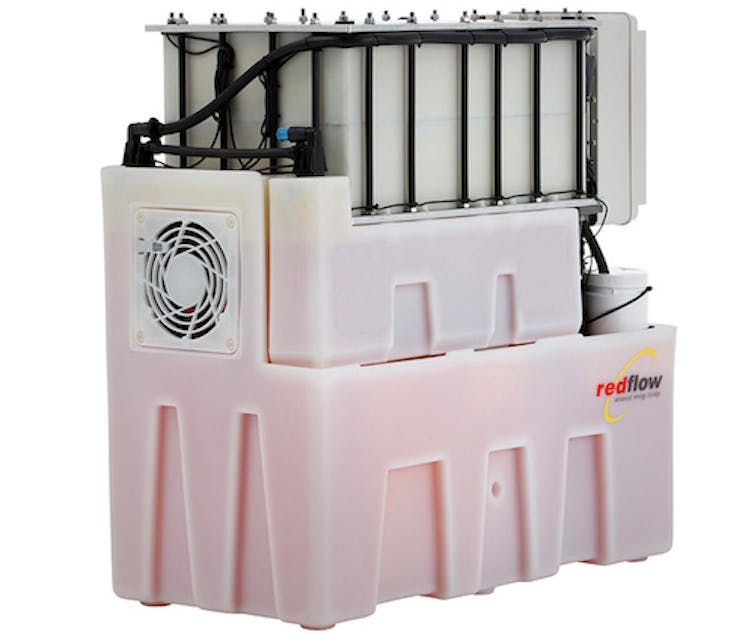 Energy storage company Ecoult has been formed around CSIRO-developed Ultrabattery technology – the combination of a lead-acid battery and a carbon ultracapacitor. One key advantage of this technology is that it is highly sustainable – essentially all components in the battery are recyclable. Ultrabatteries also address the issue of rate-dependent energy capacity, taking advantage of the ultracapacitor characteristics to allow high discharge (and charge) rates.

These batteries are showing excellent performance in grid-scale applications. Ecoult has also recently received funding to expand to South Asia and beyond.

Read more: Politically charged: do you know where your batteries come from?

Rechargeable batteries are considered to have reached their “end of life” when they can only be charged to 80% of their initial capacity. This makes sense for portable applications – a Tesla Model S would have a range of 341 km compared to the original 426 km. However, these batteries can still be used where reduced capacity is acceptable. 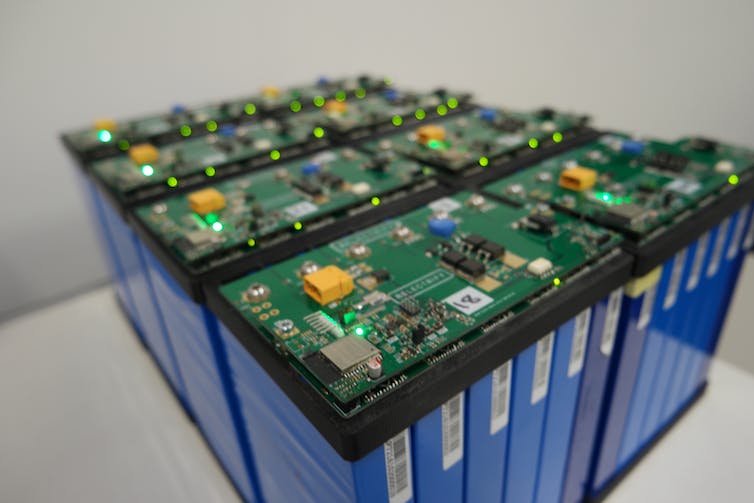 Energy can be stored in many forms – including as electrochemical, gravitational, and thermal energy. Thermal energy storage can be a highly efficient process, particularly when the sun is the energy source.

Renewable energy technology company Vast Solar has developed a thermal energy storage solution based on concentrated solar power (CSP). This technology gained attention in Australia with the announcement of the world’s largest CSP facility to be built in Port Augusta. CSP combines both energy generation and storage technologies to provide a complete and efficient solution.

1414 degrees is developing a technology for large-scale applications that stores energy as heat in molten silicon. This technology has the potential to demonstrate very high energy densities and efficiencies in applications where both heat and electricity are required. For example, in manufacturing facilities and shopping centres.

We’ve selected the sodium-ion chemistry for the S4 project because it sidesteps many of the raw materials issues associated with lithium-ion batteries. One of the main materials we use to manufacture our batteries is sodium chloride – better known as “table salt” – which is not only abundant, but also cheap.

We’ll be demonstrating the sodium-ion batteries in a residential application at University of Wollongong’s Illawarra Flame House and in an industrial application at Sydney Water’s Bondi Sewage Pumping Station.

Gelion, a spin-off company from the University of Sydney, is developing gel-based zinc-bromine batteries – similar to the Redflow battery technology. They are designed for use in residential and commercial applications.

The Gelion technology is claimed to have performance comparable with lithium-ion batteries, and the company has attracted significant funding to develop its product. Gelion is still in the early stages of commercialisation, however plans are in place for large-scale manufacturing by 2019.

While this paints a picture of a vibrant landscape of exciting new technologies, the path to commercialisation is challenging.

Not only does the product have to be designed and developed, but so does the manufacturing process, production facility and entire supply chain – which can cause issues bringing a product to market. Lithium-ion batteries have a 25 year headstart in these areas. Combine that with the consumer familiarity with lithium-ion, and it’s difficult for alternative technologies to gain traction.

Read more: How to make batteries that last (almost) forever

Some challenges, however, are intrinsic to the particular technology.

For example, Relectrify does not have control over the quality or history of the cells it uses for their energy storage – making it difficult to produce a consistent product. Likewise, 1414 degrees have engineering challenges working with very high temperatures.

Forecasts by academics, government officials, investors and tech billionaires all point to an explosion in the future demand for energy storage. While lithium-ion batteries will continue to play a large part, it is likely these innovative Australian technologies will become critical in ensuring energy demands are met.