The Conversation fact-checks claims made on Q&A, broadcast Mondays on the ABC at 9.35pm. Thank you to everyone who sent us quotes for checking via Twitter using hashtags #FactCheck and #QandA, on Facebook or by email.

The Turnbull government is seeking parliamentary support to cut the company tax rate to 25% over the coming decade, arguing that cutting the rate will increase business investment, drive jobs growth and lift wages in Australia.

During an episode of Q&A, Australian Chamber of Commerce and Industry chief executive James Pearson said small business owners would benefit from a company tax cut in Australia. He said it would “help them be profitable”, allowing them to grow their businesses, employ more people and pay those workers more.

Checking the source When asked for sources and comment to support James Pearson’s statement, a spokesperson for the Australian Chamber of Commerce and Industry provided The Conversation with the following graph. It draws on unpublished Australian Taxation Office data and relates to the 2014-15 income year: 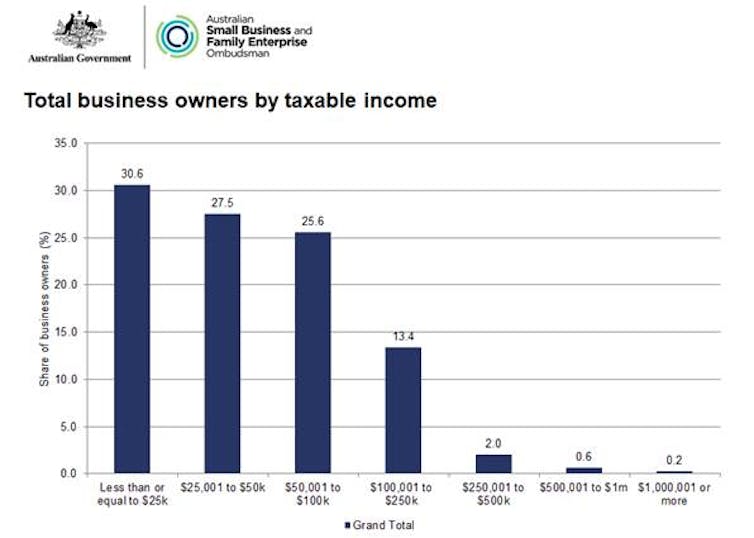 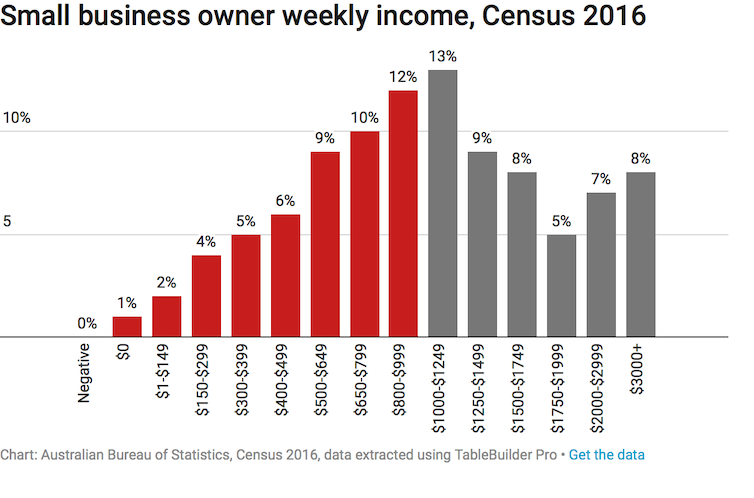 Putting Pearson’s statement in context In making his statement, Pearson described the financial struggles facing some small business owners. Pearson said these people “want a tax cut, they want a tax cut that will help them be profitable”. They’ll employ more people, they’ll offer longer hours, more people will have jobs, more people will be paid more. That’s how it works. Pearson added that when small business owners “see more productivity in their workforce, they can take the risk and grow their business”. But the reality is, when an Australian resident is trying to decide whether to invest in their small business, it’s their personal income tax rate, not the company tax rate, that really matters. Why? Because company tax paid by Australian businesses on income earned in Australia acts as a ‘pre-payment’ of personal income tax when that income is distributed to shareholders in the company (or the owners of the company) via franked dividend payments. Australian Taxation Office statistics show that in the 2014-15 financial year, more than 95% of dividends paid to Australian households were franked. The fact that Australian business owners can claim back any tax paid by their businesses when they lodge their personal tax returns makes their personal income tax rate the more relevant concern to the potential profitability of their business. In addition, Pearson argued that company tax cuts would lead to higher wages, a statement supported by the Australian Treasury. The Treasury modelling shows that the wage hike would be the result of greater foreign investment in Australia, leaving the owners of small businesses needing to pay higher wages to attract or retain workers. Small business owners who receive their income via franked dividends won’t receive any tax relief to cover this expense. So it’s possible that cuts to the company tax rate could hinder small businesses, rather than benefit them. – Janine Dixon and Jason Nassios Blind review This verdict finds a reasonable level of support from the available data. Research from the University of Western Sydney published in 2014, based on HILDA data and Australian Bureau of Statistics data, found that business owner households (as opposed to individuals) reported an average weekly income of $1,975 in 2010. That’s around $103,000 per household. If there were two adults per household, this would equate to $51,500 per person. Also, because the ‘average’ is skewed upwards by high income earners, 50% of earners would earn less than the average, which lends further support to Pearson’s statement. Information published by an American company called PayScale suggests the average salary for a small business owner/operator in Australia is around $67,000 per year, and the median salary is $62,000. If true, this would not be consistent with the claim that almost 60% of small business owners earn less than $50,000 per year. However, this information is based on a survey with a relatively small sample size. This source is a private sector consulting firm, and no other detail on their data source is provided. – Ross Guest

The Conversation FactCheck is accredited by the International Fact-Checking Network. The Conversation’s FactCheck unit is the first fact-checking team in Australia and one of the first worldwide to be accredited by the International Fact-Checking Network, an alliance of fact-checkers hosted at the Poynter Institute in the US. Read more here. Have you seen a “fact” worth checking? The Conversation’s FactCheck asks academic experts to test claims and see how true they are. We then ask a second academic to review an anonymous copy of the article. You can request a check at checkit@theconversation.edu.au. Please include the statement you would like us to check, the date it was made, and a link if possible.