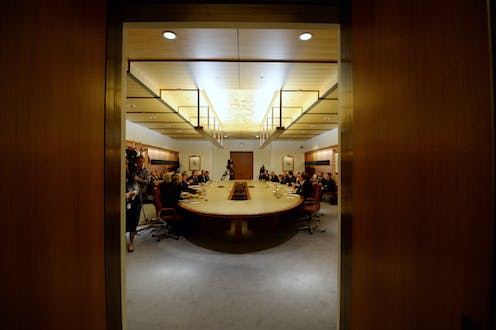 Cabinet confidentiality is important to ensure ministers are able to debate ideas before a decision is made public.AAP/Lukas Coch

Cabinet government requires confidentiality. Ministers have to be able to discuss alternative options to solve the problems they must manage. They have to able to express opinions and probe proposals. If they do not,...

Cabinet government requires confidentiality. Ministers have to be able to discuss alternative options to solve the problems they must manage. They have to able to express opinions and probe proposals. If they do not, then cabinet government becomes a rubber stamp for solutions devised elsewhere. Whether they always do argue matters less than the fact that the opportunity, and the expectation, is there.

When confidentiality is breached, when leaks provide the public with the range of views expressed and identify those who lost the argument, then ministers will tend to keep quiet, and prime ministers will take the debate somewhere else – into cabinet committees or into their own offices.

The principle of collective responsibility, which holds that all minsters are bound in public to support the decisions of the government, whether or not they were involved making it, can work only if the minsters (usually) had an opportunity to influence that decision.

That is just practical politics. Decisions are normally a matter of degree, not a case of right or wrong: how much or how little, this or that wording. The core may be easy, the difficulty is in the detail. The air of certainty, of governments arguing there is only one proper response – theirs – and all else is inadequate, is an artifice, a pretence that no-one should believe.

When decisions are actually made, information is often incomplete, time pressures acute, political consequences uncertain. In a neat phrase, governments “puzzle on the community’s behalf”. If the options were public, all would have advocates to whom no decision is right except the one they support; they would be even more outraged in that they knew government could have chosen their preferred option.

Given the ferocious misrepresentation that passes for political debate in this country, an opposition would pick one of the options not chosen, identify the losers and lampoon the decision. It is better for any form of competent government that the debates and calculations be kept confidential. For a time.

Governments are usually careful. There is a separate network for the lodging and management of cabinet documents. These days, it allows careful tracing of what happened in each case. Each submission has an identifier. (Lesson: if a cabinet paper is leaked, it is better to retype than photocopy.)

The Department of Prime Minister and Cabinet should be able to trace the history of these papers. As the process becomes more digitised, the possibility of filing cabinets of cabinet documents turning up will be reduced.

Does it matter if cabinet files, given to the ABC, become public? In terms of content, for most of the time for most of the papers, probably not. They will have long been overtaken by events. The problems of political sensitivity are different. If treasurers, for instance, lose an argument in cabinet and then properly adopt the agreed line in public, and the divisions in cabinet become known, they will be accused of failing to manage the economy, of not fighting enough. If governments were to make a habit of releasing the papers of their predecessors, in order to show how divided they were, governments would simply stop keeping records. There are good reasons for confidentiality.

So in this case there are two issues. First, how did this set of papers get locked in a cabinet that was then sold without checking the contents? The papers should have been returned to the cabinet office. They are the rules and for good reasons. They were not followed. The filing cabinet should have been checked. That is carelessness, slack, silly, lazy, incompetent, bad practice: all those pejoratives can legitimately be applied. But not malice, or they would not have been sitting there for years.

The second issue is what should have been done about it. When a cabinet document is leaked it makes a story – a rare insight into how cabinet government works. The release of a mass of papers is wrong, but potentially can be fascinating, a voyeuristic peephole into government. Think of the Pentagon Papers or WikiLeaks.

But they were designed to damage and undermine the government. This was happenstance. The use of the papers by the ABC seems to have been random: what made a headline or shocked, rather than asking what it tells us about the way we are governed. That requires more work, and they probably were a bit uneasy and aware that time would be limited once knowledge of the filing cabinets was public. The story was more about the filing cabinets than the cabinet papers, about the carelessness rather than the content.

In practice, most cabinet papers soon reach a use-by date. They are dull, time-specific, advising in long-forgotten particular circumstances about what may seem, in retrospect, minor incidents. In terms of content, rather than political sensitivity, most cabinet papers could be released within five years. Only a few would still matter.

In the 1980s, I wrote a study of Malcolm Fraser as prime minister. I started in 1984, a year after he lost office. Following the British practice of allowing prime ministers and minsters access to the papers they saw in government when they wanted to write their memoirs, he gave me access to all the cabinet papers of his administration.

In this case, he chose to delegate rather than refresh his memory. The papers were fascinating, detailed, voluminous and mostly unlikely to cause a stir. By the time the book was finished, most of his ministers had left office – the one big exception being John Howard. So while cabinet documents may contain the occasional nugget, most are routine, just as most government is routine.

We could still be a little more open. The New Zealand prime minster has a press briefing after each cabinet to tell the press the main conclusions of the meeting: selective but informative.

Even the Standing Committee of the State Council in China, known as China’s cabinet, releases a list of the items discussed in their weekly meeting; not everything, but more that the Australian public gets. We still need to balance a legitimate desire for transparency with the need for free and thoughtful debate (or rather, the possibility of thoughtful debate).

We should be able to find a balance in managing a system that does not threaten the ability of journalists and academics to write about the procedures and debates in cabinet, but also prevents random acts of stupidity that fill a cabinet with cabinet papers, forget they are there, fail to return them and then sell the filing cabinets.