Scientists don’t usually get involved in politics. But they took to the streets in last April’s March for Science, spurred by what they saw as the Trump Administration’s aggressive eroding of their institutions.

Such demonstrations – including here in Australia – had never been seen before because it takes a lot to get modern scientists to risk their aura of neutrality.

Read more: Listen up! How to get your message across in just 60 seconds

But in her latest book, the Belgian philosopher of science Isabelle Stengers defends the right of scientists to be political, by which she simply means the requirement to be relevant. And as part of this, she argues a need for “slow science”.

I was recently tasked with translating her book, Une autre science est possible!, originally published in French in 2013. It’s now available in English as Another Science is Possible: A Manifesto for Slow Science. 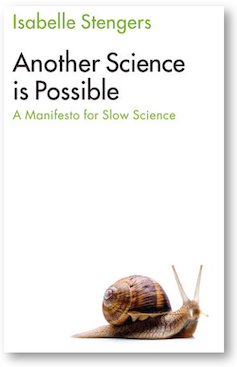 In her book, Stengers says that in order for the work of scientists to be relevant, they have to negotiate with a broader public and respect their questions. Things like: Why are you doing this work? What will it be used for?

The public might have to be prepared to wait for an answer, because the scientists are “still working on it”. But we have the right to be included in the conversation, she argues, as an “intelligent public”.

But there is a narrower kind of relevance that worries Stengers: the triumphant growth of what she calls the “knowledge economy”, one that has no time for hesitation.

Over the years we have seen the growth of commercial labs, the reduction of public funding from universities, and the weakening of regulatory agencies such as the US Environmental Protection Agency.

Stengers says this privatisation of science means that industry can buy the results it wants. And it wants them quickly, before their competitors get the product to market.

This puts the sacred peer review process – which safeguards objectivity and disinterestedness – under pressure, and peers might even forget to ask those basic public-interest questions (Why are you doing this? What will it be used for?).

The need for slow science

Slow science has something in common with the other “slow” movements, like slow food, but it does not hearken back to an imagined golden age. There is still plenty of slow, careful science among the contemporary sciences, but Stengers’ manifesto claims it is under threat.

To the extent that fast science wants results within a budgetary time frame, then thoughtful hesitation can be accused of lacking decisiveness, at the executive level, or even impeding progress. Here the exploratory “what if?” questions give way to the more mobilised “and therefore” push.

The other effect of fast science is that its model tends to dominate. The slow sciences value plurality. To the extent they have not given in to the competitive demand for “excellence” and to industrial relevance alone, then there is more of a chance for new ideas, new fields, to develop.

Stengers characterises this as “the goose that lays the golden egg”, and the reason many scientists like to be left alone to develop their own projects.

Homogenisation is also destructive of the productive relationships among scientists and non-scientists, between knowledge and know-how.

For example, the slow scientist will stop to listen to an Indigenous person whose expertise is honed through intergenerational practice, before imposing a more abstract, more universal, “modern” solution to a problem. (Stengers’s last chapter is called Civilising Modern Practices.)

It is in this area that Stengers investigates the gendered nature of science that still keeps young women out, like herself. She turned from theoretical chemistry to philosophy of science as a graduate student because she says it was made clear to her that there was no future for her in research.

Science is more virile when it demands efficiency rather than care, as it aggressively and repeatedly spends time defending real science, as opposed to sciences that might accept they are inevitably entangled with other important values.

Stengers speaks of how the first women primatologists, excluded from the men’s career path, had the time to invent a “slow primatology”. She says the women:

[…] allowed themselves to be affected by the beings with whom they were dealing, looking for suitable relationships with them, putting the adventure of shared relevance above the authority of judgement.

Stengers investigated the fact/value distinction in her teaching in Brussels, where the science students were initially happily thinking that science involved purifying a situation of spurious irrelevant values and opinions. Science was about getting down to the hard facts.

But when she asked them to investigate controversies, like developing genetically modified food – now mostly banned in Europe – they started to see things differently.

Values were no longer the irrational concerns of an ill-informed public, because they were always tied up with what scientists were doing as well. For instance, those cheerleading for GM food producers insisting they were doing exactly what European peasants had done for centuries, just more efficiently.

Stengers says the students discovered that there were:

[…] many conflicting types of “facts”, and that each of them was linked, for those presenting them, to what appeared to be important in the situation.

She ended up being:

[…] impressed by the fact that, far from being plunged into chaos, confusion and doubt, at least some of [the students] seemed to experience a feeling of liberation. It was as if they had discovered with relief that they didn’t have to choose between facts and values, between their scientific loyalty and (the remains of) their social conscience, because it was the situation itself that required them to identify the relevance of a knowledge and to understand its selective character – what it makes important, what it neglects. It was as if this curiosity so often associated with science was being called upon and nourished for the first time.

Slow science is a reminder of what is wonderful and creative in scientific work, and that it may be worthwhile for scientists to foster public relationships, especially when they feel under pressure to deliver.