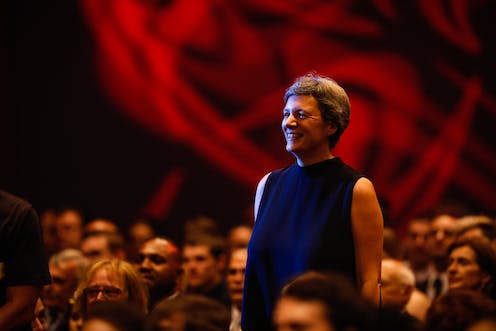 UNSW Scientia Professor Michelle Simmons has been awarded the 2018 Australian of the Year.

The prize recognises Simmons’ research and leadership in nanotechnology and quantum computing. Among other work, in 2012 her research group created the world’s first single-atom transistor and narrowest conducting wires, just four atoms wide.

For Simmons to be awarded 2018 Australian of the Year suggests recognition of recent maturity in quantum computing technology, and its strategic importance for Australia.

Lloyd Hollenberg from the School of Physics at University of Melbourne said of Simmons:

Her contributions in building devices based on single atoms are legendary, and her incredible focus and leadership has defined Australia’s position in the quantum computing technology race.

The rise of quantum computing

In 2017 Simmons established Australia’s first quantum computing company, Silicon Quantum Computing, bringing together representatives of governments, industry and universities in an A$83 million consortium based at UNSW. Simmons is also Director of the Australian Research Council Centre of Excellence for Quantum Computation & Communication Technology (CQC2T).

Today, there is an international race to build a quantum computer and the field is highly competitive - nicknamed the space race of the computing era.

A quantum computer is more than a computer with atomic-scale components.

Classical computers operate on binary logic – based on bits, binary digits where 1 or 0 represent the logical states “true” or “false”. A quantum computer, on the other hand, operates on quantum bits or “qubits”, which apart from 0 or 1 can also be in a quantum superposition of 0 and 1. A quantum superposition cannot be interpreted as either 0, nor 1, nor as both 0 and 1, nor as neither 0 nor 1, but rather follows the counterintuive – but mathematically well-defined – laws of quantum mechanics.

The quantum rules allow for more general operations than classical logic. As a result, quantum computers could theoretically solve some classes of problems exponentially faster than the best known algorithms running on classical computers.

One of the early examples of an exponential quantum advantage was in factoring large numbers, which could allow a quantum computer to break the security of widely-used internet cryptography protocols (a security-sensitive application that was responsible for much of the initial burst of interest and investment in the field).

A full-scale quantum computer capable of such a feat is likely still decades away, due to the difficulties in keeping large numbers of qubits in quantum superpositions and avoiding errors. But the field is abuzz with excitement for the impending possibility of achieving “quantum supremacy” – an unambiguous demonstration of a computational task where a quantum computer can outperform today’s best supercomputers.

The prospect of this psychologically important milestone has accelerated investment in the field. From a handful of qubits only a couple of years ago, global players like IBM and Intel have recently announced prototype devices with up to 50 and 49 qubits, respectively – near the threshold where it is believed that quantum advantage kicks in. Google also reports to be working on a 49-qubit device. Much research is now devoted to the search for practical problems, such as molecular simulations, optimisation, or machine learning, where near-term quantum computers may provide a commercially viable advantage.

In this competitive environment, Simmons’ award recognises her leadership in helping Australian industry to capitalise on public investment in the field – there are now three Australian Research Council Centres of Excellence on quantum physics and related technologies. With the establishment of Silicon Quantum Computing Pty Ltd, Simmons reportedly aims to retain intellectual property and boost quantum computing industries and spin-offs in Australia.

The UNSW research program focuses on making qubits out of single atoms of phosphorus or quantum dots in silicon. One advantage of this scheme is that silicon is industrially-compatible, forming the basis for the existing computer and electronics industry. Simmons said that US funding agencies describe the work as “having a two- to three-year lead over the rest of the world.”

Maths and science focus at 2018 awards

In addition to physics, mathematics and biology were recognised in the 2018 Australia Day awards.

What is a fraction? Mr Woo can help.

The 2018 Senior Australian of the Year is ANU biophysicist Graham Farquhar. Farquhar’s research career has focused on photosynthesis – the process through which plants convert light energy into stored energy – and how we might harness this to solve global food insecurity.

The 2018 Young Australian of the Year is sportsperson Samantha Kerr.