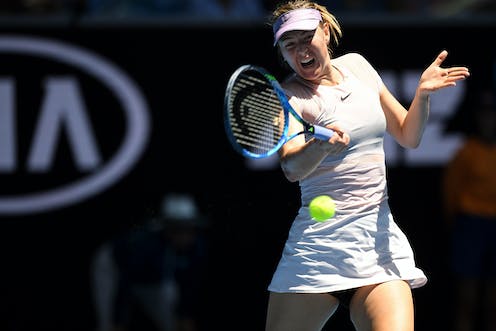 One of tennis’ perennial debates has ignited early at this year’s Australian Open, after Belarusian player Aryna Sabalenka was accused of grunting too loudly during her first-round loss to Australian Ash Barty.

One of tennis’ perennial debates has ignited early at this year’s Australian Open, after Belarusian player Aryna Sabalenka was accused of grunting too loudly during her first-round loss to Australian Ash Barty.

In the past, former world number one Martina Navratilova has gone so far as to suggest grunting is cheating. She argues it may hamper an opponent’s capacity to hear the ball striking the racquet, which is an important element of shot preparation. But what does science have to say?

There are two aspects to grunting and tennis performance that have generated research interest.

Does grunting negatively impact an opponent?

There has been some preliminary experimental work that showed grunting may mask important auditory information used by an opponent.

Participants in a study were asked to watch video clips of a professional tennis player striking the ball with or without an accompanying auditory stimulus (a grunt). Their task was to determine as quickly and accurately as possible whether the ball was being hit to their left or right side. Results revealed the grunt did impair the speed and accuracy of their directional decision-making.

Taking the results from the lab onto the court, it has been suggested that the 30-millisecond delay in responding when an additional auditory stimulus is present would mean a typical rally shot would be picked up two feet later, relative to when no grunt is present.

This means more time pressure on the opponent and less preparation time, which is certainly not advantageous to their performance.

How a grunt impairs performance is less clear. As anecdotally suggested by many professional players, a well-timed grunt can mask important auditory information used by a player as the racquet strikes the ball. Another suggestion is that a grunt could draw a player’s attention away from the sound of racquet-ball contact to the actual grunt, which in turn may impair their timing.

Finally, a grunt may draw visual attention away from the processing of the visual information conveyed at racquet-ball contact. There is currently no clear evidence to support any of these suggestions.

When the impact of a grunt is investigated, there is evidence that hitting performance is enhanced. Skilled university tennis players were found to hit with a 3.8% increase in groundstroke hitting velocity when they grunted.

For a serve, a 4.9% enhancement in velocity was found among players who grunted. This translated to “grunted serves” being hit 7km/hr faster than those that were not.

While the increase in hitting velocity came at no additional physiological cost, in relation to perception of effort and energy consumption, there was an increase in force production as measured by muscular activity. Overall this suggests that grunting is performance-enhancing, and is a sustainable strategy over the course of a match.

Do we have to continue to put up with grunting at the tennis?

First, it’s important to note that it’s quite natural to grunt when exerting the type of effort that tennis players do during a match. As many spectators will attest, the grunting can go up a level as a rally drags on. But when is the grunting excessive and seemingly more for dramatic effect than in response to exertion?

It’s true that not all grunts are the same, and it’s on these occasions – during crucial points – where grunting may inhibit an opponent’s performance.

While Barty claimed Sabalenka’s grunting wasn’t a distraction and she can deal with it (and clearly did, given she won), would players would continue to be so charitable if they knew they were losing precious preparation time on each stroke?

Sadly, the science is not yet in on what’s a fair grunt. But equally, given the amount of successful players who are known “grunters” – often-cited culprits include Maria Sharapova, Serena Williams and Rafael Nadal – a resolution is probably some time off.