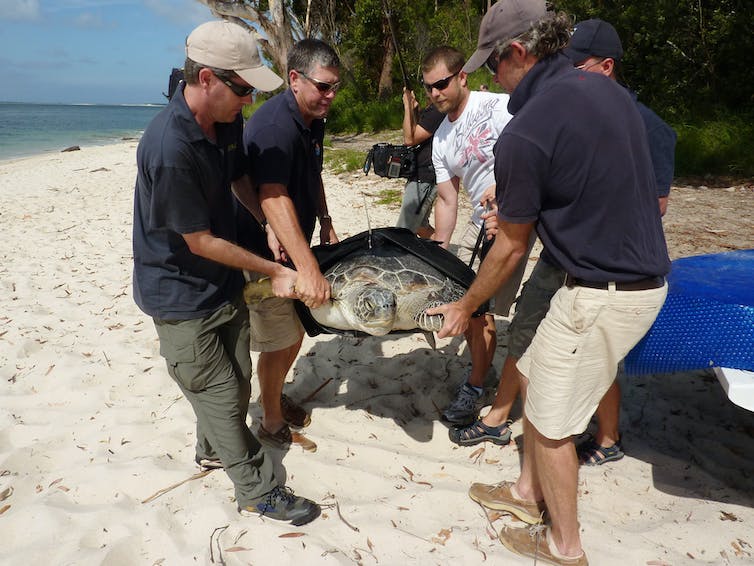 In the northern part of Australia’s Great Barrier Reef, the future for green sea turtles appears to be turning female.

A recent study has revealed that climate change is rapidly leading to the feminisation of green turtles in one of the world’s largest populations. Only about 1% of these juvenile turtles are hatching male.

In the northern part of Australia’s Great Barrier Reef, the future for green sea turtles appears to be turning female.

A recent study has revealed that climate change is rapidly leading to the feminisation of green turtles in one of the world’s largest populations. Only about 1% of these juvenile turtles are hatching male.

Read more: What does climate change mean for sea turtles?

As current climate change models foresee increases in average global temperature of 2 to 3ºC by 2100, the future for these turtles is in danger. Worryingly, warmer temperatures will also lead to ocean expansion and sea-level rise, increasing the risk of flooding of nesting habitats.

How scientists are tackling the problem

Green sea turtles’ sensitivity to incubation temperatures is such that even a few degrees can dramatically change the sex ratio of hatchlings.

Sea turtles are particularly vulnerable because they have temperature-dependent sex determination, or TSD, meaning that the sex of the offspring depends on the incubation temperature of the eggs. This is the same mechanism that determines the sex of several other reptile species, such as the crocodilians, many lizards and freshwater turtles.

Scientists and conservationists are well aware of how future temperatures may threaten these species. For the past two decades they have been investigating the incubation conditions and resulting sex ratios at several sea turtle nesting beaches worldwide.

Scientists and conservationists are working hard to implement conservation measures to prevent the extinction of green sea turtles. AAP

This is mostly done using temperature recording devices (roughly the size of an egg). These are placed inside nest chambers among the clutch of eggs, or buried in the sand at the same depth as the eggs. When a clutch hatches (after 50 to 60 days) the device is recovered and the temperatures recorded are analysed.

Research has revealed that most nesting beaches studied to date have sand temperatures that favour female hatchling production. But this female bias is not immediately a bad thing, because male sea turtles can mate with several females (polygyny). So having more females actually enhances the reproductive potential of a population (i.e. more females equals more eggs).

But given that climate change will likely soon increase this female bias, important questions arise. How much of a female bias is OK? Will there be enough males? What is the minimum proportion of males to keep a sustainable population?

These questions are being investigated. But, in the meantime, alarming reports of populations with more than 99% of hatchlings being female stress the urgency of science-based management strategies. These strategies must be designed to promote (or maintain) cooler incubation temperatures at key nesting beaches to prevent population decline or even extinction.

The challenge of reversing feminisation

There are two general approaches to the problem:

Coastal vegetation also protects the nesting beach against wave erosion during storms, which will worsen under climate change. This strategy further requires coastal development to allow for buffer zones. Construction setback regulations should be enforced or implemented.

When natural shading is not an option, clutches of eggs can be moved either to more suitable beaches, or to hatcheries with artificial shading. Researchers have tested the use of synthetic shade cloth and found it is effective in reducing sand and nest temperatures. 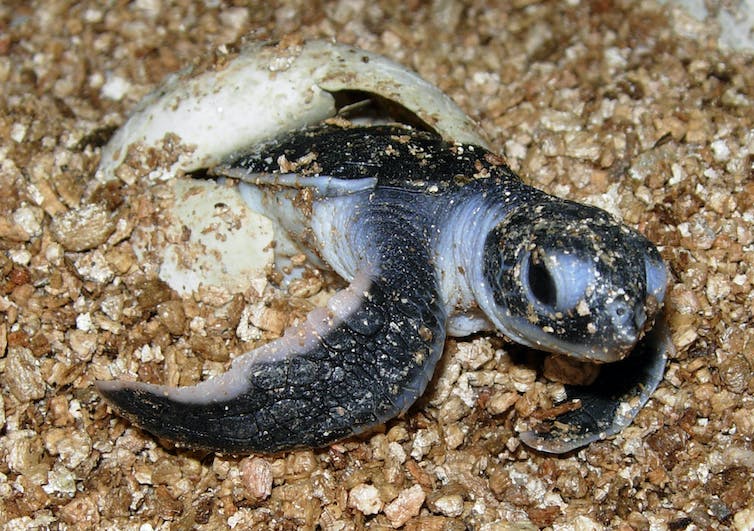 Other potential strategies involve adding light-coloured sand on top of nests. This can help by absorbing less solar radiation (heat) compared to darker sand. Beach sprinklers have also been tested to simulate the cooling effect of rainfall.

The effectiveness of these actions has yet to be fully tested, but there is concern about some potential negative side effects. For example, excess water from sprinklers may cause fungal infections on eggs.

Finally, as much as mitigation measures are important, these are always short-term solutions. In the long run, prevention is always the best strategy, i.e. protecting the nesting beaches that currently produce more males from deforestation, development and habitat degradation.

Our recent research on the largest green turtle population in Africa reports unusually high male hatchling production. We found almost balanced hatchling sex ratios (1 female to 1.2 males). We attributed this mostly to the cooling effect of the native forest.

This, and similar nesting beaches, should be designated as priority conservation sites, as they will be key to ensuring the future of sea turtles under projected global warming scenarios. 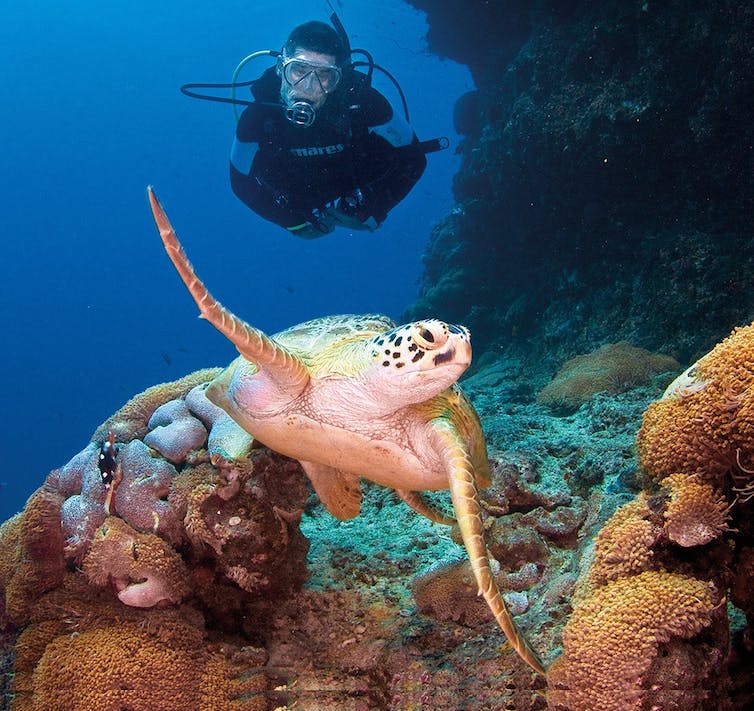 A diver follows a green sea turtle though the waters of Bait Reef, Queensland. AAP

Sea turtles are resilient creatures. They have been around for over 200 million years, surviving the mass extinction that included the dinosaurs, and enduring dramatic climatic changes in the past.

There is potential for these creatures to adapt, as they did before. This could be through, for example, shifting the timing of nesting to cooler periods, changing their distribution to more suitable habitats, or evolution of critical incubation temperatures that produce males.

Read more: Turtle hatchlings lend each other a flipper to save energy

But the climate today is changing at an unprecedented rate. Along with the feminisation of these turtles in the northern Great Barrier Reef, sea turtles globally face many threats from humans. These include problems associated with by-catch, poaching, habitat degradation and coastal development, plus a history of intense human exploitation.

In 2018, the prevalence of these species depends now more than ever on the effectiveness of conservation measures.