It is not all about Donald Trump.

To be sure, an erratic American presidency contributes to unsteadiness around the globe. American global leadership is now contested as never before since the Allies triumphed in the second world war.

Even in the depths of a Cold War marked by various crises – including the Berlin Blockade, an ill-starred military adventure in Vietnam, and the Cuban Missile Crisis – American leadership would still assert itself.

Let’s not forget American post-second-world-war diplomacy spawned international institutions like the World Bank and International Monetary Fund, the General Agreement on Tariffs and Trade, the United Nations and NATO. In Australia’s case, it also gave birth to the ANZUS Treaty, initialled in 1951. 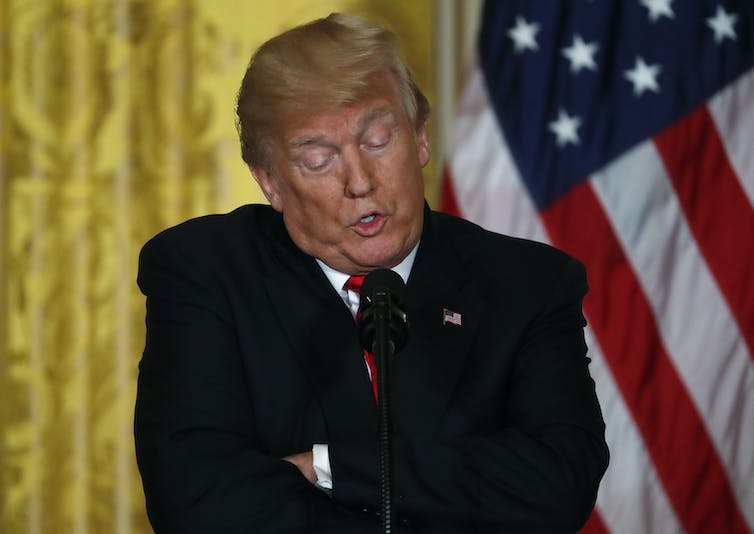 … although it is a little bit about Donald Trump. Reuters/Jonathan Ernst

There was hardly any component of post-war global architecture that did not involve Washington in a leading role.

ANZUS, and with it the American alliance, remains the cornerstone of Australia’s security arrangements – notwithstanding a frequent misinterpretation of the treaty as a security guarantee as opposed to an agreement to consult in the event of either party’s security being threatened.

In essence, America is godfather of post-war multilateralism. An American-led consensus on how best to manage its global responsibilities is now in danger of unravelling, buffeted by domestic “America First” disagreements at home and a contested security environment abroad.

Australia’s place in the world

From an Australian perspective, it is all about a shifting power balance in the Indo-Pacific.

This might be described as the pre-eminent challenge in the year(s) ahead, as Australia navigates between the idiosyncracies of a Trump White House and its successors. Then there is the relentless Chinese push to spread its power and influence.

Above all in the foreign policy sphere, Australian policymakers are faced with the task of expanding Canberra’s foreign and security policy room for manoeuvre between its security guarantor and principal trading partner, without endangering the alliance relationship itself. 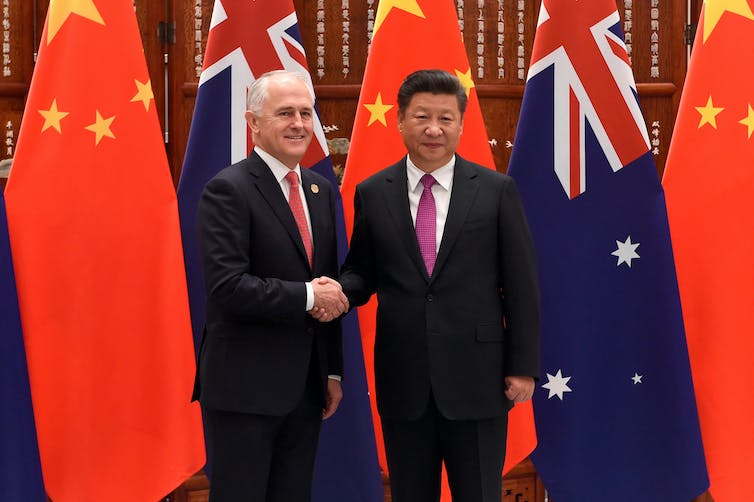 China, led by Xi Jinping, will continue to push to spread its power and influence. Reuters

This will require a sophistication that has not always been apparent among policymakers. Their instinct has been to cling to the alliance like a life raft and, on occasions, discreditably, use it as a wedge issue against political opponents.

China’s rise is encouraging a more realistic view of Australia’s geopolitical circumstances, and none too soon.

The following extracts from Australia’s Foreign Policy White Paper, released in November, provide a flavour of that greater realism:

Navigating the decade ahead will be hard because as China’s power grows our region is changing in ways without precedent in Australia’s modern history.

Powerful drivers are converging in a way that is reshaping the international order and challenging Australia’s interests. The United States has been the dominant power in our region throughout Australia’s post-second-world-war history. Today, China is challenging America’s position.

The government recognises there is great debate and uncertainty in the United States about the costs and benefits of its leadership of the international system.

In the decades ahead we expect further contestation [between the US and China] over ideas and influence, directly affecting Australia. It is imperative that Australia prepare for the long term.

All of this exposes Australia’s biggest challenge in the next several decades. Simply put, this is to build its own self-reliance, including smart investments in defence capabilities, along with nurturing security relationships in its own region.

Most desirable in all of this would be to involve – not exclude – China in building a regional security architecture. This could possibly be along the lines of the Helsinki Accords, which helped stabilise Europe during a long stand-off with the former Soviet Union.

Australian officials might want to expand a quadrilateral Indo-Pacific security partnership – involving the US, Japan, Australia and India – envisaged as a hedge against China to others, including China itself.

Creative regional diplomacy of the sort that brought about the establishment of the Australia Pacific Economic Co-operation (APEC) forum would seem to be required.

This is the big global challenge for Australia in 2018 and beyond. Now to what might be described as “localised” challenges.

We’ll restrict that number to five, including: 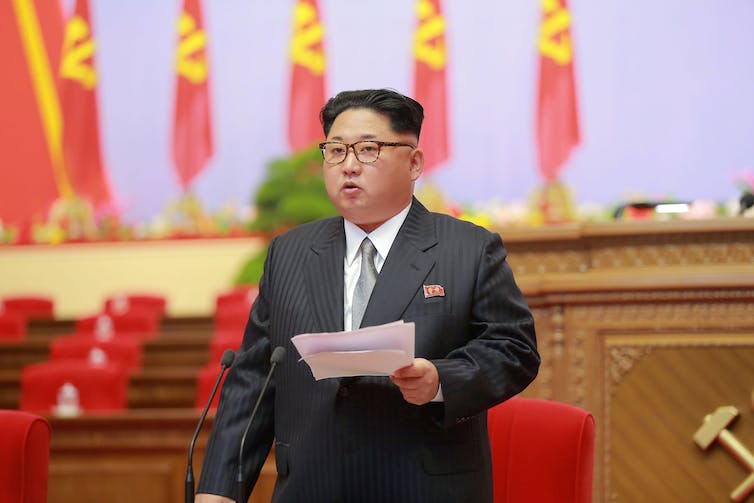 At the top of the regional challenges is North Korea, led by Kim Jong-un. Reuters/KCNA

Top of this list is North Korea, where the risk of overreach and accident with terrible consequences is real. As Malley puts it in his Foreign Policy paper:

Without a viable diplomatic offramp, Washington risks cornering itself into military action. Even a precisely targeted attack would likely provoke a North Korean response.

From Australia’s perspective, and given that the bulk of its trade goes to the countries of North Asia (China, Japan and South Korea), conflict on the Korean Peninsula would be crippling.

Second on my list, as it is on Malley’s, involves the risks of open conflict between Iran and Saudi Arabia, egged on by the US and Israel. Such disruption could not be contained. It would spread, risking oil shipments from the region and wider conflict between Sunni and Shia.

As Malley puts it:

With so many flashpoints, and so little diplomacy, the risk of an escalatory cycle is great.

From an Australian perspective, an escalation would be alarming, given the deployment of our forces in a training capacity in Iraq.

Third is Afghanistan, where the tempo of US-led strikes against the Taliban is set to increase, along with pressure on Pakistan to desist in its covert support for the insurgency.

US allies in Afghanistan should push for a greater diplomatic political component to the US strategy. As it stands, that strategy sets the stage for more violence while closing avenues for de-escalation.

With troops in the field in a training capacity, the Australian government should be pushing for a regional settlement, involving Afghanistan’s neighbours and the insurgents. 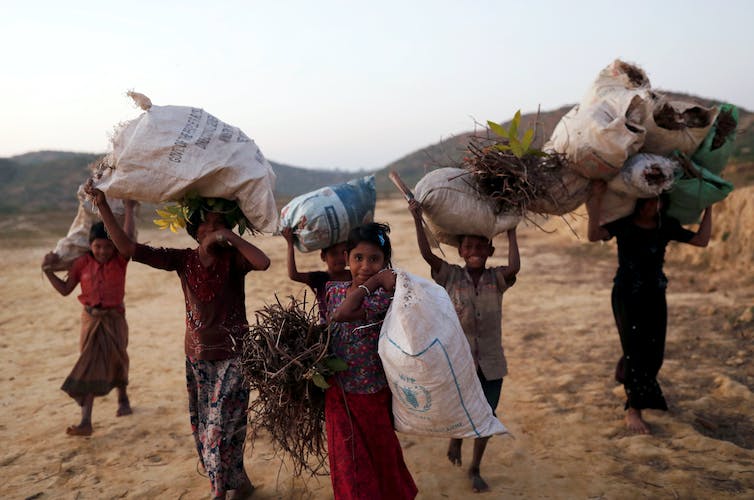 Fourth on my list is the issue of identity policy in southern Asia, including the displacement of the Rohingya to neighbouring Bangladesh.

As Bremmer and Kupchan put it:

From Australia’s perspective, displacement and persecution of minorities in its neighbourhood is a particularly worrying development, along with Islamic State-inspired eruptions in countries like the Philippines.

The biggest fight over economic power centres on the development of new information technologies. Competition for dominance in the areas of artificial intelligence and super-computing between the US and China has serious implications for Australia’s national security.

The cyber issue, which potentially includes the weaponisation of AI, is becoming the new contested space.

And that’s not all …

Now, to a less concerning issue, for the moment: the global economy.

In its latest overview, the World Bank expects global growth to edge up to 3.1% “after a much stronger-than-expected 2017, as the recovery in investment, manufacturing and trade continues, and as commodity-exporting developing economies benefit from firming commodity prices”.

As one of the world’s biggest commodity exporters, this is good news for Australia. The World Bank says:

2018 is on track to be the first year since the financial crisis that the global economy will be operating at or near full capacity.

However, it also warns of a slowdown in potential growth as stimulatory fiscal and monetary policies run their course.