If we really care about protecting the people who make the things we wear and use, we need to raise wages for workers in supply chains to above the poverty line. Our research shows that this only requires a 20 cent increase in the Australian retail price for a T-shirt made in India.

Read more: Explainer: what exactly is a living wage?

The living wage is the income required for a decent standard of living for a worker and their family. It lifts the worker above the poverty line and is defined by the costs to meet basic needs such as food and shelter. It also limits the number of working hours per week required to meet these needs.

A living wage has long been advocated as a way to support vulnerable and exploited workers. About 42% of all workers globally are in insecure jobs and have no social protections, 29% remain in moderate to extreme poverty and about 25 million people are in slavery.

Many of the goods we now buy are part of global supply chains. Since the 1980s the production of labour-intensive products such as textiles and footwear has shifted to countries with low-cost labour.

Cost-cutting often impacts those with the weakest bargaining position, such as cotton farmers - cotton prices have been on a downward trend over the past decade. Without realising it, our demand for low prices can cause vulnerable workers in other countries to work for less than a living wage.

The living wage gap may be larger or smaller on particular farms or factories, but a 20 cent increase on average would be sufficient to lift all Indian workers in the garment supply chain out of poverty. 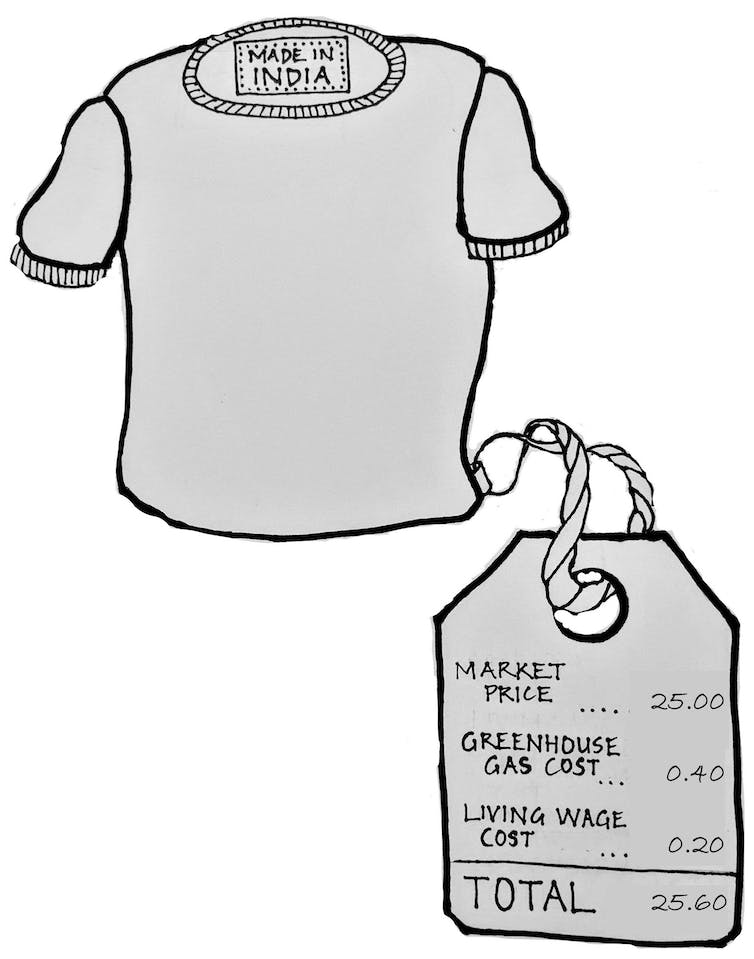 The small cost to address poverty and climate change for producing a T-shirt in India. Murray Hall.

The cost to close the living wage gap in developing countries is small because wages for workers in these countries make up only a fraction of the retail price charged in countries like Australia.

Our work shows it costs about A$5.30 to produce a T-shirt in a country like India and ship it to Australia. The remaining costs embedded in a A$25 T-shirt come from warehousing, distribution and retail costs within Australia itself.

As a result, a 20 cent increase represents a less than 1% increase in the Australian retail price. It would cost only another 40 cents to cover the cost of greenhouse gas abatement. This means an ethically made T-shirt would only cost 2.5% more than current prices.

A roadblock to implementing living wages is simply knowing the source of materials. Only about 7% of fashion companies in Australia know where all of their cotton comes from. Unless an Australian retailer specifies the source of cotton, the decision is made by the overseas textile contractor, often based on price.

Another challenge is that we need an accepted method for calculating and auditing the payment of living wages in the supply chain. The retailer needs to know how much the cotton farmer should be paid and have a system to check it has been done.

Over the past four years consumer pressure has pushed fashion companies to understand their supply chains and to consider paying living wages, but there is still a long way to go.

Read more: What businesses can do to stamp out slavery in their supply chains

In 2012 a group of the world’s largest ethical trade organisations formed the Global Living Wage Coalition.

This organisation has developed a manual for measuring the living wage and requiring? living wages to be paid to their producers. The producers are audited along the supply chain and in return can advertise their compliance with ethical standards. Shoppers will soon be able to look for a label - similar to the Fairtrade symbol - to know that living wages have been paid throughout the supply chain.

The famous economist John Maynard Keynes argued that consumers are not entitled to a discount at the expense of the basic needs of workers. In fact, we only need to pay a small amount more to provide a living wage and make a big difference to the world’s poorest workers.